I waited a long time to get my grubby paws on this new Mercedes-AMG A 45 S 4Matic+. Lockdown did not help, but today was finally the day — not only for that much anticipated spin, but also for the first real car launch I’ve had the pleasure of attending since this whole sordid affair commenced.

Anyway, I was particularly interested to learn how the car that they say has reclaimed its fastest 2-litre in the world claim shapes up. Its predecessor impressed immensely when it first threw that Benz cat among the hot hatch pigeons back in 2013, but it has since had some pretty handy rivals come to challenge it, not least an ever-improving Golf R and the Audi RS3, both of which since made claim to that “King 2-liter” crown.

And was it an omen when I peeked at Facebook at breakfast and my memory for the day just happened to be the seven-year anniversary of my post of that original AMG 45 launch at Kyalami? I loved the nuance — all it did was sharpen my anticipation of the day.

The big question, is, is the new one really better? And is it as big a step forward as Benz has led us to believe?

Intrigued by that seven-year coincidence, I dug up my report from back then, where I signed off that, “A45 AMG brings the sum of its splendid nuances together in a brilliant whole, which leads me to use that hackneyed phrase to conclude, the King is dead — long live the Hatchback King.”

Zwartkops Raceway is a splendid little facility about 20 miles north of Kyalami, where with all the protocols attended to, the suits extolled new A 45 S’s many virtues. I then had a couple of opportunities to dust off some considerable Covid cobwebs with a few laps behind the wheel of little brother AMG A 35, itself a most impressive package — even on the tight confines of this tight raceway.

There’s something special about a yellow car, so I rushed to claim the canary-coloured 45 S and for my session. It’s an imposing car even without a crazy colour, that much is for sure — now clearly one of the family with its AMG-specific grille, A 45 S gains broader front wings and flared arches to accommodate an increased front track. 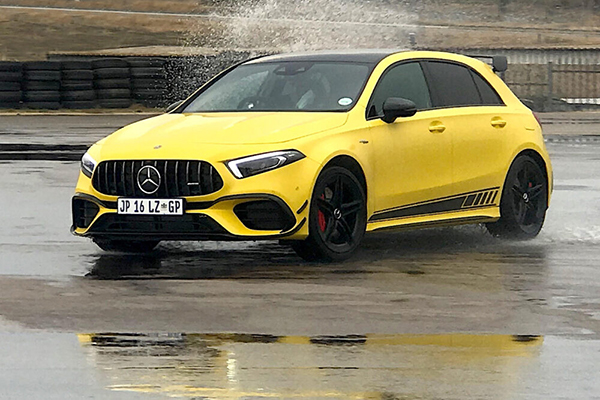 Better Aero
There’s also a “jet-wing” front apron, fatter AMG side skirts and that aggro rear wing above quad 90mm AMG tailpipes at the back. The Mercedes-AMG A 45 S however really stands apart from the moment you prod the starter button and that all-new 416 HP 369 lb.ft 2.1-bar twin-scroll roller bearing turbocharged M139 2-liter, 4-pot rumbles to life.

The engine was of course built in AMG’s One Man, One Engine factory, but most significantly, it’s been swung through 180 degrees to turn the inlet to the front of the engine bay, with the exhaust and all the turbo gadgetry now packed behind. 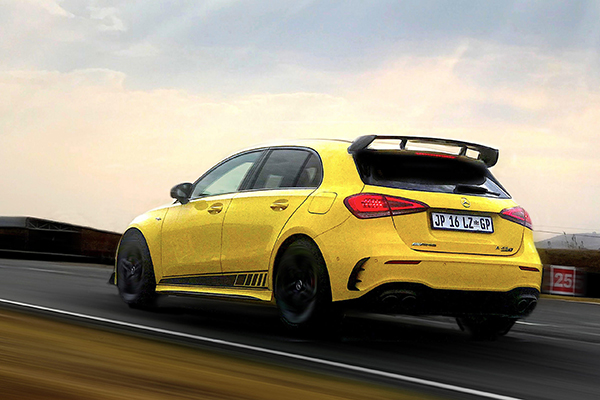 Better Ram Air
Not only does all that improve airflow to the engine, but it also adds a better ram-air effect at speed, while two-stage piezo injectors, an electronically controlled wastegate, multiple water pumps to separately cool the cylinder head and crankcase, and mirror-like F1-derived Nanoslide coated cylinder linings add to A 45 S’s quite exotic engine specification.

And just in case all that is not enough, 45 S gets AMG’s new Speedshift DCT 8G dual-clutch transmission complete with a Drift Mode in the optional AMG Dynamic Plus package, but more about that later. DCT 8G also packs in a delightful Race-Start.

So, unlike some of its rivals, which need you to earn a PHD before you can work their launch systems, all you need do in this AMG, is select Race mode, stand on the both gas and the clamps together, let it blatt-blatt-blatt for a second or two, and slip the left foot off the brake pedal. That releases AMG 45 S to quite literally pounce at the horizon. They promise that it rushes to 60 mph in just 3.9 seconds.

Zwartkops has a ballsy lefthand T1 that A 45 S already needed a dab on the brakes to turn in to, despite coming off that standing start, before the clamps are needed in full for the hairpin right-hander that follows.

As the session progressed I quickly discovered that the brakes love to be abused and a few laps in, it was squirming about beautifully as I jumped on them way beyond the marker cones. Still it retarded splendidly as the punch holes whirred under the extreme pressure to slow the car supremely at every braking point, lap after lap.

A 45 S also demands to be turfed into corners — the harder you slam the steering, the better it responds, even though the more street oriented rubber protested quite loudly every time. From there it follows through wonderfully though — this chassis is tight enough to report the systems working, as the selectively spilt central and totally variable electronically controlled dual multi-disc clutch AMG Torque Control rear differentials work tirelessly at apportioning power between the four corners of the car.

You never really notice Zwartkops’ Turn 3, unless you’re driving something really quick, like a 911 Turbo S or a Nissan or this car’s big brother AMG GT R, but AMG 45 S also makes that into a corner that needs your full attention. It took a lap or two to accept to just pin it through there.

Then it’s the tight uphill Turn 4, which takes the chassis Gs to the maximum while also displaying a surprisingly rear-wheel drive like feel — this AWD car is pretty taily when you induce a little turning moment into it.

AMG on the ‘Table Top’
They call Turn 5 the Table Top — its braking point is blind, so it really is a hoot. The 90-degree right-hander that follows once again tortures the 245/35 R 19 rubber wrapped around my yellow car’s black 5-twin-spoke 19-inch 8.5J light alloys, but 45 S does everything brilliantly through there — there’s hardly any lean and it feels just like a race car. In every respect.

It should be — tauter and stiffer than even the 35, the 45 S gains several cross braces, an extensively reinforced chassis and even a lightweight aluminium ‘shearing plate’ under the engine, while all its mountings must be stiffer too because it really feels racecar refined on track. This is a proper performance car, no doubt about it.

A 45 S blasts along the short plateau out of T5, before another hard dose on the brakes is followed by the superbly responsive steering responding mightily to another aggressive yank on the wheel as the front darts into another right hand hairpin in T6. That’s quickly followed by a brutal on-the-power switch left into T6, for which you really should brace your neck.

I suppose its frequency-selective adaptive AMG dampers with optional three-mode AMG Ride Control and high performance coil springs are to blame for that. AMG’s marketing men had promised exceptional directional stability, most dynamic cornering and limited body roll, but the level of vehicle dynamics really do take A 45 S’s sporty driving experience to the next level.

Out of seven, AMG 45 S bullets down the hill into the final Turn 8, where those brakes once again protest as they take hot hatch retardation to another level, before it turns in on that ticket and rocketing on down the pit straight to commence another blinding lap.

They asked why I was smiling so broadly as I stood there after half a dozen laps next to my 45 S tick-tick-ticking while the heat sank. I just kept on grinning. Sure the tyres were well past their best and the car became a trite sloppier as a result, as the tours reeled off, but everything else about A 45 S just kept on singing along.

No long pedal, no hot floor under the foot, no side-effects whatsoever. This is one hugely capable street car on track. Of course if you throw a set of Michelin Sport Pilots, semi-slicks or similar at it, that track-oriented rubber will most likely not drop off at all.

We were not finished yet — remember the Drift Mode I mentioned earlier? Well, the lads from AMG had another little exercise prepared for us on the skid pan, which also proved most enlightening as to this car’s progress into its second coming.

You first need to work through a few programming steps to prepare and select both Race and Drift modes, during the course of which the car’s tone becomes considerably more gruff as the AMG Exhaust opens up, to add to the quite direct — even brutal attitude of the chassis setup.

Drift mode utilises all of AMG A 45 S’s newest chassis features to best effect and while the ghost in the machine requires you to re-learn the nuances of drifting and to adopt a bit more of a push attitude to get the rear-biased AWD system to work at its best, once you have the hang of it, it really is impressive. Add a little empathy in throttle control, and this car makes for quite the drift tool, too.

Still, there is Comfort
Surprisingly, in spite of all this, AMG promises that ride comfort has also been improved over the previous model in comfort mode, which makes us wonder if we’ve forgotten how harsh that must have been.

Let’s just say that this car is honest about what it’s driving over, even in its most pliant mode. Of course, speaking about comfort, the Mercedes-AMG A45 S comes equipped with a sublime cockpit, complete with the ultimate man to machine interface in the auto industry right now. Merc’s impeccable MBUX infotainment with its Starship Enterprise instrumentation crosses most of the dash and features Classic, Sport and particularly striking Supersport modes, the last noted with a racy 3D rev counter and info bars on each side. 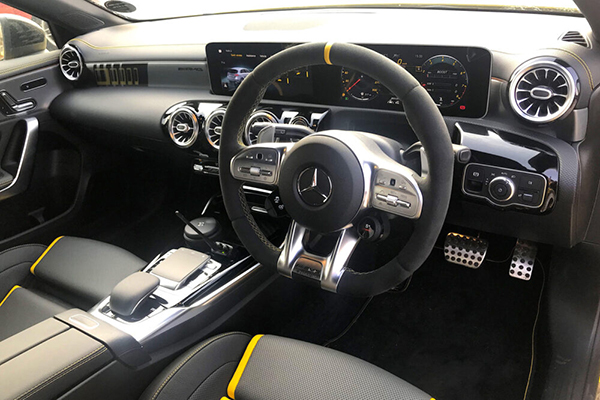 Steering Wheel
A 45 S also has a steering wheel that harks after the device Lewis Hamilton uses — besides the brilliant touchpad and market leading multifunction controls on each stalk, there are a pair of additional controllers just below to ensure one-touch control of all the splendid above mentioned chassis sublimities.

This car’s sophisticated MBUX system adds a fine AMG Track Pace ‘virtual race engineer’ data logging system in the S models, which will come in more than handy if you’re a track day fan, thanks to 80 vehicle specific data points that will go a long way to improve your driving skills as you go.

All those niceties are actually however of secondary importance to the true red-blooded petrolhead, because this car’s real attraction quite simply has to be its quite astounding sporting envelope. Right up top, I mention how I concluded my similar experience of the Mercedes-AMG A45 S’s predecessor’s launch malarkey seven years ago.

To be honest, this car is a most significant step above the car it replaces in every single respect — not only is it considerably more powerful, quicker and faster, but its chassis improvements are night and day enough to marvel how far Mercedes-AMG has progressed in seven short years.

That simply leaves me to once again conclude that the King is Dead. Long Live the Hatchback King!