Sound on! I have taken a new video of the world’s fastest Mercedes-Benz V-Class tuned by GAD-Motors. They have taken the 4.0 Liter V8 Biturbo engine and the Carbon-Ceramic-Brakes out of the Mercedes-AMG GT-R and put that into a V-Class. The 585 horsepower V-Class has been caught endurance-testing by Andreas Gülden, Chief Instructor and Head of the Driving Academy, at the Nürburgring.

Most people see it as a more luxurious, passenger version of a cargo van, and they aren’t that far off the truth with that opinion, but there is more than meets eye with the V-Class.

You see, the commercial van upon which it is based is called the Vito, otherwise known as the Metris in the United States, and confusingly, this more rugged model also has a passenger version.

From the outside, you’d be easily forgiven for thinking that the passenger variant of the Vito/Metris is the same thing as a V-Class, but the main differences are found inside, and they are like night and day.

The top trim levels on the V-Class bring almost a similar amount of comfort as an S-Class, but with more available space, and for more passengers.

Not only that, but the V-Class can come with optional creature comforts like air suspension and even electrically controlled sliding doors, which you will never see on a Vito/Metris.

Bought either by families as a vacation vehicle or as a luxury VIP shuttle, you could say that some of the most well-equipped Mercedes-Benz V-Class are almost perfect as they are.

Unfortunately, the V-Class might have already become a victim of its own success, and Mercedes-Benz should do something about it before it’s too late.

I’m saying this because, despite all the extra build quality, luxury features and comfort, the best versions of this minivan aren’t made by Mercedes-Benz, and that it is all because the German carmaker seems to have simply forgotten this model is still part of its lineup.

Over 8 years have passed since the current generation of the V-Class came on the market, and a couple of mild facelifts later, the model is yet to reach its potential.

What Mercedes-Benz doesn’t seem to realize is that this boxy lounge on wheels (in certain specs) could be more than just a premium minivan with a cornucopia of luxury features.

Despite the success of various aftermarket companies that make the V-Class transcend its utilitarian roots, the German carmaker refuses to take the same kind of plunge as it did with cars like the G-Wagen, which seems to have found the elixir of immortality in a world whose new rules should be completely against it.

Because of its age, regulations and even the lack of vision from Mercedes, the V-Class is now finding itself in no-man’s land instead of achieving its potential of becoming a true icon and an instant classic, which on paper it should.

What the model is missing is already found on other Mercedes models, whether we are talking about the Maybach or AMG sub-brands, so it shouldn’t be as hard to put them all together and create the ultimate V-Class.

Until the German carmaker wakes up and smells the roses, others are already taking orders for a car that should have been part of the Mercedes lineup all along. 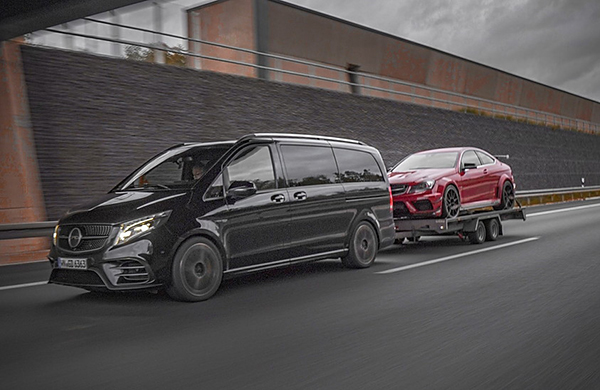 Back in 2020, the company needed a car for 7 people for a private trip in Germany and rented a Mercedes-Benz V-Class.

While the car was wonderful and comfortable to drive, it seemed to lack a bit in the power department, so an idea sprung to mind.

Not satisfied with the lack of grunt of a V 250d, which is powered by a puny, 2.0-liter four-cylinder diesel, GAD Motors decided to transplant a 4.0-liter, twin-turbocharged V8 under the hood of the V-Class.

The hand-built M177 was likely borrowed from a G 63, because its initial output was 585 PS (577 HP), but GAD Motors didn’t stop there, modifying it to deliver around 900 horsepower and thus dialing it up to 11 on the insanity scale.

The brakes were also upgraded to carbon-ceramics and the suspension was replaced with a custom setup that likely comes from KW, a regular GAD Motors partner.

I’m pretty sure GAD Motors will have some issues completing the avalanche of orders they will receive on this instant classic, which is obviously a missed opportunity by Mercedes.

It’s not too late, though, as all the German carmaker has to do now is steal the tuner’s idea and perfect it, while adding some interior refreshments from its latest models.

How would an official Mercedes-AMG V 63 sound, with OEM parts and warranty, available straight from the dealer?

It doesn’t need 900 horsepower or track-ready suspension since nobody will use a van to demolish Porsches on the Nurburgring, although that sentence has a nice ring to it.

No marketing studies need to be conducted to create such a vehicle because nobody really needs it.

An official V 63 would be the answer to a question nobody asked, but that doesn’t mean its success won’t be guaranteed, just look at how the G 63 continuously oversells the less expensive G 500 and G 400d.

In other words, nobody needed over 500 horsepower in a cross-country brick on wheels; the AMG G-Class simply happened.

As they say, ‘if you build it, they will come.’