The third-generation Mercedes-Benz Vito / Metris has been around since 2014, and the mild facelift of 2020 did little to change the looks of the LCV. Thus, Mercedes is preparing a more comprehensive update for 2023, hoping to keep its van relevant for a few more years. 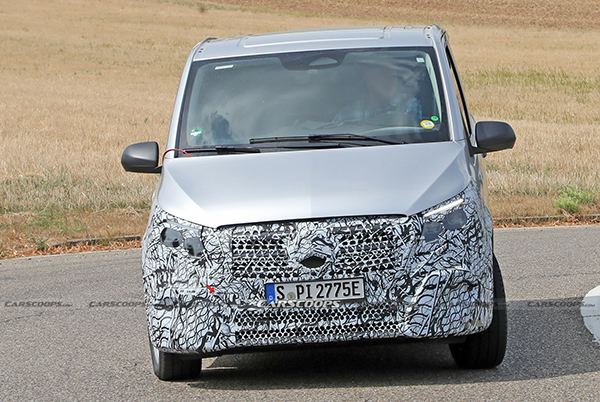 Our spy photographers caught a lightly camouflaged prototype of the Vito in Germany, a few weeks after the spy debut of the facelifted EQV. Similar to the latter, the only parts of the Vito’s bodywork that remain under wraps, are the front bumper, the headlights, the taillights, and portions of the tailgate.

Judging from the camouflage, the Vito will gain a redesigned front bumper featuring a slightly different shape for the intakes, new graphics for the headlights, plus a revised grille, bringing it closer to Mercedes’s current design language. We’re saying that because the virtually unchanged profile retains the character lines found in Mercedes of the previous era, although LCV buyers won’t really care about that. Still, the Vito will be visually differentiated from the slightly more premium-looking V-Class.

Moving over at the back, the updated taillights of the Vito appear to be identical to the upcoming EQV, and it is possible that all variants will inherit LED graphics. The pictured prototype could be an entry-level spec judging from the unpainted bumpers and the basic-looking steelies, although it comes with sliding doors on two sides. Other changes at the back are expected to be minor, focused on the trim, the badge, and the model lettering.

The interior of the prototype was covered so we didn’t get a proper look. Changes in the facelifted Vito’s cabin may or may not mirror the updated V-Class / EQV, which are expected to get reshaped climate vents, and a new digital cockpit with a larger screen and a new digital instrument cluster. The highlight will be a new version of the MBUX infotainment, similar to that used in Mercedes’ passenger car range. 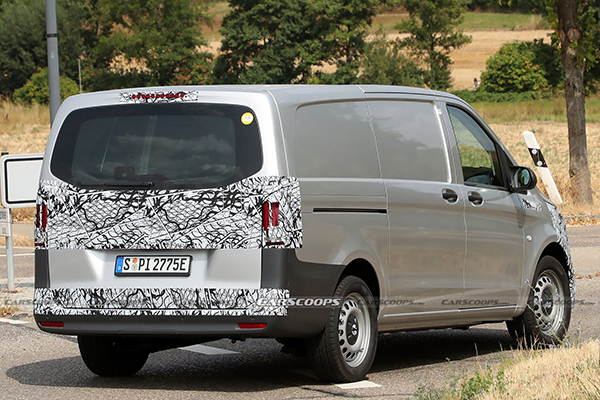 In terms of powertrains, it is likely that Mercedes will update the current 1.7-liter and 2.0-liter diesel engines to meet the stricter emission regulations, while the eVito will still be available as a fully electric alternative with a 90 kWh lithium-ion battery and a 201 hp (150 kW / 204 PS) electric motor at the front.

The facelifted Mercedes-Benz Vito / eVito is expected to debut sometime next year, alongside the facelifted V-Class / EQV (passenger variants) range.