Mercedes-Benz has updated the Vito van range for 2020, adding a handful of cosmetic revisions, a host of mechanical upgrades and, most importantly, a new all-electric drivetrain. The conventionally powered Vito will be available to order at the end of spring, with the electric eVito following this summer. Prices will be confirmed closer to each model’s launch date. 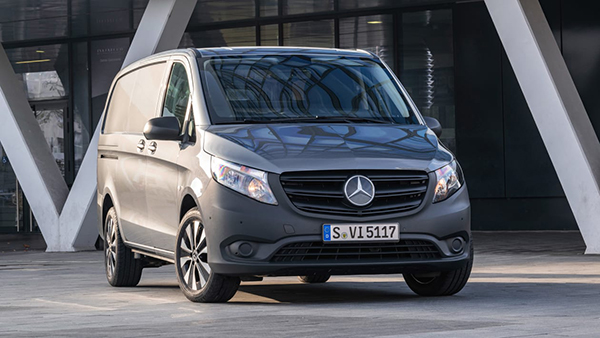 Cosmetic revisions for the new Mercedes Vito include a subtly redesigned radiator grille, fresh upholstery, new interior air vents, a new seven-inch infotainment system, and a host of additional customisation options, including a further four paint colours and a choice of four new alloy wheel designs, ranging between 17 and 19 inches in diameter.

The eVito’s all-electric powertrain is identical to the system found in the recently revealed EQV luxury MPV. It comprises a 100kWh battery pack and a front-mounted electric motor, which develops 201bhp and 362Nm of torque. Mercedes says the eVito has a maximum range of 262 miles and that, when plugged into a 50kW DC fast-charger, it’ll recover a 10–80 percent charge in around an hour and 20 minutes.

Mercedes will continue to offer a range of conventional diesel engines on the Vito – all of which will sit under the electric variant in the van’s pecking order. The combustion-engined range consists of two powertrains and two drive configurations.

The entry-level Vito 110 CDI is powered by a front-wheel-drive 1.7-litre unit, which develops 74bhp and 270Nm of torque. Mercedes says the unit offers respective economy and emissions figures of around 44mpg and between 169–172g/km of CO2. The same engine is also available in the Vito 114 CDI FWD, with an output of 98bhp and 330Nm of torque. 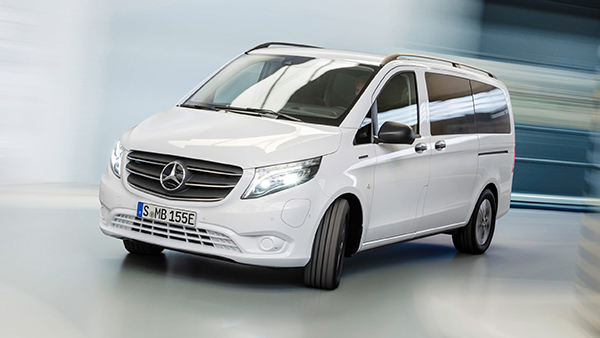 Vito 114 CDI RWD models and above are powered by an updated version of the outgoing model’s turbocharged 2.0-litre four-cylinder diesel unit, which Mercedes says offers improved economy and emissions. Buyers can choose from an output of either 134bhp, 161bhp or 187bhp, and all three units are available with a new nine-speed automatic gearbox.

Buyers can have their Vito van in a choice of three wheelbases and three body styles, including a standard panel van, a crew van and an nine-seat tourer. Mercedes also says the panel van variant boasts the highest payload in its class, offering enough grunt to haul up to 1,369kg.

There’s also an updated range of driver assistance technology. Both Mercedes-Benz’s active brake assist and adaptive cruise control systems can be specced on the Vito for the first time, along with adaptive LED headlamps, a blind spot monitoring system and lane keeping assist. Mercedes also includes a tyre pressure monitoring system as standard.