Mercedes-Benz Trucks has announced a new phase of testing for its eActros electric truck, which has been approved for use as a truck-and-trailer combination with a total weight of 40 tons. 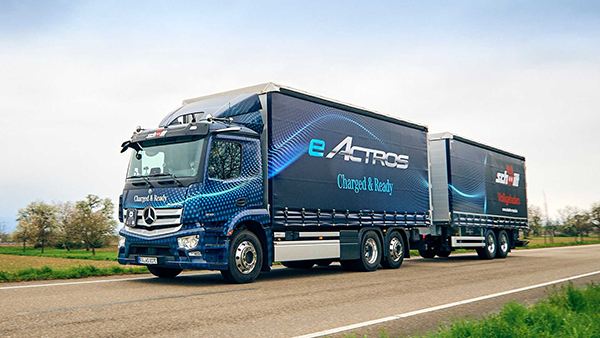 The new practical tests phase for the battery-electric eActros has initiated in Germany’s Northern Black Forest, with the first truck-trailer combo delivered to Logistik Schmitt for endurance testing.

Mercedes-Benz Trucks, which is part of the Daimler Truck (Stuttgart, Germany) division, already accepts orders for this configuration that has the ability to transport twice as many load carriers.

Mercedes-Benz Trucks uses the etruck for several of its routes as part of the long-term testing process, and it will continue to transport transmission housings and axle components to Daimler Truck factories located in Rastatt and Gaggenau. The eActros is covering nearly 300 kilometers (186 miles) every day as part of this operation.

“Starting an intensive exchange with customers at an early stage is an integral part of our vehicles’ development. For this reason, our team has been supporting the practical stage of eActros testing at Logistik Schmitt since 2019,” said Steffen Maier, head of customer testing at Mercedes-Benz Trucks. “Following the successful launch of series production last October, we are now gradually expanding the range of applications for the eActros.”

As mentioned, the truck-and-trailer combination reaches a total weight of 40 tons, but for customers, more important than total weight is its ability to offer considerable more transport volume.

The electric truck deployed to Logistik Schmitt is an eActros 300, designed for operation with a trailer and fitted with a center-axle Rockinger trailer coupling. The accompanying trailer features an internal length of 7.28 meters (23.8 feet) and a permissible gross weight of 18 tons.

The eActros with a trailer is currently the biggest Mercedes-Benz electric vehicle available, at least until the Mercedes-Benz eActros LongHaul semi comes out.

The standard versions of the Mercedes-Benz eActros, the eActros 300 and eActros 400, come with 336 kWh and 448 kWh battery packs, respectively, offering a range of up to 400 kilometers (250 miles).