New EVs are hitting the streets at a rapid clip, but a new battleground in the electric vehicle competition has emerged. Commercial trucks are ripe for electrification, and several companies have thrown their hats into the ring, including Daimler Trucks. Mercedes-Benz Trucks brand already has electric commercial models in production and recently announced a new long-range variant that will come in a couple of years. 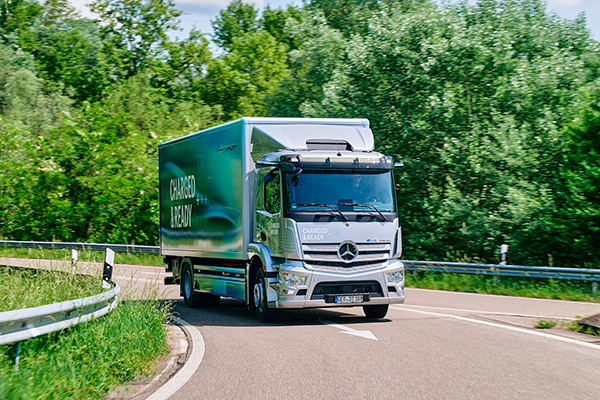 The eActros LongHaul will offer a range of around 310 miles and is set to enter serial production in 2024. Mercedes is already testing the 40-ton truck and says its engineers will begin tests on public roads later this year. Parent company Daimler Trucks wants to be a carbon-neutral truck company in Europe, Japan, and North America by 2039.

Commercial vehicles, such as semis and even delivery vehicles like the Ford E-Transit, tend to work as EVs, as their shorter, defined routes mean range is less important. The eActros LongHaul improves range, but 310 miles is still short of what a diesel semi can deliver.

Two additional eActros variants and a new Econic intended for municipal buyers are on their way as early as July. The Econic is a smaller commercial truck with special fittings for firefighters, short-haul deliveries, waste disposal, construction sites, and more.

Mercedes-Benz began producing the first eActros late last year at its plant in Worth. The truck rides on Daimler’s eArchitecture and comes with two electric motors. Various battery configurations are available, reaching a range of up to 249 miles with the maximum 420-kWh battery capacity.

Mercedes says it will hold a week-long event in Germany to educate customers on topics ranging from infrastructure to electric models. Customers will be able to drive the eActros 300 “on demanding routes and with realistic payload.”

Mercedes is partnering with Siemens Smart Infrastructure to support its trucks’ charging needs to provide depot charging. Long-distance transport trucks have different charging needs, so Mercedes has partnered with Traton Group and Volvo to address the differences. The joint venture will develop a high-performance charging network for electric long-haul trucks and buses across Europe. Mercedes says the chargers will be available to fleet operators regardless of the brand.

The eActros is impressive, but Mercedes isn’t the first to market with an electric semi. Embattled EV automaker Nikola finally unveiled its production truck and the Freightliner eCascadia will soon be making restaurant food deliveries as part of Sysco Foods’ massive electric fleet order.