Real estate millionaire Manny Khoshbin has quite a few supercars in his garage. He owns no fewer than four Bugattis, and he’s a fan of Rolls-Royce rigs when it comes to daily drivers. But he’s an even bigger fan of the Mercedes-Benz SLR McLaren, which went out of production back in 2009. He likes this German-British hybrid so much that he just bought his sixth example. Talk about being a fanboy, huh?

Manny first showcased his SLR McLarens together back in 2020. That’s when he had five of them, three coupes and two roadsters. With 2,157 units built from 2003 to 2009, the SLR McLaren is not extremely rare, but it was pretty spectacular to see five examples in the same garage. Well, now they are six because Manny took delivery of yet another coupe.

This one’s finished in silver, the most common and popular color for the SLR McLaren. Manny already has two coupes in this color, and I’m pretty sure that at least one has a matching, two-tone interior that combines black and red. It’s pretty obvious that he didn’t get this one for variety. He’s simply an SLR McLaren nut. 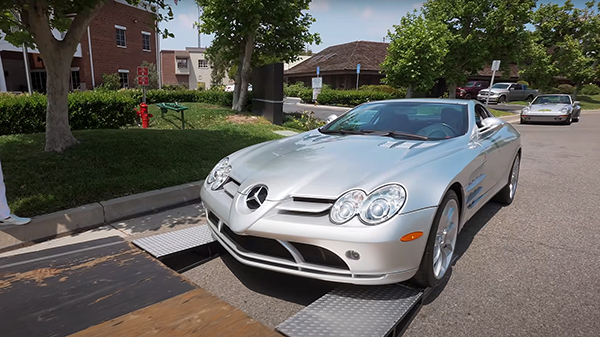 But this car is a tad more special than the other five he owns. Simply because it still has its original cell phone. Not only that, but it still works. Owners tend to keep these phones when they sell the cars, but Manny got lucky and took delivery of this SLR with the phone still mounted on the center console. Pretty cool!

As it happens almost every time he takes delivery of a new (or new to him) car, Manny takes it out for a spin. The SLR McLaren seems to drive like new and the supercharged V8 under the hood still roars like there’s no tomorrow. But the joyride doesn’t last long, and the silver SLR is parked next to the other five Mercedes-McLaren supercars in his garage.

I’m not entirely sure that this is the biggest collection of SLR McLarens out there, but it’s a wonderful sight if you’re a fan of this front-engined beast.

Developed back when Mercedes-Benz owned 40% of the McLaren Group, the SLR was the brand’s most radical vehicle at the time. Conceived as a spiritual successor to the iconic 300 SLR, it arrived with a supercharged, 5.4-liter V8 engine rated at 617 horsepower and 575 pound-feet (780 Nm) of torque.

On top of the regular coupe and roadster versions, Mercedes and McLaren built a few limited-edition specials, like the 722 Edition, 722 GT, and the Stirling Moss. In 2011, two years after the SLR was discontinued, McLaren started a bespoke MSO program for 25 cars.