5 THINGS I LIKE AND DISLIKE ABOUT THE MERCEDES SLR! || Manny Khoshbin

In his latest post, he takes out one of his SLR McLarens for a short drive. It’s only got 1,500 miles and is in near perfect condition. He also talks about five things he likes and dislikes about the SLR. For future McLaren SLR owners, this is the part where you take out your notebooks.

One of the things Khoshbin loves about the SLR is the start button. As petty as it might seem, it’s a one-of-a-kind jet-inspired gear shift with the start button at the top. It is cleverly placed under a flap on the gear-shifter.

He also loves the exhaust placement right underneath the front fenders. The muffler roar hits you right in the face flooring this supercar with the windows down. The third thing he loves about the SLR is the long hood. According to the millionaire, it is quite an experience, especially in the turns. With the long hood, the weight is a bit off-balance, offering a unique driving experience.

He also loves its overall shark look and that the SLR McLaren is a rare car. 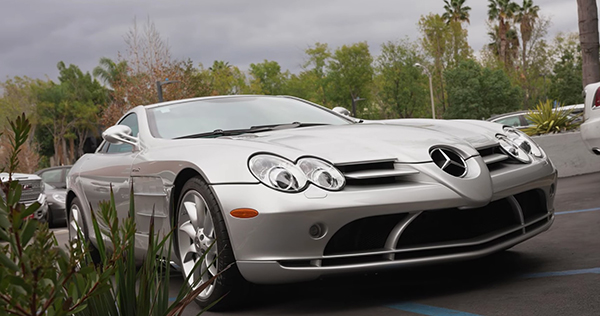 So, what does Khoshbin hate about the SLR? It comes with a high maintenance cost. You shouldn’t get this if you are not rich. The realtor recently dropped $20,000 for an oil change service and minor replacements.

While he appreciates the brakes, he feels they could use an improvement. It’s also not one of those cars that you leave sitting idle in your garage for weeks. The injectors will get clogged and cost you close to $30,000 in repairs.

Due to its design, it can be hectic getting in and out of small spaces. Given its weight and proportions, the SLR McLaren is not the greatest handling car, especially in turns.

All in all, the Mercedes SLR McLaren is a phenomenal vehicle. Two great companies came together and made a masterpiece that is still outstanding 16-years later.