Think of the SL and you’ll probably imagining a portlier, softer version of its hardcore AMG GT sibling. Designed for munching miles rather than apexes, it’s always been a more comfortable proposition – but that feels a million miles away from the car we’ve just driven. We’ve been destroying rear tyres on Mercedes World UK’s petite but challenging handling circuit, and the last few laps have proven this SL is a very different animal to the last.

Lineage
In the Mercedes family-tree, the SL used to be joined by a dotted-line to the AMG GT, but now it’s connected with a solid-one; these cars are immediate family. Why? Because the new SL is developed by AMG, not by Mercedes-Benz. That’s a big deal. An even bigger deal is that Jochen Hermann, AMG’s chief technical officer, describes this new SL as a much more dynamic proposal – a car that can, for the first time, challenge the Porsche 911. Brave words.

So, how has Mercedes-AMG done that?
Simply put, it’s scrapped the old SL and worked on a new chassis that’ll be used by both the SL and later, the next AMG GT. Think of this new SL as the future GT – but in a nicer suit – and you’re pretty much there. The R232-generation SL introduces an advanced multi-material architecture which is stiffer and significantly lighter even though the car is 180kg heavier. Why? Because it comes as standard with all-wheel drive, active anti-roll bars, rear-wheel steering and a fancy five-link front suspension. The SL55 test car’s carbonfibre brakes and 21-inch wheels cost extra.

The Merc’s rounded rear end certainly pays subtle homage to the 911, and the performance is on a similar level. Closing the soft-top is a two-touch affair that’s over and done within 15 seconds at up to 35mph. The fabric stack weighs 21kg less than the folding hardtop. As on the 911, the foremost segment doubles up as flush-fitting cover when open.

The latest SL even gains two token rear seats, like the 911, but they are better suited to carrying a couple of soft bags than transporting toddlers, so the packaging doesn’t make sense to me. The new rear seats automatically make the boot volume shrink to 213 litres with the top down, or 240 with it up – the previous model could swallow a much more useful 485 litres with the roof up. Marketing tells us that more space behind the front seats topped the owners’ wish-list, so Mercedes duly obliged.

But the SL is still about much less technical pleasures: glamour and performance. Down by the sea in the US’ Newport Beach, where roaring Lambos race whirring Teslas between sets of traffic lights on streets paved with gold, the new SL instantly fits in. It looks cool and classy; sexy even, from some angles. At a filling station, people ask questions: is the fabric roof superior to the old retractable hardtop; has the power output gone up?

Driving it
We’ve driven the SL55 in LHD and RHD-flavours, and although the 4.0-litre twin-turbo V8 musters a relatively unexceptional 469bhp (the 577bhp SL63 won’t be available immediately in the UK), its 516lbt ft of torque is plenty to complete the 0-62mph sprint in 3.9sec. The top speed is an equally adequate 183mph. Even so, the adaptive sports exhaust plays Godzilla vs Kong at every blip of the throttle. It’s not the power that’s impressive though, more how it’s delivered. 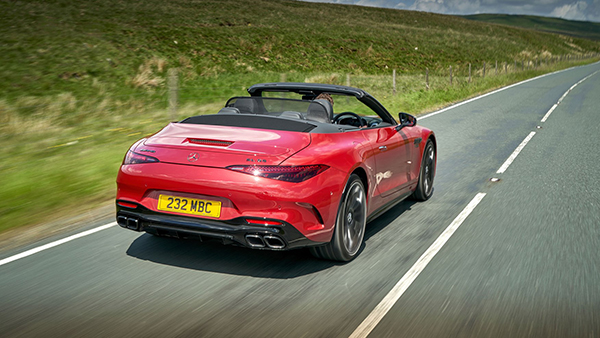 On track…
Although the V8 block in front of us can be traced to, well every V8-powered AMG in the last half a decade, the ancillaries and dressing around this one is something very different. The SL’s V8 is augmented with twin turbochargers that also feature anti-lag. A pair of electric motors spin up the turbines as soon as you think about asking for gas, totally removing the time they usually take to spool up.

F1-derived or not – we’ll leave the marketing to one side here – these electric motors make the SL55 respond incredibly quickly to throttle inputs; this revs like an E63 S V8 on three scoops of pre-workout.

With everything turned up to 11, the SL55 takes off with the urgency of something more like a 911, and the gear shifts come quickly – the SL’s Eye of Sauron cockpit graphics only adding to the drama. Dab of the brakes and it’s time to pitch the car in to a medium-speed right.

Only pitch is the wrong word here, because the SL55’s Active Ride Control suspension (steel springs, adaptive dampers and hydraulically adjustable anti-roll bars) spring to life. The result? The SL doesn’t dive down, fidget or roll like a grand tourer; it’s poised and composed.

At the same time, the fitted as standard rear-wheel steer system whips the back end, forcing the car to rotate. On the way out, stamp the throttle and the 4MATIC traction control delivers an imperial measure of slip angle that’ll look great on drone footage.

On track, the SL has been transformed from a car that could trip you up with its weight and size, to a nimble thing that lets you get away with murder.

On the road
Straight away we lock in my favourite settings: nine-speed transmission in manual and Sport, Dynamic Select in Race, AMG Dynamics in Pro. ESP remains active but is now on the longest available leash. Race warrants the fastest shift speed, the quickest steering response front and rear, the tautest damper setting and the most rapid throttle action.

Most of the blind corners, crests and dips are third-gear stuff, but when second is mandatory, the short gearing and the high rev level can delay the execution for a couple of awkward moments, which can leave you with rather a lot of momentum to be swiftly stashed away. Although there are nine ratios to choose from, the wet take-off clutch and the aggressively spaced three bottom gears clearly favour instant low-end acceleration kicks over mighty midrange punches.

There’s an odd stickiness which ties the steering to the straight-ahead position, feeling like an overly-keen lane-departure system. This robotic double handshake recedes as soon as the turn-in angle increases, and it does not show at all through corners. The wider the bend, the more intriguing becomes the interplay of steering, rear-wheel steering, 4Matic+ and throttle. The combined feedback, the progressively changing torque bias and the deft brake interaction at the limit are reassuringly haptic and precisely measured. 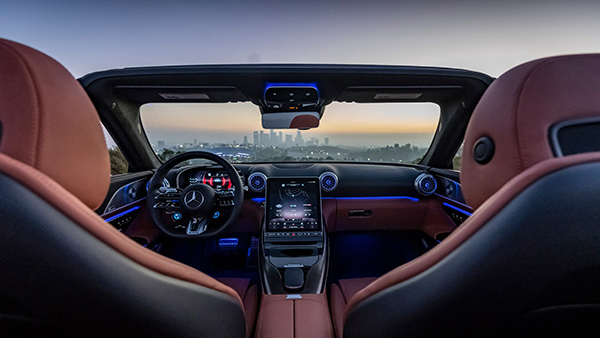 What’s it like using that new interior?
The nicely crafted cockpit certainly looks as digitally advanced as an expensive smartphone, but unless you have a knack for touching, swiping and zooming through life, the software takes a while to reveal its full potential, which includes a highly sophisticated voice-control system. If you use it at night, the cabin ambience is vaguely reminiscent of a Manhattan cigar lounge, glowing in 15 different shades of blue, red and amber.

At any time of day, though, your view into the dashboard is dominated by the centre stack that could be from a Tesla. But that upright XXL tablet-style main monitor looks Walmart generic, rides on an unnecessarily wide and unpadded transmission tunnel, and is crammed with a host of redundant functions most of which can alternatively be accessed via the overloaded ultra-sensitive capacitive four-spoke steering wheel. It’s all a bit much.

Still, in terms of refinement, road noise and suspension thump are the only persistent acoustic intrusions. The soft-top is hush quiet when closed, the wind force is tamed by the excellent drag coefficient of 0.31, and the Burmester sound system plays an unwavering first fiddle even when the V8 feels like boosting the volume of the back-up choir. The cabin also features supportive massage seats, heated door panels and armrests, standard neck warmers and extensive connectivity.

Mercedes-AMG SL: verdict
Don’t be fooled by the name, the new Affalterbach-engineered SL is more aggressive than ever before. Although it’s kept most of its manners on the road, a new chassis packed with tricks such as active ride and rear-wheel steering has given it a new suite of abilities. Now with a juiced-up V8, and a dartier, more compliant front end, the SL is a car you’ll be able to do miles with – but you’ll also want to ‘push on’ in.