It is finally S-Class time again, everybody. The 2021 Mercedes-Benz S-Class just premiered to the world with as much pomp and circumstance as is possible during a global pandemic. Just like every S-Class that has preceded this new model, the new one will serve as the brand’s flagship and house a number of new technologies/innovations never seen in past Mercedes. Over the years, some of these will likely trickle down to lesser Mercedes models, but the 2021 S-Class is unrivaled for the time being. So, let’s dig into what’s new. 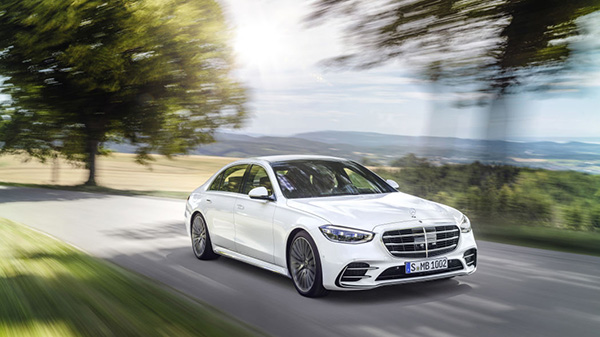 Mercedes isn’t flipping the script with the new S-Class when it comes to exterior design. It still looks like a large, traditional sedan, and it doesn’t stray too far from what the previous S-Class resembles. That said, it’s obviously a new design when you look at the two side-by-side. The new S-Class has a new grille shape, different headlights, revised air intakes and a number of other tiny tweaks that all contribute to making it appear new up front. The most noticeable design change on the sides are new flush-mounted door handles that present themselves when an owner walks up to the car. It’s Mercedes’ first application of electric door handles in this style, so we’re curious to see how they operate in practice versus many other electric door handles already used in other vehicles. 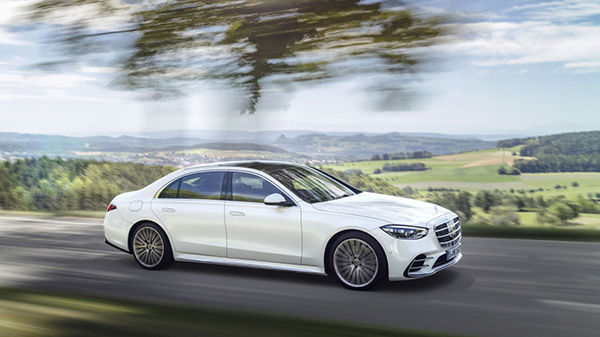 The rear end design is changed up even more than the front. Mercedes switched the orientation of the taillights from vertical to horizontal, allowing the new LEDs to bleed around the edge of the rear bumper. The silver strip of chrome has moved upward to line the edge of the taillights and now stretches from one side of the car to the other. Additionally, the rear marker lights have moved further up in the bumper, giving the subtle, wide exhaust tips more room to breathe. It’s a good looking car as a whole. Mercedes played it safe with such a traditional design, but it fits the S-Class persona perfectly, and it has the potential to be timeless.

Only the sedan is being revealed today, and we only get to learn about two different engine options. The standard 2021 S-Class is the S500 4Matic, and the upgrade is the S580 4Matic. You get Mercedes’ impressive 3.0-liter turbocharged inline-six engine with the S500. It makes 429 horsepower and 384 pound-feet of torque in this guise, aided by Mercedes’ EQ Boost system. Just like every other Mercedes with this powertrain setup, the S-Class runs on a 48-volt electrical architecture that powers a number of important functions. The upgrade S580 also takes advantage of the 48-volt architecture, but it’s powered by a 4.0-liter twin-turbo V8. Output is up to 496 horsepower and 516 pound-feet of torque for this model. Both use Mercedes’ nine-speed automatic transmission for shifting duties. Unfortunately, 0-60 mph times are not yet available. Both models are more powerful than their predecessors, but not by a terribly large amount. We expect the V12 to return in a future Maybach model, and an AMG variant can’t be too far behind either. 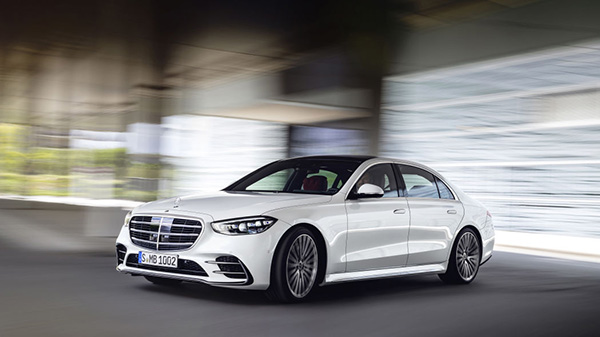 The press release claims that “only floating is better” when it comes to the ride of the new S-Class. An air suspension is standard, but the optional E-Active Body Control suspension is the real catch. It operates just like the system does on the GLE and GLS crossovers, individually regulating the damping and spring forces at each wheel. The body doesn’t squat or pitch with this suspension — Mercedes says the level of adjustability allows the car to be comfortable on poor pavement, but stiff enough to hustle like a sports car if you so choose. We’ve written about the four-wheel steering system that Mercedes has applied to the new S-Class already, but this will also make it more agile on a twisty road in addition to cutting down the turning radius to compact car size. 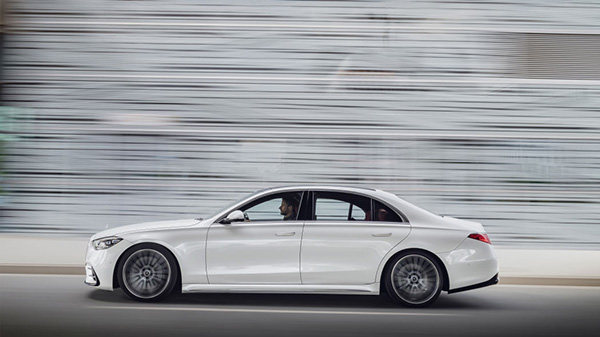 Now, onto the most important part of an S-Class: the interior. Mercedes totally redesigned it to look like a lounge, and a luxurious lounge at that. The number of physical buttons has decreased dramatically. A new, massive 12.8-inch screen dominates the whole central area — it runs a new and improved version of MBUX that’s more powerful than ever before. A row of buttons lines the bottom of the screen, but Mercedes has decided it’s time to put the HVAC controls into the touchscreen. Subtle, but classy horizontal air vents are visible in the center, while long, vertical vents can be seen on the outer edges of the dash. 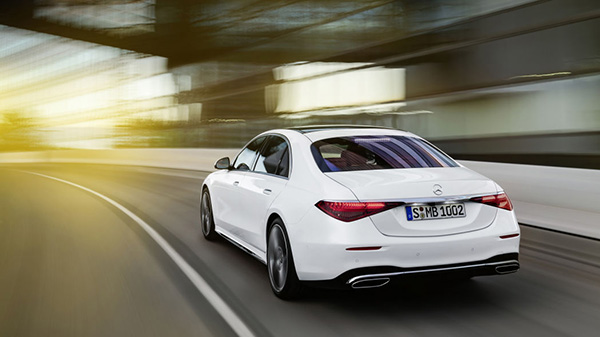 Mercedes is quite proud of its new climate control system in the new S-Class. It’ll warm up on winter days much quicker than before thanks to a booster heater that’s powered off the car’s 48-volt system. It warms up the interior rapidly, and most important, allows hot air to be felt right when you start the car. There’s a new fragrance system in this S-Class too, bringing with it “Bamboo Mood” and “Cotton Mood” smells. The previous smells were questionable, so we’re eager to see if Mercedes has improved this weird feature. 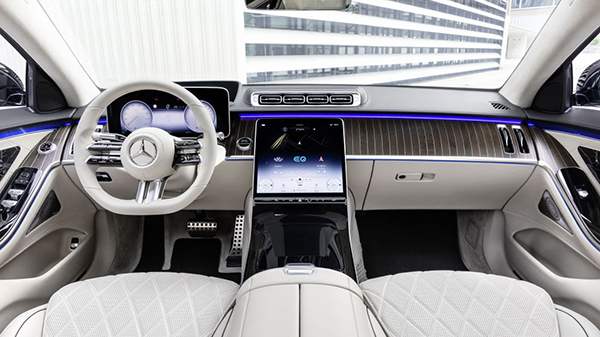 Moving back to the screens, the digital instrument cluster is another revolutionary piece of tech for Mercedes. It features a 3-D effect that makes the display pop out at the driver without the need for 3-D glasses. The effect can be turned off, but this is a first in any new car. For even greater weirdness, the head-up display can now project augmented reality content onto the road ahead of you. For example, the direction to “turn left” will appear as an arrow 32 feet ahead of you on the road where you should be turning. Sound a bit overkill? Sure, but it sounds pretty freakin’ cool also. 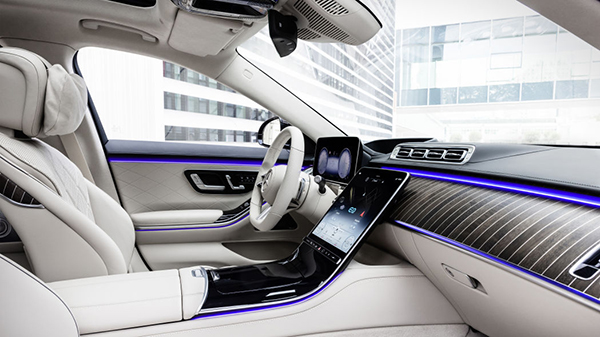 The back seat can have up to three screens when fully decked out. Each rear passenger (in four-seat configuration) gets an 11.6-inch touchscreen plastered to the back of the front headrests that allow them to control a number of vehicle controls. Additionally, a seven-inch tablet in the center can do the same. “Hey Mercedes” functionality is even added for backseat passengers on the 2021 car. Mercedes says its (sometimes overbearing) voice assistant is improved for this model. You can use it without the activation phrase for some tasks, give it consecutive instructions without breaking and even have a more normal conversation with it. Mercedes says it’ll give you answers to more general questions, and even provide animal noises. Neat. 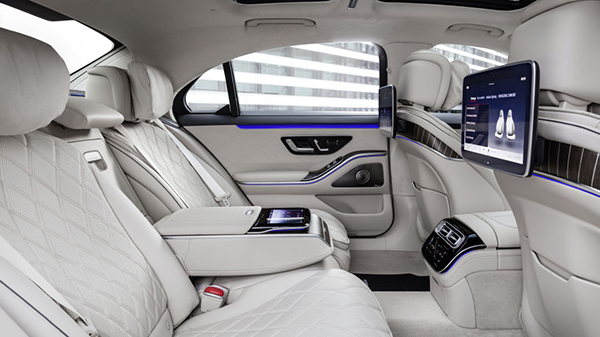 More luxury than before is obviously on the table, too. More seat motors and fans (for ventilation) are used than ever before, and Mercedes’ Energizing seat kinetics program is available for the first time in an S-Class, too. An array of massage programs can be selected, and the backseat is a splendid place to spend time once again. New for this year is a heatable cushion on the headrest on the outer rear seats that keep the occupant’s head and neck warm. There’s a teensy bit more legroom than the previous S-Class, and you can recline a hair more, too. Backseat passengers are even more protected via the new rear seat frontal airbag we detailed previously. 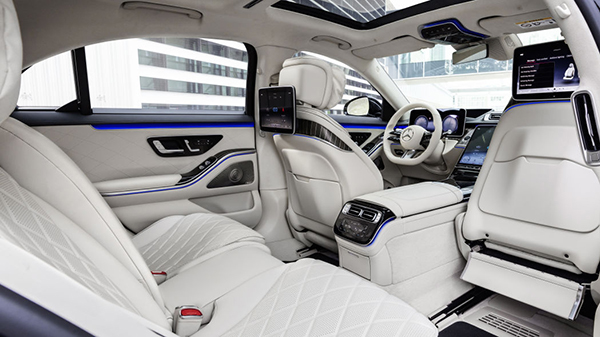 For those audiophiles, Mercedes has you covered with a new (and optional) Burmester “4-D” surround sound system. It uses 30 speakers and eight resonators to produce the sound experience. What are the resonators for, you ask. Mercedes puts two in the back of each seat, and they reproduce the “sound resonance” for even more “tangible” listening. The intensity of the resonators can be individually adjusted for each seat, in case your passengers aren’t feeling up to experiencing sound in the fourth dimension. Speakers near the driver’s ear can improve the sound experience even further, making it so only the driver can hear infotainment sounds or navigation directions. Mercedes says it’s managed to make the cabin even quieter and better isolated than before, so you can waft along in silence or be completely immersed in music 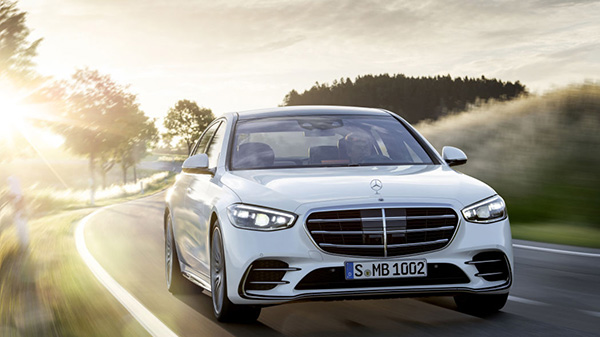 The last bit we’ll touch on for the new S-Class is its driver assistance systems. It’s getting closer to being able to drive itself, but we’re not there yet. Mercedes is using the same touch-sensitive steering wheel we saw on the E-Class in the new S-Class. There’s also a new animated display that allows you to see a 3-D depiction of what’s going on around you in real time. This is here so drivers can get an idea of what the car is seeing with its numerous radar sensors and cameras. 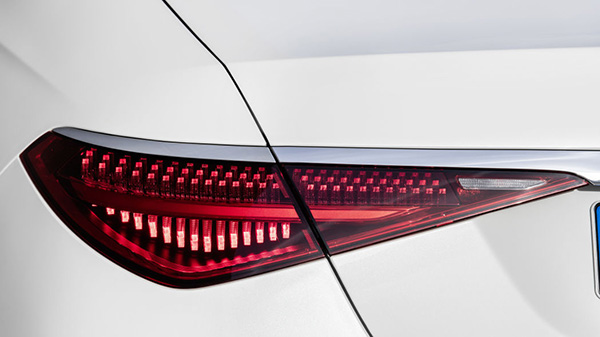 Mercedes says the lane-centering works much better than before, even on winding country roads. It’s also able to track along when there’s no center line and just follow the road edge instead. This Active Steering Assist works at speeds up to 130 mph. The adaptive cruise control is now able to provide an emergency stopping maneuver from speeds up to 80 mph (was 35 mph), and it also features predictive speed regulation ahead of speed limit changes. Ambient lighting has worked its way into the driver assistance system. You can see how pivotal the lighting is to the interior design in all the photos, but it’ll light up in warning colors when you stray too close to a line. Mercedes has greatly improved the ambient lights in the new S-Class, too, greatly increasing the number and quality of the LEDs.

And that’s where we’ll leave you for now. Mercedes says the new S-Class will be available in the U.S. during the first half of 2021. Pricing isn’t set yet, but it should come in around $100,000 for the base sedan.