The interior design of the all-new Mercedes-Benz S-Class has been teased ahead of the car’s full reveal early in September. Judging by these new teasers, the seventh-generation of the brand’s flagship saloon looks set to mark a radical departure from its predecessor in terms of both design and tech. 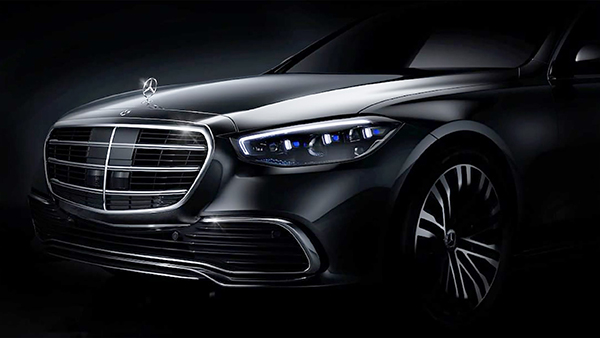 Inspiration for the new cabin has been taken from upmarket home interior design and the world of luxury yachts – steps which have contributed to what Mercedes calls a “lounge-type ambience”. While few lounges can claim to boast five separate digital screens, the layout and materials appear to take the new model in a more minimalist direction than previous S-Class generations.

The most eye-catching of those screens is the new central infotainment display. At the top, the huge portrait-oriented touch-sensitive system sits proud of a dashboard which gently slopes away. However, its base follows a continuous sweep into the centre console.

The boating influences extend beyond the flowing dashboard and into some of the materials themselves. The wood trim which covers the dash and between the individual rear seats of the car teased here, features an open-pore finish inlaid with strips of aluminum. Elsewhere, there’s more conventional automotive cues, such as quilted, perforated leather upholstery on the seats.

The bullet-style vents of the old car have gone; in their place are a bank of four slim horizontal vents at the top of the dashboard, and a pair of narrow vertical units to each side.

The new S-Class will use its tech to make the driving experience as comfortable as possible. Mercedes’ “Energising coach” can alter various systems within the car – lighting, seat massaging, fragrances and ventilation, among others – based on both car-based (driving and trip information) and human-based (driver fatigue and stress levels). It will even integrate with a driver’s compatible fitness bracelet or smartphone to tailor these functions as accurately as possible. Many of these settings can be shared between occupants, or set individually from one another.

Tell the S-Class your height, and it can adjust the seat, steering wheel and mirrors accordingly to the ideal driving position – though specific adjustments can still be made by the driver to get things spot on.

Elsewhere, the S-Class will make the most of its extensive mood lighting to present information as well as a specific ambience. Tied in with driver assist systems, the lighting is able to warn the driver of a vehicle in their blind spot by glowing red, for example.

Mercedes believes that the new S-Class is the most practical model it has ever produced, too. Though no official measurements have been confirmed, the new model is said to be more spacious inside in almost every dimension relative to the sixth-generation model. 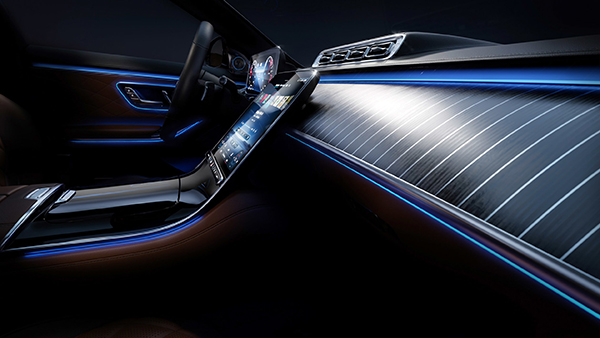 New Mercedes-Benz S-Class: comfort and technology
A completely new suspension system called E-Active Body Control will be introduced on the S-Class. It features a fresh set of adaptive dampers, five multi-core processors, a camera and 20 sensors scattered around the car, all of which monitor the road surface and driving style 1,000 times per second to make adjustments to the suspension accordingly.

Mercedes says the system will be able to instantly respond to the road conditions. For example, in the system’s ‘Curve’ driving mode, the S-Class’s suspension will actively lean the car into bends, like a motorcycle, in an effort to improve the ride.

The S-Class’s various sensors can recognise an imminent side impact. If it detects a collision is coming, the car’s suspension lifts by up to eight centimetres, to direct impact forces towards the stronger underside of the vehicle and away from occupants.

To accompany this side-impact system, the S-Class also gets a new central airbag that deploys between the front passengers in the event of a side collision, to reduce the risk of heads clashing together.

There’s also a new rear-wheel steering system, which Mercedes says has improved the S-Class’s manoeuvrability by reducing its turning circle by two metres when compared with the outgoing model. The system will be available in a choice of two configurations – one with a rear steering angle of up to 10 degrees and one with up to 4.5 degrees.

The newcomer will also receive the firm’s latest driver-assistance technology, including active blind-spot monitoring, active steering assist and an improved active park-assist system. The latter features 12 new ultrasonic sensors as well as an emergency braking function. According to Mercedes’ engineers, it is also easier to activate via the car’s all-new infotainment system.

Elsewhere, new LED matrix headlights feature 1.3 million moving micro mirrors that can place light precisely and replace the augmented-reality head-up display by projecting images and directions directly onto the view of the road ahead.

As for engines, three have been confirmed. The 3.0-litre diesel will develop 281bhp, while the entry-level six-cylinder petrol makes 362bhp. A new plug-in hybrid is promised too, with an all-new battery and motor system. Details are slim, but 500bhp and more than 62 miles of electric range are promised. As ever, Mercedes will offer the S-Class in standard and long-wheelbase formats. 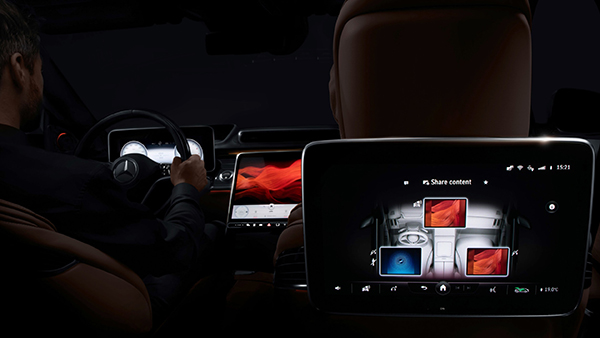 New Mercedes-Benz S-Class: design and platform
Our previously spied, scantily clad S-Class development mules offer a good indication of how the finished saloon will look. Mercedes will take an evolutionary approach to the car’s styling, retaining its basic silhouette but borrowing some of the design cues which the company has already implemented on its most recent models.

For example, the next-generation S-Class will receive a pair redesigned LED headlamps, which have a similar shape to those found on the latest E-Class saloon and GLC crossover. The car’s broader, new-look radiator grille and bumper intakes also mimic the shape of the flagship GLS SUV’s.

We’re yet to hear anything official on the S-Class’s powertrain range, but we expect the line-up will comprise entirely of electrified options, with a mix of six-cylinder diesel and petrol options – and a choice of either 48-volt or plug-in hybrid assistance. Higher-powered V8 and V12 engines are also possible.

An all-electric stablemate for the S-Class is also in the pipeline. The new EQS saloon will enter production at the end of the next year and, like other Mercedes EQ models, it will be an all-electric interpretation of the combustion engined car.

The two models will share some similarities in design and technology, but the electric variant will be purposefully marketed as a flagship model for the EQ line-up. Mercedes says it’ll be capable of covering up to 310 miles on single charge. 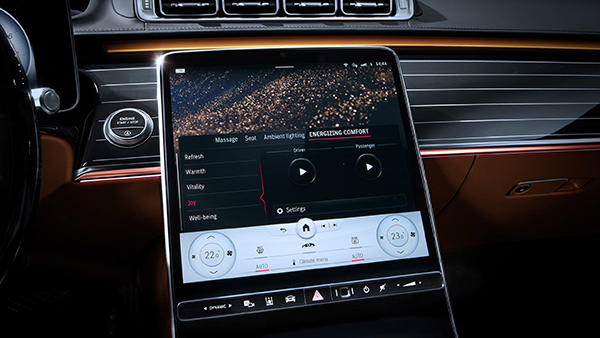 New Mercedes-Benz S-Class: infotainment technology
The luxury limousine will be the first model in the company’s line-up to feature the brand’s second-generation MBUX infotainment system, which can operate on up to five separate screens scattered around the saloon’s interior.

The S-Class’s main display will be a 12.8-inch portrait screen, positioned on the dashboard and flowing into the centre console. It’s available with OLED technology and acts as the hub for the car’s many functions and controls, allowing Mercedes to remove 27 physical controls from the S-Class’s dashboard.

Buyers get a new digital instrument binnacle, too, which features three-dimensional effect graphics and selectable ambiences. There’s also a new augmented reality head-up display, which projects navigation instructions onto the windscreen, making them appear as though they’re ten metres in front of the vehicle.

In the rear, two entertainment displays are fitted into the backrests of the front seats, while a removable table display is optional. Mercedes says that rear seat passengers have access to the exact same information and features as those in the front, and that information can be shared seamlessly across every display in the car.

Mercedes’s latest MBUX system also adds a new Interior Assist function, which uses cameras in the car’s overhead panel to interpret the head, hand and body movements of those on board and automatically enable corresponding vehicle functions.

For example, if the driver reaches over to the passenger seat to grab something at night, the light above the passenger seat will automatically switch on. Looking at a side mirror also allows it to be adjusted without the need to operate a physical switch.

Interior Assist introduces a few extra safety features, too, such as detecting if a child seat is not correctly fastened. The system also works with the car’s blind spot assist, to monitor the vehicle’s surroundings when a passenger leaves the car. If an occupant attempts to exit the car as another vehicle approaches, the ambient lighting will pulse red as a warning.

Finally, the second-generation MBUX system debuts a new profile-based personalisation system, with space for up to seven users. Each profile stores a preferred seating position, climate setting, radio station and ambient lighting setting for every seat in the vehicle.

The software is linked to the Mercedes Me Smartphone app – meaning a quick scan of a QR code is all that’s required for the S-Class to download the personalised settings. Mercedes has also confirmed that this system will be added to all of its future vehicles that adopt the improved MBUX infotainment system. 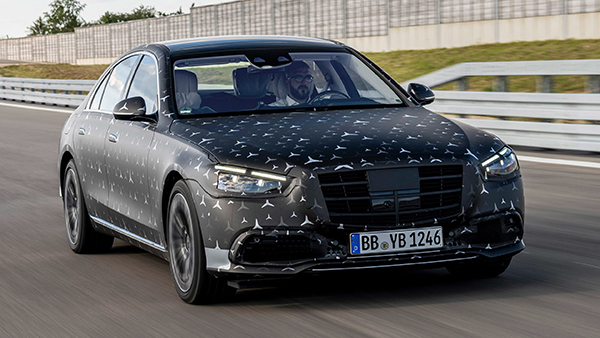