Sound on! I have taken a new Mercedes-Benz CLE Coupe spy video during some laps on the Nürburgring. The CLE Coupe is set to replace the C- and E-Class Coupe and is expected to be launched in mid 2023.

Sedan sales may be on the decline, but the situation is even worse for sporty two-door cars. As a result, most automakers have either scaled back the number of coupes and convertibles they offer or dropped the body styles altogether.

Mercedes-Benz is one automaker scaling things back. For example, it’s preparing a single nameplate to replace the current C-Class and E-Class coupe and convertible models.

The new nameplate is expected to be called the CLE-Class, and we’ve previously spotted it testing in convertible form. Now fresh prototypes for the coupe body style have been spotted. Both should arrive on the market next year, likely as 2024 models. 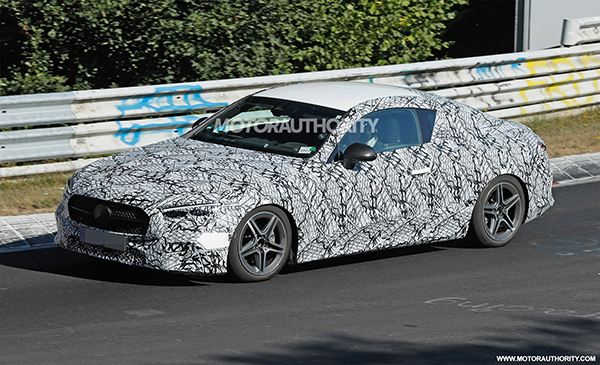 The car is closely related to the redesigned 2022 C-Class, though it looks to feature a more muscular stance and slightly slimmer headlights. This should result in a sportier appearance overall.

Expect the interior to be similar in design to the latest C-Class, meaning buyers should be treated to a 12.3-inch digital instrument cluster and a 11.9-inch (with portrait-style layout) infotainment screen as standard.

Powertrains should also match those of the C-Class. The C-Class is available in the U.S. in C300 guise only at present. Powering the C300 is a 2.0-liter turbo-4 that makes 255 hp and 295 lb-ft of torque; it’s teamed with a 48-volt mild-hybrid system that adds another 20 hp and 148 lb-ft for short blasts. More options are coming from AMG, including a recently revealed C 43 with more than 400 hp and a soon-to-be-revealed C 63 that will deliver in excess of 600 hp through a hybridized turbo-4. Both AMG options should be available for the CLE-Class. Stay tuned.