Convertibles don’t sell in massive numbers like they used to, which is why Mercedes-Benz will consolidate its once-massive drop-top lineup. At one point, Mercedes offered convertible variants of the C-Class, E-Class, and S-Class, plus the AMG GT Roadster and the convertible-only SLC and SL. We already know that the all-new Mercedes-AMG SL will effectively replace both the GT Roadster and S-Class Convertible, and for some time, reports have suggested that the C-Class and E-Class Cabriolets will merge into one model called the CLE-Class. 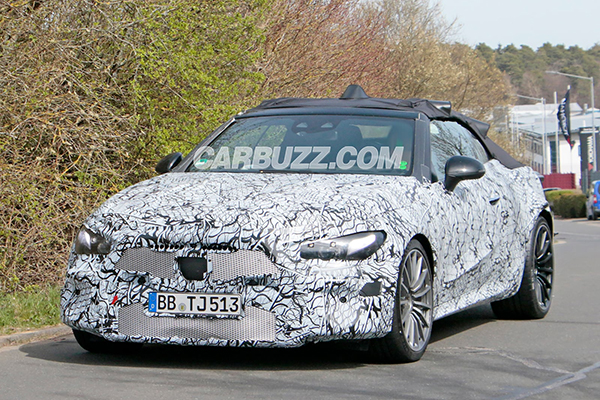 We’ve previously spotted the entry-level CLE Cabriolet testing in the snow earlier this year using the same hybridized 2.0-liter four-cylinder engine from the latest C-Class. This engine should match the base C’s respectable output of 255 horsepower and 295 lb-ft of torque. But Mercedes won’t stop there and will introduce an AMG variant or two.

This camouflaged prototype was captured outside Mercedes-AMG’s Nurburgring facility, where it is undergoing early development testing. The test mule still wears plenty of fake body panels and non-production equipment, like the exhaust tips, which may at first glance give the impression this is an ordinary model. These phony elements are meant to distract us from noticing that this particular car looks different than the last CLE we spotted. This prototype clearly has a wider track, larger brakes, and likely some other performance goodies Mercedes doesn’t want us to notice. 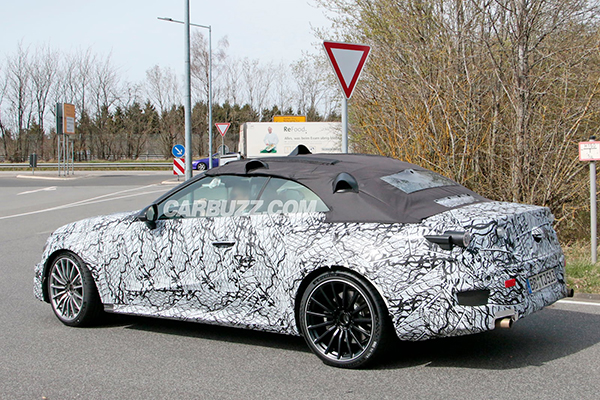 Since the CLE will likely share powertrains with the C-Class, we expect the CLE 63 to use the same rumored hybrid setup as the upcoming C63. The AMG CLE should pair a 2.0-liter turbocharged four-cylinder engine (the same unit from the CLA 45 S) with a potent electric motor. Mercedes-AMG has previously confirmed that more than 442 horsepower was possible from the gas engine alone, while the electric motor would contribute 201 hp. Doing the math, that means that more than 600 hp is easily attainable, although we suspect this will be detuned for the CLE to around 550 hp and nearly 600 lb-ft of torque.

Curiously, this prototype doesn’t have any hybrid warning stickers, and it’s missing an ‘E’ suffix on the number plate, which would indicate a plug-in hybrid setup. This casts doubts on whether this is genuinely an AMG model, although this could perhaps be an early chassis prototype sans uber-powertrain.