She forged the road ahead, to pave it for us all. This is the story of Bertha Benz, The First Driver.

Set your time machine to August 1888. It’s hot, humid, and you’re in a small German town enjoying a refreshing pint of hefeweizen when an unusual noise breaks the silence. It almost sounds like a train, but it can’t be — there are no tracks for a train to travel on. The source of the cacophony appears halfway through your next sip: It’s carriage-like, yet there’s no horse pulling it and it’s eerily moving under its own power.

Back to the present (you can bring the hefeweizen with you). It’s hot, humid, and you’re relaxing in a small German town. Suddenly you hear a car coming — who cares? Unless it’s something really special, like a Glas 1300 GT, odds are you wouldn’t pay attention to it. However, in 1888 you would have witnessed what’s widely recognized as the first car take its first road trip with its inventor’s wife at the … well, not really at the wheel, because the steering wheel hadn’t been invented yet, but at the little metal tiller used to turn the lone, bicycle-like front wheel. 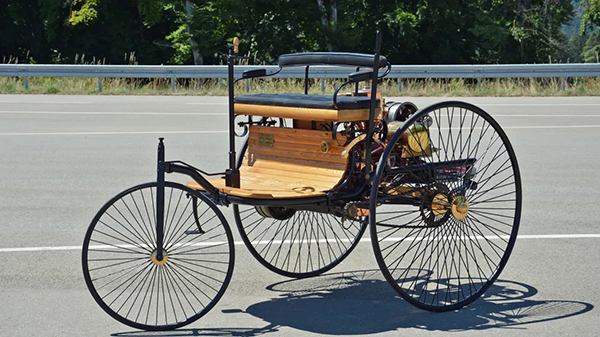 Carl Benz built the Patent-Motorwagen in 1885 and received a patent for his invention, which he described as a “vehicle with gas engine operation,” on January 29 of the following year. He essentially invented the car. Sure, someone else might have designed a vehicle with gas engine operation in 1882, and it may have worked wonderfully, but there’s no trace of it. Benz applied for and received the patent for the car, and his wife, Bertha, embarked on the first road trip — a 112-mile trek from Mannheim to Pforzheim and back — with her kids two years after that.

Now it’s my turn to take the Patent-Motorwagen for a spin over 130 years later at the Mercedes-Benz test track in Immendingen, Germany.