The EQS is Mercedes-Benz’s bid to create an electric equivalent to its flagship S-class: the ultimate, zero emission, luxury limousine if you will. We’ve driven the UK’s launch model, the EQS 450+, a rear-wheel drive, 5.2m-long behemoth with a battery pack as big as Sizewell B, a touchscreen twinned with an IMAX cinema and sufficient Artificial Intelligence to apply for Mensa. Read on to find out if it’s as good as it sounds. 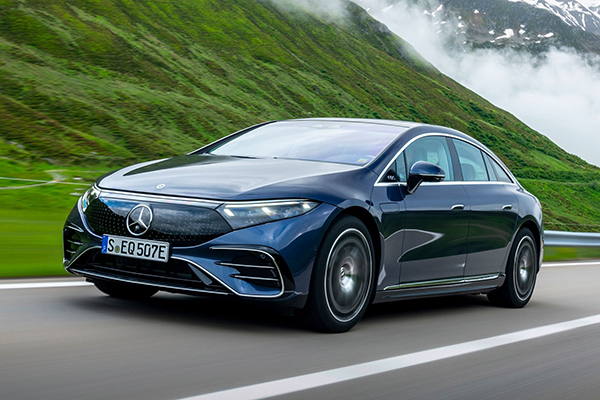 A hatchback, but no A-class
It’s an unusual-looking car, the EQS five-door hatch. There’s something slightly pyramidal about it, with its stubby nose and rear sharply rising into the domed, elongated passenger cell in between. But the flush front end and teardrop shape are hardly bricklike – with a 0.20 drag coefficient, Merc claims it’s the world’s most aerodynamic car. Maybe less pyramid, more melted Toblerone chunk.

The doors are equally unusual. Forget pop-out door handles, the EQS has pop-out doors. Approach and it swings open, and as you settle into the driver’s seat with its cotton-wool comfy head restraint, step on the brake and it closes again. No wonder this luxobarge claims up to 350 sensors, powering myriad features from congested highway autopilot to continuously calculating where to stop for energy.

Next you have to come to terms with… Hyperscreen (oh, to have been a fly on the wall in that naming meeting)! Fundamentally, this £8000 optional feature is a bank of conjoined screens almost 1.5 metres wide, with one for the passenger to watch movies or adjust car settings, a vast central touchscreen and the driver’s configurable digital binnacle. There’s a small control panel for stereo volume, dynamic mode and hazard warning in the centre console, but switches are at a premium and the old Merc touchpad or clickwheel are nowhere to be seen. 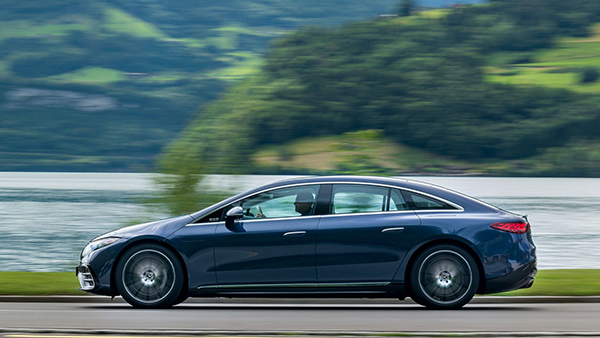 Gadget overload! Let’s get driving
I drove Mercedes’ first new-generation electric car, the EQC SUV, for nine months and the difference is remarkable. There’s now a choice of powertrain soundtracks – we opt for Silver Waves – and many lighting variations from the LED strip atop the dash. Accelerate hard and the lights glow red, accompanied by an unexpectedly bassy, burbling synthesised noise which makes a decent fist of echoing the ebb and flow of e-motor performance. I found it all great fun, but I accept that plenty of people will silence the lot.

Acceleration is Golf GTI brisk, so miles off the scenery-jumping capability of more outrageous Teslas. The EQS 450+ has a single motor on the rear axle, producing 325bhp –sufficient for a 0-62mph sprint in 6.2secs.

And you can carry a fair bit of speed into roundabouts and corners: the 450+ has prodigious sticking power, even with the Goodyear Eagle F1s gently squealing a little harmony with the Silver Waves soundtrack, under near 2.5-tonnes of car.

After so many high-rolling electric crossovers, it’s great to feel the dynamic benefit of a lower centre of gravity, with progressive, nicely controlled roll – it’s a world apart from the EQC in this respect. Stringing together a set of country twisties, I reeled in a BMW X7 like Lewis Hamilton chasing down a podium spot. 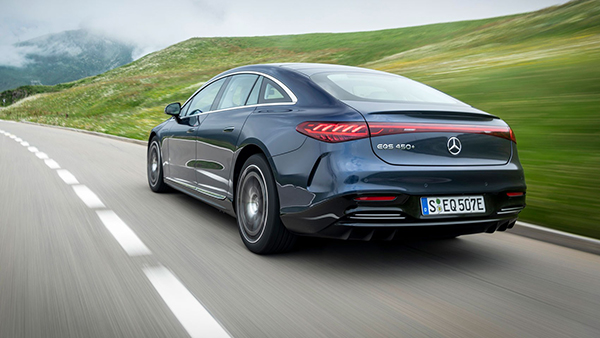 Rides like a true Mercedes-Benz
The EQS is a big car, but it’s more agile than you expect thanks to rear-wheel steering. The standard car gets 4.5˚ of turn to boost stability at high speeds or corner at lower speeds, but our test car had the optional 10˚ pivot (which will be available as an over-the-air update, demonstrating how the EQS can roll out optional features).

You certainly notice it sharpen up the turning circle, making the genteel, lightweight steering feel faster than it is.

But the overwhelming EQS sensation is its delicious, air-sprung comfort. The long travel suspension eases over speed bumps, and potholes cause barely a ripple around town. Using Sport mode brings a little underlying tautness, but it still copes with high-frequency undulations with aplomb at A-road speeds.

All that on 21-inch diameter wheels – the same size as my old EQC’s. But that crashed through potholes and rolled around like a fouled footballer: the EQS is definitely in the ride comfort Premier League. It’s blissfully quiet at urban speeds, and cruises in a bubble of discreet air and low tyre grumble on the motorway.

The one dynamic drawback is occasionally squidgy, inconsistent brake pedal feel. Drive a bit less hurriedly than us and you won’t need them: tap the steering wheel paddle to engage ‘increased’ regenerative braking, and the car will automatically slow sharply when you lift. Or opt for ‘normal’ levels or no regeneration if that feels more natural.

How far does she go, mister?
Mercedes says the EQS packs its most energy-dense batteries to date, but the salient point is just how many: the stack’s capacity is an immense 107.8kWh. That’s almost 30Kwh bigger than the EQC’s.

That endows the EQS 450+ with a range of 484 miles on the WLTP test cycle. And on our brief test drive (in admittedly benign summer conditions), the trip computer recorded a consumption of 21.9kWh per 100km, not far off the official drain figure. On our mixed driving route with plenty of brisk acceleration runs, that’s about 3 miles per kWh – slightly better than the EQC managed on hypermiling runs.

The EQS’s standard AC charger can handle a 22kW wallbox (requiring triple-phase electricity supply) – it’ll take the equivalent of two nights’ sleep to recharge on a 7.4kW charger. Out and about, the EQS tops out with a 200kW DC charger: expect it to take 30 minutes to go from 10 per cent battery charge to full. 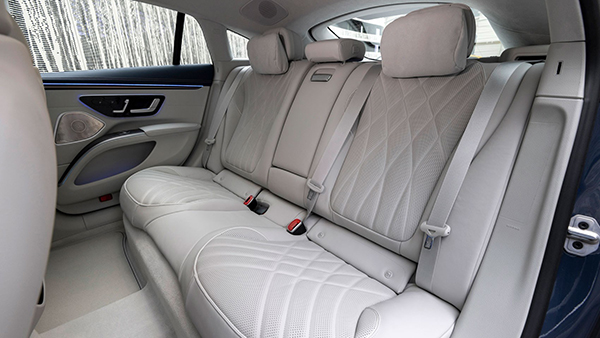 Any other novel features?
There are lots of novel features, enough for a book rather than a quick first drive review. The flap behind the front wheel gives access to top up fluids – the bonnet doesn’t open.

As with the S-class, Mercedes’ latest head-up display projects animated navigation arrows onto the road ahead, which dance along the intersection to show where to turn. And there are barmy Energizing Comfort moods: opt for Sea Breeze to hear whale music and watch waves crash across the Hyperscreen, while the seat massages your butt and air vents blow cold air.

The car’s operations are started with a pin code, and it’s linked to the Mercedes Me app on your smartphone. Store your preferences in a profile, even down to your height which helps the EQS set up your seating position, and these settings can be taken from Merc to Merc via the app. And no fiddling around with hidden switches for lumbar support: trace a line on a graphical representation of the seat to select how much bolstering you require.

You can establish different charging routines for different locations (such as at home or the office), and prime the cable to unlock at the end so other users can take over the juice. The air filtration system compares external pollution with the hermetically sealed, prodigiously spacious cabin: you’ll blanche as it tots up a decrepit van’s diesel particulates.

Finally and more prosaically, the Porsche Panamera-style hatchback boot swallows 610 litres of cargo, or 1770 with the rear seats folded.

Verdict
Truth be told, Mercedes-Benz electric cars to date have fallen somewhere in the middle of the Best or Nothing spectrum depicted in its marketing. But with the EQS – uncoincidentally on the company’s first bespoke EV architecture, rather than a converted combustion platform as with the EQC – the Merc EV has finally achieved take-off.

The EQS is decent to drive, beautiful to ride in, and its electronic features range from the fun to the smart to the sublime. The S-class is the first choice for presidents and plutocrats. The EQS has what it takes to become the default option for environmentally-leaning businessfolk the world over.