Mercedes-Benz is taking two starkly different approaches to electrifying its lineup. Some of its EQ-branded electric cars are standalone models without a gasoline-burning counterpart, like the EQS and the EQE. They’re positioned as electric alternatives to the S-Class and the E-Class, respectively, and they look nothing like their gasoline-powered alter-egos. Others are electric variants of the gas-powered cars themselves; the new GLB-based Mercedes-Benz EQB falls into this category, with the EQC sold in some global markets being another. Only a handful of styling cues inside and out, and of course the powertrain, differentiate these EVs from their gasoline-burning counterparts.

Both approaches are intriguing because they create completely different types of cars. Standalone EVs tend to be more futuristic, both in terms of design and itechnology. EVs based on existing models generally look and feel familiar, which can reassure buyers on the fence about buying an electric car (or truck, in the case of the Ford F-150 Lightning). We’ve praised the GLB, calling it “a force to be reckoned with in a growing luxury segment.” Now we’ve traveled to southern Germany to find out how it behaves as an EV.

Although the EQB’s body is identical to the GLB’s, designers shifted the front-end design in a more futuristic direction, above left, to bring the crossover in line with other members of the EQ range. The headlights are thinner and swept-back instead of rectangular, and they flank a black piece of trim that replaces the grille. The new look is markedly less outdoorsy but it works well. From the side, the distinctive beltline kink above the rear wheel arch remains, while the back end gains the light bar that defines other EQs.

These changes aren’t drastic, but they help the EQB achieve a drag coefficient of 0.28, down from 0.32 for the GLB. Felix Rothfelder, the global product manager for the EQB and EQE, told me that the EQB is the first car that the firm designed entirely digitally. The design was locked in and key parameters were tested using only software before the first model was built and checked in real-world conditions.

Pay no attention to the pink-ish seat color in our photos; it’s available on European-spec cars, like the EQB 300 that I drove in Germany, but it will not be offered in the United States. That means EQB-specific bits inside are largely limited to illuminated door sill plates and a tweaked version of the MBUX infotainment system whose navigation software factors in topography, traffic conditions, and charging stops when planning a route. It’s a clever piece of technology that takes some of the guesswork out of driving an EV on a road trip. It’s displayed on the same 10.25-inch touchscreen that you find in the GLB.

Going electric doesn’t sacrifice cabin space, which is one of the GLB’s strongest assets. The EQB can comfortably carry four adults and their gear in its five-seater configuration, even if the rear passengers are on the taller side. Mercedes-Benz offers third-row seats at an extra cost but they’re an odd trade-off: They give you the ability to carry two small passengers while reducing the trunk’s usable volume to that of a Lamborghini Aventador’s. Speaking of trunk space, don’t look for a frunk. Pop the hood and you’ll see part of the EQB’s electric guts. Rothfelder told me adding a frunk would have been possible, but engineers decided not to because the trunk is big enough as-is. He’s not wrong: The five-passenger model measures about 27 cubic feet and provides a stunning amount of room for stuff. 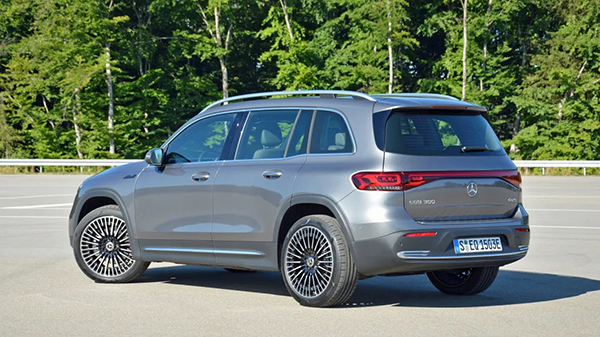 Buyers have two EQB flavors called EQB 300 and EQB 350, respectively, to choose from. Both are fitted with a pair of electric motors (one per axle) for through-the-road all-wheel-drive and a lithium-ion battery pack with 70.5 kilowatt-hours of usable energy. The biggest difference between the two models is the drivetrain’s output. It’s rated at 225 horsepower and 288 pound-feet of torque in the 300, and 288 hp and 384 lb-ft in the 350. Mercedes-Benz hasn’t released range information yet, but it notes that both models are built on a 400-volt electrical architecture and max out at 100 kilowatts of charging capacity.

Frankly, these figures underwhelm. For roughly the same amount of money, the Volvo XC40 Recharge as well as top versions of the Kia EV6 and Hyundai Ioniq 5, plus the Ford Mustang Mach-E Extended Range AWD, are far more powerful and shave multiple seconds off the EQB 300’s pokey 8.0-second 0-100 km/h time. The 350’s relatively modest bump won’t close the gap much. EPA range estimates aren’t yet available, but with a European WLTP range estimate of 418 kilometers (260 miles) being similar to the XC40’s, it seems logical that both versions of the EQB will be in the same low-200s range as the Volvo here in the United States. Finally, that 100-kW charge capacity is considerably slower than all of the above, plus Mercedes’ own EQE and EQS.

There’s some extra context to be found here as well, because one of the EQB’s most direct rivals is inevitably the GLB giving it the side-eye from across the showroom floor. Shop for a GLB and you’ll also have two variants to choose from. Called GLB 250, the entry-level model comes with a turbocharged, 2.0-liter four-cylinder engine rated at 221 horsepower and 258 pound-feet of torque. It spins the front wheels via an eight-speed automatic transmission, and the 4Matic all-wheel-drive system is offered at an extra cost. The second and final rung on the ladder is the all-wheel-drive-only GLB 35 AMG, which receives an “AMG-enhanced” evolution of the 250’s turbo-four tuned to provide 302 horsepower and 295 pound-feet of torque.

Relatively small, the GLB lends itself well to electrification. Like almost all battery-powered cars, the EQB is zippy off the line and it delivers smooth, linear acceleration in near silence. One issue that carmakers often run into when electrifying a vehicle developed with an internal combustion engine is noise: rattles, squeaks, and other annoyances invite themselves into the cabin once they’re no longer muted by the engine. That’s not the case with the EQB, and this feat is surprising considering that Mercedes-Benz did not make any major changes to quell noise, vibration and harshness. Rothfelder told me that part of the smoothness was achieved by adding damping mounts to each motor and to their housing.

My time behind the wheel of the EQB 300 was limited to the roads that zig-zag through the postcard-like German countryside. In these conditions, the EQB’s four driving modes (Comfort, Sport, Eco and Individual) perform exactly how you expect. Comfort is the default profile, and the one that’s best-suited to day-to-day driving. Sport makes the EQB markedly livelier: It feels quicker, even with the leisurely 0-60 time, and the pedal response is sharper. On the other end of the spectrum, Eco neuters the powertrain (notably by flattening the throttle response) to maximize driving range and save energy. Individual lets the driver configure an à la carte mode. 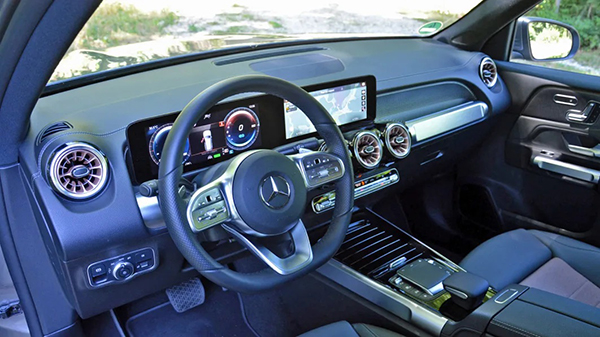 Stuffing the battery pack – the heaviest part of the drivetrain by a wide margin – beneath the passenger compartment lowers the center of gravity, which in turn reduces body roll, but the powertrain is front-biased and the EQB drives like it. Mercedes-Benz aimed for sure-footedness and comfort above all, which makes the EQB a laid-back car to drive. Engineers also dialed in three levels of regenerative braking that can be selected using the paddles (don’t call them shift paddles!) on the steering wheel. The menu reads like my math grades in high-school: D-, D, and D+. D- is the strongest of the three; it unlocks the possibility of one-pedal driving on country roads. D yields roughly the same braking effect as an engine brake when you take your right foot off of the accelerator pedal, while D+ lets the EQB coast.

Hill after hill and turn after turn, the EQB feels … totally normal. Like a comfortable small crossover with a luxurious interior that happens to be electric. Its EV-ness isn’t put front and center; Mercedes-Benz didn’t program an outer space fake engine noise as in the AMG EQS, for example. That’s either a good or a bad thing, depending on your perspective. The one exception to this rule is the brake pedal, which can feel vague as the car juggles the hydraulic and regenerative braking systems. Stopping power is good, don’t get the wrong idea, but the pedal feel takes some getting used to if you’re coming from a gasoline-powered car. Not all EVs are like this.

Pricing for the EQB 300 starts at $55,550 for the base model, $56,800 for the Exclusive trim that adds niceties like proximity entry and a wireless phone charger, and $59,350 for the Pinnacle that gains a Burmester surround-sound system and a surround-view camera, among other features. Get the 350 and you’ll be asked to pay $59,100, $60,350, and $61,400, respectively. These figures include the reasonable $1,050 destination charge but are before the $7,500 federal tax credit or other available incentives. Buyers will also receive free 30-minute sessions for two years on the Electrify America network of charging stations, which is a boon because Mercedes-Benz has not shown an interest in paying for your gasoline if you take home a GLB.

Even with incentives factored in, the EQB is not cheap. It’s priced in GLC territory. That’s a disadvantage, and it’s not an insignificant one. In comparison, the front-wheel-drive GLB 250 is priced at $39,650, while adding all-wheel-drive bumps that figure to $41,650. Putting the GLB 35 in your driveway will cost you $51,000 including destination. With that said, electricity is cheaper than gasoline. The EQB is priced about on par to comparable EVs, including the Volvo XC40 Recharge ($54,645 including destination) and top versions of the Kia EV6, Hyundai Ioniq 5 and Ford Mustang Mach-E. Of course, as already mentioned, their performance, range and charging specs are superior.

If you’re in the market for a small crossover and you’re willing to consider all powertrain types, the GLB is a better overall value – it offers nearly the same pros and cons as the EQB in a more affordable package. If you specifically want a small electric crossover from a luxury brand, your choices are admittedly few. The EQB may not be the most competitive on paper, but it still makes a very strong case for itself – it’s spacious, practical and indeed more luxurious than the Hyundais, Kias, and yes, Teslas of the world.