The Mercedes-Benz EQS will spearhead an extensive array of electric-only models to be unveiled in the next years, all based on a new architecture. 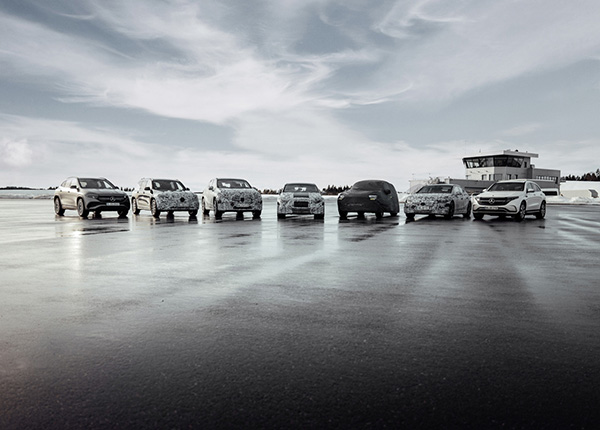 After the EQS, we will get to meet the EQS SUV and the EQE sedan, both models having been spied in pre-production attire in the last year or so.

We are not here to talk about those, but about a mysterious new SUV that may or may not be the high-bodied equivalent of the EQE, or even an entirely different model that hasn’t been announced yet.

Among the images that Mercedes-Benz chose to illustrate the information surrounding the upcoming EQS luxury EV sedan, one photo in particular caught our attention.

It was a photo showing the entire Mercedes-Benz EQ lineup, current and upcoming models. From left to right, you can see the recently unveiled EQA, the soon-to-be-launched EQB, the EQS SUV, the EQS sedan, our mystery SUV model, the EQE, and the EQC.

The strangely camouflaged model has been off everyone’s radar until now, with not a single prototype having been spotted in the wild.

With that in mind, there have been some rumors that Mercedes-Benz might be cooking up an electric G-Class at some point, but we are probably at least three years from even seeing it testing.

The only logical answer is that we are looking at the first pre-production prototype of the EQE SUV, which should start public testing in the upcoming months ahead of a late 2022 official reveal. Its positioning between the EQE and the EQC in the lineup would also draw us to that conclusion.

If that is the case, the model will go against cars like the recently launched BMW iX and the Audi e-tron, in the soon-to-be-crowded market of mid-size electric SUVs from premium carmakers.