The latest Mercedes-AMG E 63 S is one of the last great executive super sedans that Europe has to offer. A tech-festooned extravaganza on wheels, it looks very good, and still packs a sonorous V8 under that classy hood.

That’s right, while its smaller sibling, the upcoming AMG C 63, will feature an electrified four-banger, the E 63 rocks a twin-turbo 4.0-liter V8. With 603 hp (612 ps / 450 kW) and 627 lb-ft (850 Nm) of torque bouncing off the walls in the S guise, directed to the all-wheel drive system, tuned by the Affalterbach brand, via a nine-speed automatic transmission, it is a beast in a straight line.

Mercedes-AMG claims that the 0 to 62 mph (0-100 kph) acceleration is dealt with in 3.4 seconds. Top speed is almost on par with supercars, as the odometer will eventually read 186 mph (300 kph), should you find a long straight where you can legally hit such dizzying speeds. And it’s not all about crazy straight-line sprints, because the E 63 S can tackle corners relatively well too, and it is also very comfortable on the go. 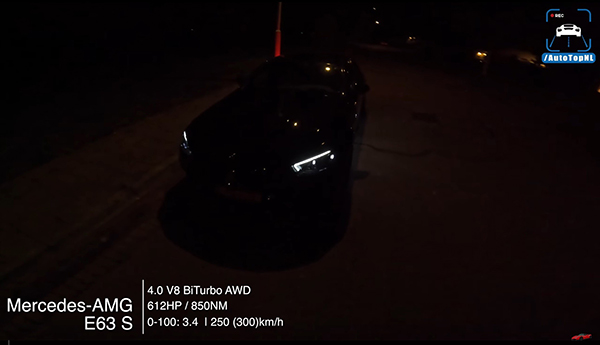 Anyone who has a soft spot for this model has likely seen tons of reviews, and comparisons with its biggest rival, namely the BMW M5, and probably a few POV driving videos too. However, if it’s one thing that they probably haven’t seen is a clip that shows it being driven around town, and on the highway, at night, with the cockpit bathed in ambient lighting and the eight-pot producing sweet music at a hard push of the right pedal.

So, if you wanted to take a short break, around 8 minutes long, from whatever you were doing, then this would be a good time to do so. Now, without further ado, let’s move on to the footage, shall we?