The letters C and S are as far apart as they get in the alphabet. Within Mercedes’ range however, they’re as close as they’ve ever been thanks to this all-new C-Class, unveiled in both sedan and estate form. It is the most comfortable and most advanced C-Class ever made, and Mercedes aims it straight at the BMW 3-Series, Audi A4, Lexus IS, Volvo S60, Jaguar XE, Alfa Romeo Giulia and the rest of the premium sports sedan segment. 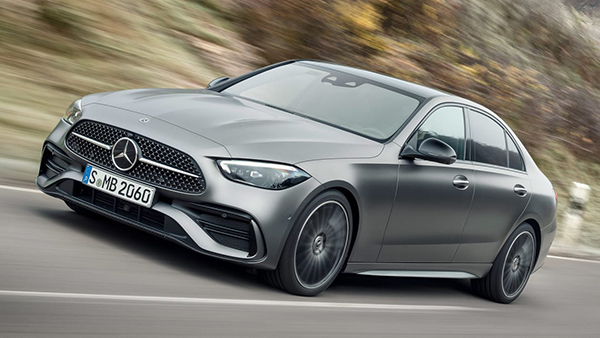 Mercedes has revealed the latest version of its most popular model internationally over the last decade: the C-Class, which enters its fifth generation in 2021 on the back of more than 2.5 million sales of the previous-generation car.

As ever, it lines up alongside perennial rivals such as the latest BMW 3 Series, plus facelifted versions of the Audi A4 and Jaguar XE. But in the years between the fourth and fifth-generation version of the C-Class, affordable all-electric alternatives like the Tesla Model 3 and Polestar 2 have hit the mainstream. SUVs have stolen a march on the compact executive saloon class too, and the premium family car landscape is changing quickly.

It means that the new Mercedes C-Class faces a more varied field of competition than ever before. As such, Mercedes has resisted an evolutionary approach. It has introduced a sportier new image, S-Class derived interior technology and wide-reaching electrification across the car’s powertrain line-up, which now includes plug-in hybrid models capable of 62 miles on electric power only. 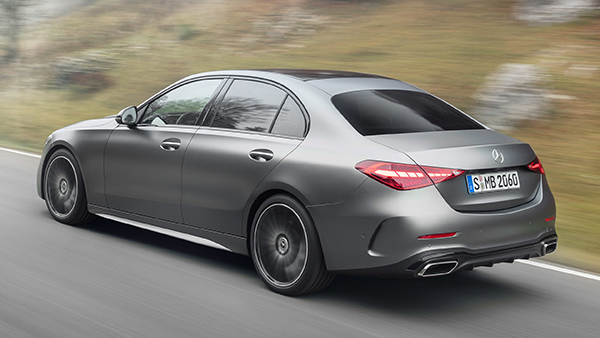 New 2021 Mercedes C-Class: design and platform
The C-Class rides on a heavily updated version of the Mercedes Rear Architecture (MRA) platform used underneath the previous-generation model. This new version of the MRA set-up has already found use underneath the latest S-Class, and the new C-Class benefits when it comes to this new technology.

From a styling perspective, the new C-Class embraces design cues introduced on the facelifted E-Class, while also adopting a sportier look than before. This is down to the new bonnet with its twin power bulges, the new, stronger shoulderline, and the attempt to turn the C-Class into a more ‘cab-backwards’ saloon, by pushing the passenger cell further towards the rear of the car.

The saloon is 65mm longer than before, at 4,751mm, and 10mm wider, at 1,820mm. These changes are combined with a 7mm lower roofline. The front and rear tracks are wider by 19mm and 48mm respectively, and the wheelbase has grown by 25mm too.

The nose of the car is heavily inspired by the E-Class, with a new grille and full LED headlight arrangement mimicking its larger sibling, and the same can be said about the new LED tail lights too. However, the C-Class saloon’s compact, sportier nature is signified in the new boot lid, with its small integrated lip spoiler. Boot space stands at 455 litres. 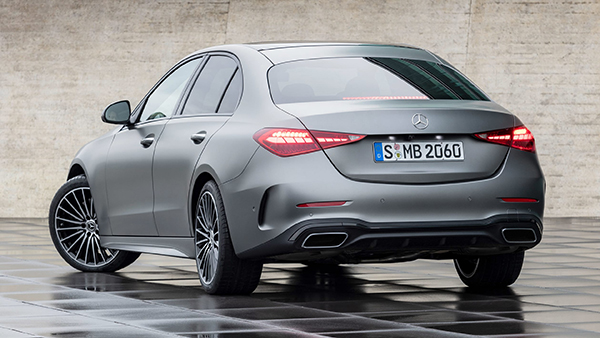 UK trim levels have not yet been announced, but it’s likely that the European Avantgarde spec will be badged Sport in Britain, with a more reserved look compared with big-selling AMG Line models and their Premium and Premium Plus variants. These get larger wheels than the standard 17-inch alloys, up to 19 inches in size, and also come fitted with an AMG Line bodykit, consisting of a more aggressive lower front bumper, side skirts, and a rear bumper with a diffuser and twin exhaust exits.

Alongside the saloon, the new C-Class Estate will be available from launch. It gets a similar makeover and also grows in length and width with a decrease in height, while its boot is 30 litres larger than before. With all seats in place there’s 490 litres of luggage room behind the rear seats. Folding them flat opens up a 1,510 litre loading area. An automatic tailgate is standard equipment.

No Coupe or Convertible versions of the C-Class will be available with this new-generation model. As part of a drive to reduce fixed costs and improve profits, they’ve been culled. Mercedes could look to re-enter the space vacated by the two models with a new standalone, more upmarket model, with a similar reinvention to that it has applied to the upcoming SL.

Rear-axle air suspension will now only be offered on plug-in hybrid versions of the C-Class, with it being standard fit on the C 300 e. New continually adaptive electromechanical are dampers offered elsewhere.

Optional four-wheel steering arrives, with the maximum steering angle of the rear wheels standing at up to 2.5 degrees. This reduces the turning circle to 10.43 metres, but the rear wheels also turn in the same direction as the fronts in high speed corners, for greater stability. 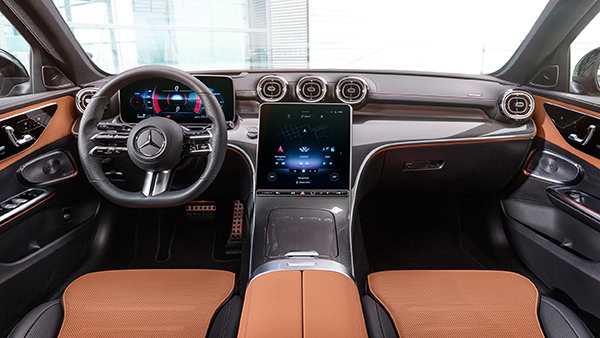 New 2021 Mercedes C-Class: interior design and technology
Contrasting with the E-Class inspired exterior, the new C-Class jumps ahead of its larger sibling with a wholly new interior. The cabin makeover is decidedly S-Class inspired, with a new dashboard layout that features a huge central touchscreen infotainment system as the main focal point.

There’s a split deck between the new look, rounded square air vents and the new central control hub, but the whole dashboard is angled towards the driver. The new touchscreen system, running the latest version of the MBUX operating system introduced in the S-Class, is offered in two sizes. By default, it measures 9.5-inches across, but a larger 11.8-inch version is also available. While it looks similar to the set-up in the S-Class, it’s not the same screen – the C-Class goes without the OLED display technology and haptic feedback offered on the flagship limo.

The instrumentation is fully digital for the first time in the C-Class. As standard, a floating 10.25-inch digital instrument panel is fitted, with a larger 12.3-inch screen available as an option. The look of both screens can be customised with three distinct themes: Discreet, Sport and Classic. 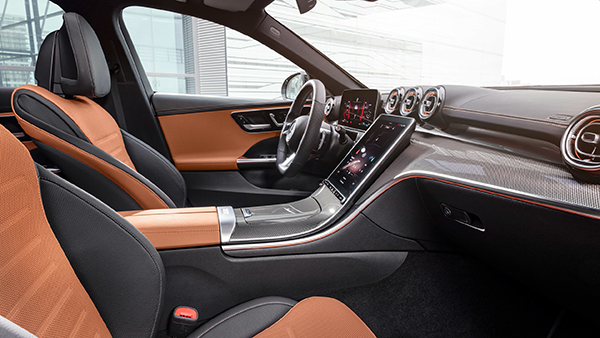 Head-up display technology is available, but not the new augmented reality HUD system found in the S-Class. Instead, augmented technology only applies to the navigation system, overlaying directional prompts on a live feed from a camera at the front of the car.

Live music streaming services have been added, allowing owners to link accounts to services like Spotify directly to the car’s infotainment system. Songs can be requested via Hey Mercedes voice control.

The new MBUX system means that over-the-air updates land on the C-Class too. As soon as an update is available, it will download automatically. This also means that buyers can now install new functions post-sale, such as music services or In-Car Office, by subscribing to or purchasing them directly from the infotainment screen.

MBUX Smart Home functionality is the final big new technological stride introduced by the new infotainment hardware and software. If you have smart home appliances or fixtures, such as lighting, shutters or heating, they can be linked to and controlled remotely from the car.

Mercedes has also updated the C-Class’s semi-autonomous driving assist with the latest Driving Assistance Package. This includes more responsive steering assist that works on motorways at speeds up to 130mph, more versatile radar cruise with distance control that works on more roads, and an updated traffic sign assist. 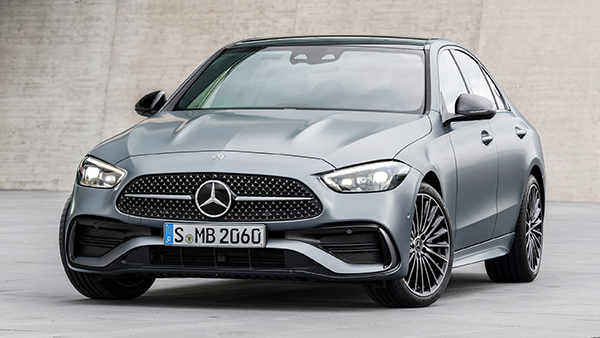 New 2021 Mercedes C-Class: powertrains and plug-in hybrids
The new C-Class is being launched with four-cylinder power exclusively, across a line-up of 48-volt assisted petrol and diesel, plus plug-in hybrid options.

Petrol versions of the new C-Class use a new-generation 48-volt system with a new belt driven starter-generator unit, delivering a 20bhp boost when required, and 200Nm of torque if necessary. It also enables seamless engine shut-off and start-up for emissions-free coasting.

The petrol line-up opens with the front-wheel drive, saloon-only C 180, which uses a 1.5-litre four-cylinder turbocharged petrol engine developing 168bhp and 250Nm. Mercedes claims 0-62mph in 8.6 seconds, with a top speed of 144mph alongside fuel economy of up to 45.6mpg and CO2 as low as 141g/km.

Four diesel options are offered, all using a turbocharged 2.0-litre four-cylinder engine with 48-volt assistance for the first time. The C 200 d kicks off the range with 161bhp and 380Nm, while the big selling C 220 d badge returns, with 197bhp and 440Nm, plus the option of 4MATIC four-wheel drive. 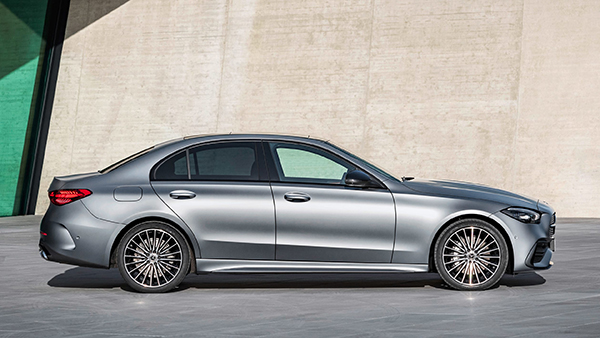 Mercedes has confirmed that the new C-Class line-up will feature more than one plug-in hybrid model, with petrol and diesel plug-in power offered.

Performance and consumption data have not been revealed, but Mercedes promises that just like the new PHEV S-Class, the C 300 e will be capable of running on battery power alone for up to 62 miles, with a top speed of 87mph in this mode. Optional DC charging at 55kW means a recharge can be completed in half an hour. 11kW three-phase charging for wallbox connections will be offered, too. 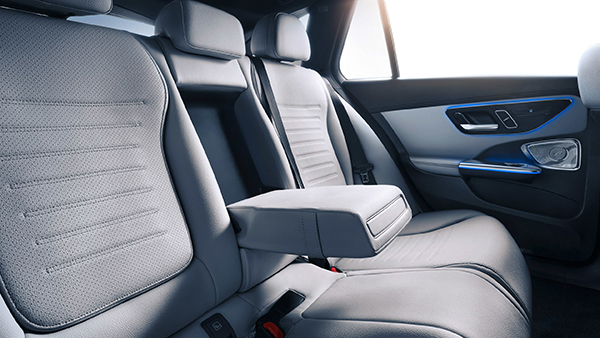 Mercedes has not yet outlined the specifics of the diesel PHEV model, but it will more than likely combine the same battery and motor tech with the C 300 d model, and be badged C 300 d e.

High-performance AMG models have not been revealed just yet, but it’s strongly rumoured that electrified four-cylinder power will be adopted for the next-generation C63, which could combine the 415bhp 2.0-litre four-cylinder turbocharged petrol engine found in the latest A 45 S with EQ Boost 48-volt mild-hybrid assistance for a target over 500bhp.

A UK on-sale date has not been confirmed, but in Europe, C-Class order books open on 30 March, before first deliveries in the summer. Prices are likely to start from around £35,000. High performance AMG models will follow in 2022.