The latest C-Class doesn’t have the most characterful engine lineup, so mild-hybrid diesel alternatives like the 300 d could actually make more sense than ever. The fuel efficiency, refinement and performance on offer go a long way to justify the high price tag, while factoring in the tech-laden interior and extra practicality, mean that the Mercedes is hard to beat in the compact executive estate sector. The C 300 d shows us diesel still makes sense, for the near future at least. 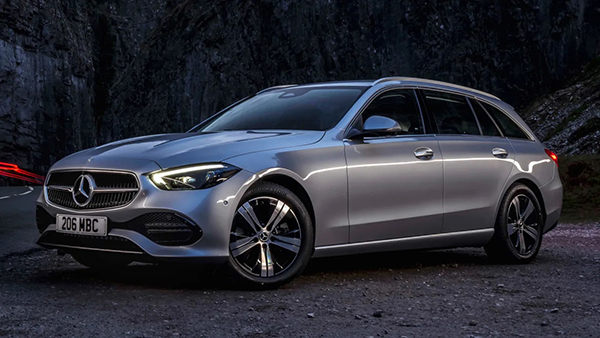 It’s no secret that the UK diesel market is struggling. 3.1 per cent fewer diesel cars have been sold this year compared to 2021 and it doesn’t look like that trend will change any time soon.

So with many buyers choosing to ditch diesel power for either a pure petrol model, a plug-in hybrid or even a full-EV, does diesel make sense in 2022? Mercedes obviously thinks so because the latest C-Class comes with a variety of diesel options – including this 300 d Estate model.

With the AMG 43 and 63 still yet to launch, the C 300 d sits just below the range-topping C 300 e plug-in hybrid petrol model in the C-Class line up. The 2.0-litre, turbocharged four-cylinder diesel is the same unit as you’ll find in the cheaper 220 d and essentially the same engine used in the previous-generation car.

Helping to modernise things is the use of mild-hybrid technology which, in the 300 d, equates to 261bhp and 550Nm of torque – quite substantial figures and second only to the 309bhp 300 e plug-in hybrid. The 300 d is actually the quickest of the current crop of C-Class with a 5.8-second 0-62mph time (5.7 in the saloon) and a top speed limited to 155mph. 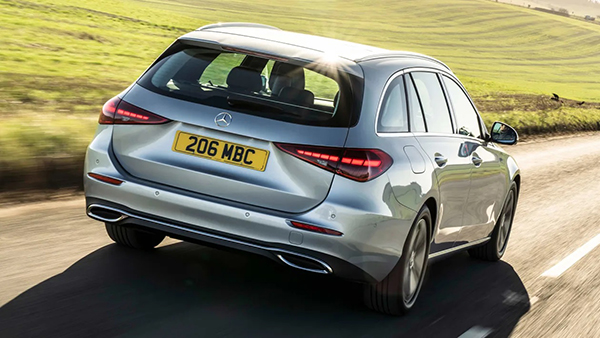 The relative lack of weight of the 300 d compared to the plug-in hybrid model is the reason for the extra pace (1,835kg versus 2,290kg), while it also helps to sustain impressive fuel efficiency. Mercedes claims a WLTP-rated 54.3mpg for the C 300 d Estate but we found it easy to get up to 59mpg after a mix of motorway and town driving.

There are no direct rivals to the C 300 d either, which makes its combination of excellent fuel efficiency and rapid performance even more appealing. If you want a diesel BMW 3 Series you’ll have to choose between the slower 320d or much more expensive 340d – both of which are thirstier. Audi’s A4 Avant diesel is limited to a 201bhp 2.0-litre model, and if you go further afield to the Genesis G70 Shooting Brake, you’ll find the 197bhp 2.2-litre oil-burner can’t live with the C 300 d’s grunt.

On the move the 300 d’s powertrain provides more than enough punch. During start up the diesel engine only serves up a quiet grumble and while the response might not be instant, the delivery of torque is consistent. Peak power is quite high up in the rev range at 4,200rpm, but the EQ Boost motor helps alleviate any loss of torque below that figure.

The Eco, Comfort, Sport and Individual driving modes don’t feel wildly different from each other; the steering gains a little more weight in Sport and the powertrain is a little more eager (mainly thanks to dropping a gear or two). 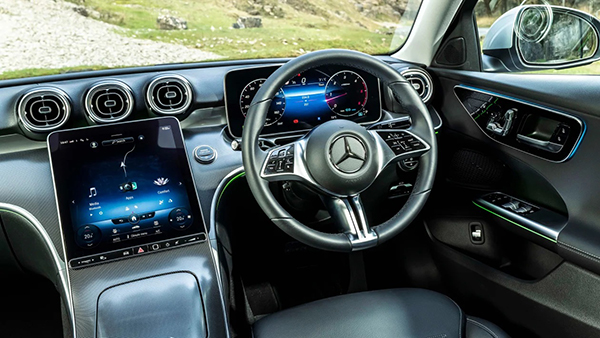 Part of the reason the driving modes don’t feel that distinguishable is the lack of adaptive suspension or ‘AIRMATIC’ as Mercedes calls it. It would be a nice alternative to have, but in truth the passive set up (which is lowered by 15mm on AMG Line versions and above) gives the C-Class tremendous ride comfort, especially at higher speeds where it almost replicates an S-Class-like waft.

It’s clear that the suspension has been tuned to deliver a slight bias towards comfort rather than sportiness, because the C 300 d does pitch up when you send all 261bhp to the rear axle, while there is some body roll as you weave through the bends – more than in a BMW 3 Series. The brakes are competent enough, though, and the pedal has a decent feel to it.

The steering has been greatly improved with much more precision over the old model – probably a side effect of the front end only being developed for four-cylinder engines rather than six or eight-cylinder units.

When you first step inside the C-Class there’s an instant wow factor that a lot of its rivals can’t match. The overall layout is so similar to the S-Class that if it were a little bigger you could easily convince passengers they were riding in Mercedes’ flagship car. 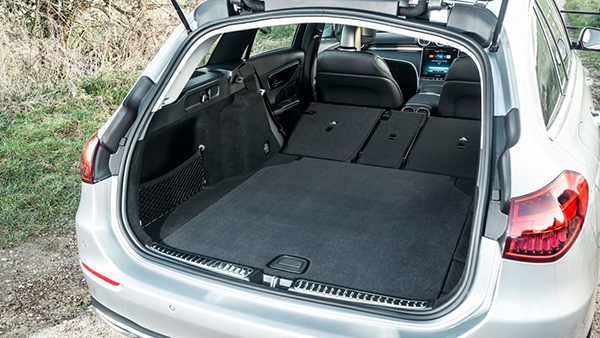 The build (and material) quality is top notch as you might expect; the interior thankfully avoids excessive use of piano-black trim by using a carbon-effect plastic across the dash which feels solid enough. However, the cabin’s standout features are the 11.4-inch central touchscreen and 12.3-inch digital driver’s display, which are taken straight out of the S-Class.

The MBUX system is slick and the graphics are crystal clear on both screens (all three on our car if you include the head-up display), the front and rear parking cameras are among the best you’ll find as well, but there are a few little niggles. The door-mounted seat adjustment buttons are a little fiddly to use and the steering wheel buttons require a deft touch to operate. The back-lit lighting for what seems like every surface might be too glitzy for some, but you can adjust the brightness which is helpful.

There’s lots of space in the rear of the cabin and the material finish is just as good, while moving along to the boot brings a welcome bonus. This new generation is longer which means overall luggage space has increased by 30 litres to 490 litres with the seats up and 1,510-litres with the rear seats folded.

At £50,090 the C 300 d is expensive in AMG Line trim (despite excellent levels of standard equipment), and buyers might find that the 220 d model seems like the more sensible option – especially with it using the same engine (detuned to 197bhp) and coming with the same amount of kit.

A BiK tax rate of 32 per cent for the 300 d is pretty good, especially when you consider that the petrol-powered C 300 model sits in a tax band four levels higher, while CO2 emissions of 136g/km means it’s more environmentally friendly than a BMW 340d (165g/km) or even an Audi A4 Avant TDi (159g/km).