Sound on! We have taken the first spy video of the next generation Mercedes-Benz C-Class Estate during some tests on public roads in germany.

Just over a week ago, we’ve seen the long-roof Mercedes C-Class on a winter adventure, dropping some of its swirly camouflage wraps in the process. There were two prototypes seen before, one likely showing an upper-spec model.

Our spy photographers have spotted the C-Class wagon again, but this time nearer the Mercedes-Benz headquarters in Stuttgart. Plus, it looks like a trim in between the two prototypes we’ve seen before.

That conclusion came from the fact that this prototype comes without a sunroof but it has tinted rear windows and black side mirror caps. It also has a set of similarly-sized wheels with the top-spec trim we’ve seen before, plus similar embellishments concealed within the wraps.

As for the lighting, the C-Class Estate seems to have adopted the configuration from the larger facelifted E-Class. The changes are more evolutionary than revolutionary – enough to give the compact car a more modern look than the outgoing model. 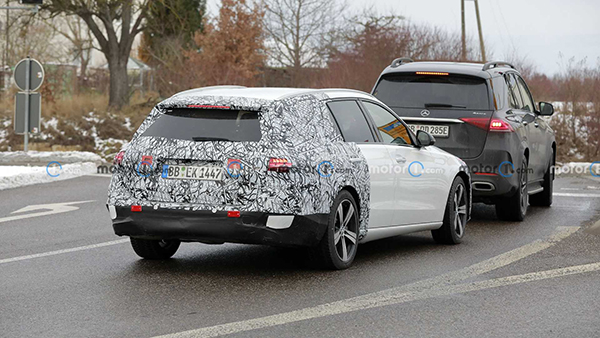 The wagon, or the T-Modell in Germany, will have to wait a number of months before its global reveal. The hotter AMG C-Class models will be launched further in 2022, along with the believed All-Terrain version of the C-Class.

It’s still unconfirmed whether the C-Class Estate will be offered in the US, but you should be aware that the automaker has trimmed down its US lineup to curb down costs. As such, don’t get your hopes up if you want a Mercedes wagon that isn’t as big and tall as the E450 All-Terrain.