The company car world feels like it is moving on from conventionally powered small executive saloons, especially those with a diesel engine under the bonnet. But if this C 220 d is a last hurrah for its type, it’s a fine one. We’ve still to try a full UK-spec example but on the face of it, the C 220 d offers refinement, comfort and cabin quality that would have been unthinkable on a car of this type barely five years ago – and with no likely hike in list price. Impressive. 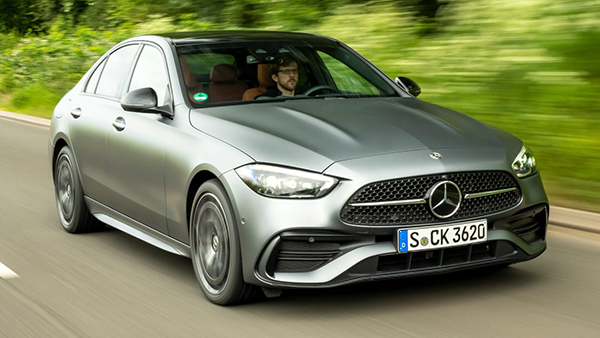 The pressure is on for cars like the Mercedes C-Class and its arch rivals, the BMW 3 Series and Audi A4. Previously rock-solid company car choices, they’re starting to feel the squeeze from legislation, the taxman and pure-electric alternatives.

This trend hasn’t gone unnoticed at Mercedes, of course. So for the latest incarnation of its small executive saloon, codenamed W205, the German brand has pulled out all the stops on technology, quality and, yes, electrification: every version of this car features some form of it. We were suitably impressed by the C 300 d when we tried it recently, but now we’ve had a chance to sample a left-hand-drive version of the C 220 d – traditionally the big-seller – on British roads.

To recap, this C-Class sticks with the same platform as its predecessor, but the set-up, called Modular Rear Architecture (MRA) has been heavily updated. The basic suspension layout is unchanged, with double wishbones at the front and a multi-link rear, but the profile and set-up have been totally revamped. The wheelbase grows too, by a couple of centimetres. 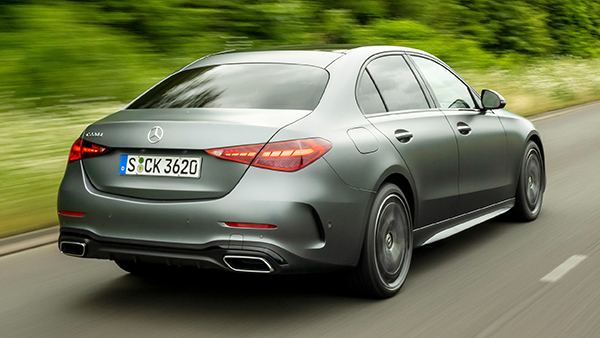 The 220 d uses the same four-cylinder motor that we tried in the 300 d, but with a more modest output. Even so, its 197bhp represents a useful increase over the old model’s figure, and with 440Nm of torque, it shouldn’t be short of punch. As with all models in the new C-Class range, the 220d features 48-volt mild-hybrid assistance. This uses an integrated starter/generator that harnesses energy that is otherwise lost during braking, then hands it back to the system to boost efficiency under acceleration.

You won’t really notice any of that going on in the 220 d. The 2.0-litre engine is an admirably smooth performer, with bags of torque kicking in at around 1,600rpm and mid-range shove that will push you up to motorway speeds with ease (the 0-62mph time of just over seven seconds feels conservative, if anything). The motor’s best work is done by around 3,000rpm, really, and that means its revs can be kept at a level where any four-pot diesel rumble is pleasantly distant.

The gearbox helps with this. The nine-speed automatic is standard across the range, and the transmission is a fine performer, with smooth shifts and an intelligent program with which you’ll soon feel in tune. It’s a really easy car to stroke along at speed, the C 220 d, and with barely 1,400rpm required to pull you along at 70mph in ninth, it’s also a quiet one. 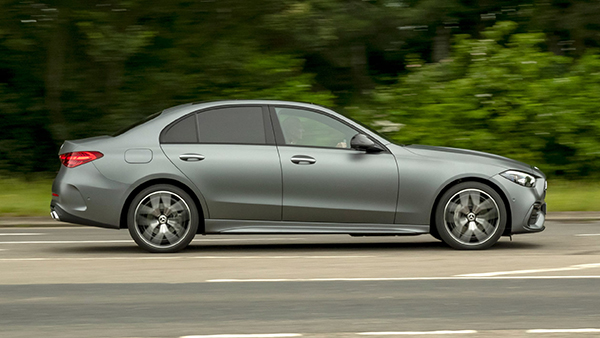 The chassis feels every bit as accomplished as the powertrain – although at this point, we need to point out that our German-spec vehicle was fitted with optional adaptive dampers and rear-axle steering, neither of which will be available in the UK.

We spent most of our time in Comfort mode, where the C-Class delivered a more sumptuous experience than the 3 Series and A4. Only the harshest, sharpest road imperfections get through to the cabin; the rest of the time the Merc does an excellent job of soaking up undulations and pock-marked surfaces.

Keener drivers who find themselves on the right sort of road would be well served by Sport mode, too. It tightens up the body control and gives the nicely weighted steering an even crisper response around the straight ahead. Even if the BMW 3 Series still has the edge on involvement, the gap to our test car felt smaller than ever – no mean feat, given the extra comfort on offer. But we must wait for a C-Class with conventional dampers before delivering a final conclusion. 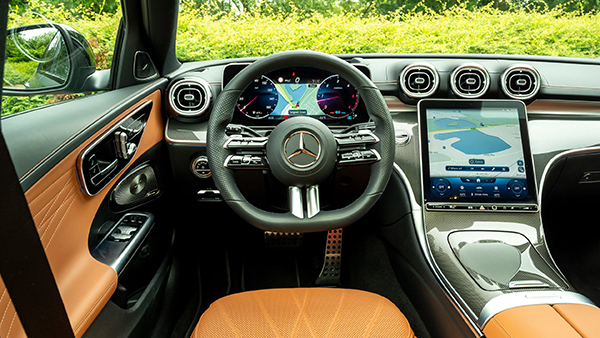 Mercedes has certainly ramped up the interior tech for this C-Class – drawing heavily on the systems recently introduced in the flagship S-Class limo. And the good news is that the UK branch of the company has elected to double down on the deal; other markets will get a choice of screen sizes for the infotainment and digital dashboard, but we’ll only be offered the larger versions, right across the range.

That means a 12.3-inch digital instrument panel, and a whopping 11.9-inch, portrait-layout touchscreen that dominates the centre console and controls many vehicle functions beyond mere infotainment. There’s also a further development of the ‘Hey Mercedes’ voice control system which, though still not infallible, does appear to be more responsive, accurate and intelligent than before.

That’s a good thing because while the displays are crisp and clear, there’s frequently so much going on that the interface can be a little confusing. This is never more evident than when the ‘augmented reality’ system brings up a front camera view in the middle of the central screen, obscuring the map. Moved away from the direct head-up display, video-based AR tech like this is of debatable merit, we’d argue. 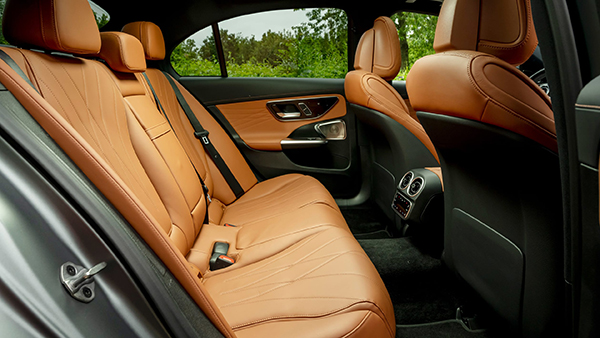 We’ve no such doubts over the Merc’s cabin quality, which is frankly stupendous. The high-grade finishes and excellent seats feel a match for pretty much any of the car’s rivals – and plenty more from the class above. Overall packaging is still more focused on the front passengers than those in the rear, mind; Merc claims up to 35mm more kneeroom in the back seats but despite the stretch in wheelbase, six-footers will still find it a little compromised.

The boot capacity, meanwhile, is unchanged, at 455 litres; clearly Mercedes has had little customer feedback asking for more space in this area, although we’re obliged to point out that the C-Class is 25 litres down on a 3 Series here.

Merc has yet to finalise UK pricing but the range will comprise four trim levels. Sport and AMG Line will bring LED headlights, heated seats, wireless smartphone charging and a rear-view camera, plus the aforementioned infotainment set-up. AMG Line Premium will add electric adjustment to the front seats, the augmented-reality navigation feature, a 360-degree camera for parking.

AMG Line Premium Plus will be the range-topper (at least until full AMG performance variants arrive in 2022) and it includes a Burmester 3D surround sound system, a head-up display, automatic climate control, a panoramic sunroof and music streaming over the MBUX infotainment system.