Mercedes-AMG GT Black Series is getting some serious power at OPUS! First up, we’re putting it on the dyno for a stock reading, and quite the surprise at how much power it makes. We can take a look at the modifications going on, and a check-up with the SLS BS and C63 BS too!

Rated at 730 PS (720 horsepower) at 6,700 revolutions per minute and 800 Nm (590 pound-feet) of torque from 2,000 through 6,000 revolutions per minute, the force-fed M178 engine in the GT Black Series has been given the LS2 designation due to numerous motorsport-infused modifications. However, the most important difference comes in the guise of a flat-plane crankshaft that gives the powerplant a racier note compared to the cross-plane M178.

Hailed as the most powerful V8 production engine from AMG, the M178 LS2 is assembled by hand in Affalterbach by one person. The GT Black Series, however, is more than specifications on a piece of paper. Tim Burton, the vlogger known professionally as Shmee150, has dyno’d his car to 776 PS (765 horsepower) and 878 Nm (648 pound-feet) of torque at the crank. 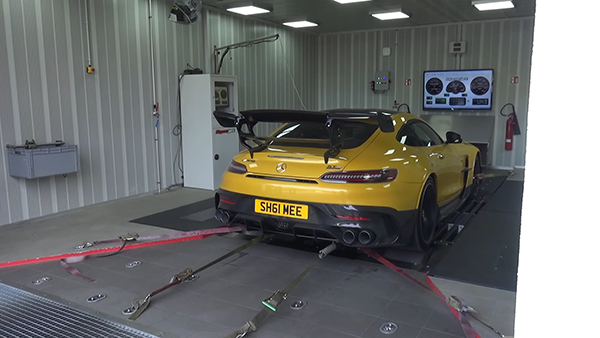 According to OPUS Automotive GmbH managing director Lukas Domogalla, “the manufacturer always has to make sure the car produces [the advertised] power even under worse conditions than today. It’s cold, you have proper fuel inside the car, and you end up with much better performance than if you would measure the car in the UAE at 40 degrees Celsius.” At the wheels, the Dynojet dynamometer reveals 710 PS (700 horsepower; corrected EEC).

Based in Meuspath, the German tuner has also measured the vlogger’s C 63 Black Series. As opposed to the GT Black Series, it features a slightly modified exhaust. Though it’s a higher-mileage affair, the crankshaft numbers are impressive: 510 PS (503 horsepower) and 585 Nm (431 pound-feet).

Going forward, Shmee150 intends to fit a more aggressive exhaust system to his amazing GT Black Series for an even better note with Lukas’ help.