The miracle that is the over-the-air transmission of updates and upgrades has forever changed the auto industry, allowing carmakers to throw into the fight the latest developments without having to physically gain access to the car. 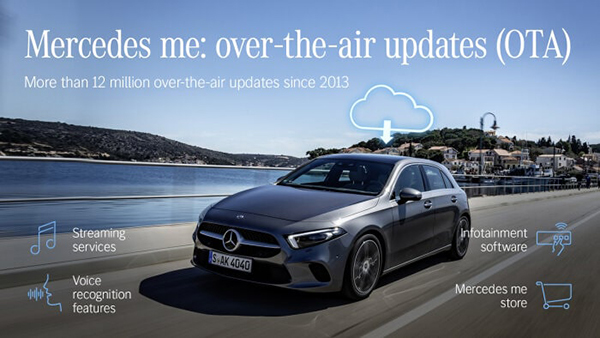 Many of the biggest names in the industry are already using over-the-air (OTA) updates, including Mercedes-Benz, a company that in recent years has invested heavily in high-tech solutions for its cars.

Mercedes has been using OTA as a means to spread changes to its cars since 2013, during which time over 12 million such improvements have been downloaded. But it wasn’t until 2018 that this practice really kicked off, with the introduction of the Mercedes-Benz User Experience system, or MBUX for short.

In the three years that have passed since, MBUX has grown to become one of the most comprehensive systems of its kind. And it continuously gets updated, you guessed, including by means of OTA.

Right now, Mercedes is rolling out, among others, access to streaming services TIDAL and Amazon Music to A-Class owners who are running the early, 2018 version of MBUX. They also get access to the Mercedes me Store, and language upgrades that in specific areas will make the MBUX switch to using the familiar form “you” when interacting with the owner.

But this seems like child’s play compared to what Mercedes has in store for the future. In the S-Class, for instance, MBUX will allow German engineers the possibility of updating more than 50 control units of the car.

“Over-the-air updates are not new for us. Thanks to our many years of experience and many successfully run OTA campaigns over the years, our customers always have the latest software in the vehicle,” said in a statement Georges Massing, Head of Digital Vehicle & Mobility at Mercedes-Benz AG.

“With ‘over the air’, it is not just software updates that we can deliver to vehicles already sold, but also features which haven’t even been invented yet. OTA enables the vehicle to become a more and more effective tool for the customer as time goes on.”