Mercedes-Benz X-Class six-wheeler was spotted somewhere in Eastern Europe. It has six wheels, but the traction is only on four wheels, with the third axle having no traction. But it looks spectacular. 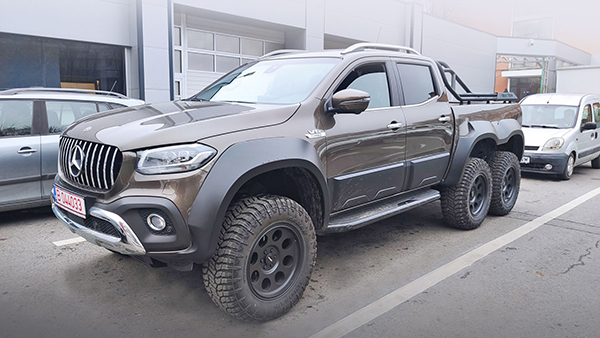 The Mercedes X-Class was a losing bet for Mercedes. The car was produced for less than three years, from November 2017 to May 2020, at Nissan’s Barcelona plant, with the X-Class sharing the platform with the Navara.

The car photographed by colleagues at 4x4adventure.ro is an X-Class modified by a passionate guy. On the suprastructure of the load bed is written Carlex Design, but the original X-Class made by Carlex Design is much more aggressive, with more oversized front air intakes, winch, and specially designed over-fenders. 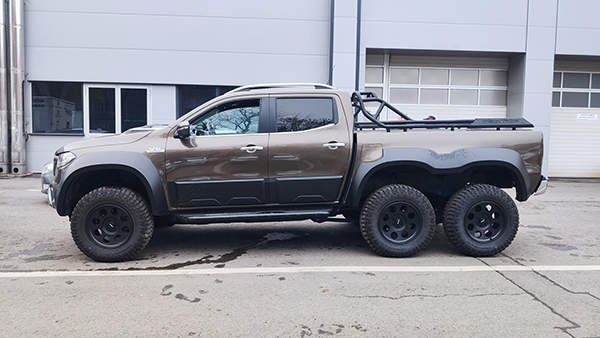 This pick-up truck has only Carlex design elements like the suprastructure and more prominent wheel arches, so we deduced that it was modified by a hobbyist who bought some Carlex accessories. Other modifications include a higher ground clearance, the second rear axle, a new connection with special arms for the rear axles, wheels and off-road tires.

However, the traction is not 6×6, as any cardan shaft does not connect the third axle to the rest of the drivetrain. That’s why we say it’s a Mercedes X-Class 4×6 because it has six wheels, while the drive is only on four wheels. 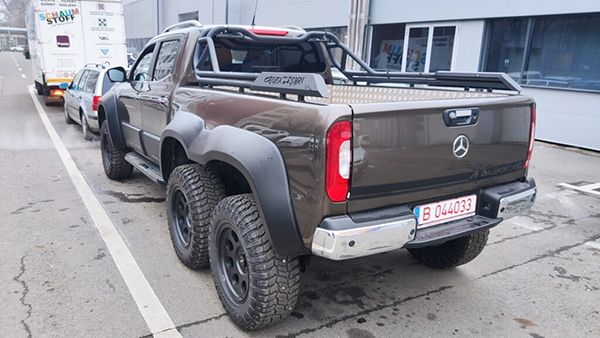 But the car looks spectacular thanks to the longer chassis and load bed and the higher ground clearance. On the road, it looks like a monster 6×6, even if it’s not as fierce as a G-Class 6×6. But it certainly doesn’t cost as much as a G-Class 6×6. The higher ground clearance helps in rough terrain, but the third pair of wheels don’t add additional off-road capabilities because it has no traction.

The car in the photos has a Mercedes’ 258 hp 3-liter turbodiesel V6 engine under the hood mated to a 7-speed automatic transmission.