Luxury doesn’t have to mean expensive, though the two terms are often perfect synonyms. In Peter Pfeil’s case, the perfect, most luxurious recreational vehicle meant an RV built to his exact specifications – by himself. 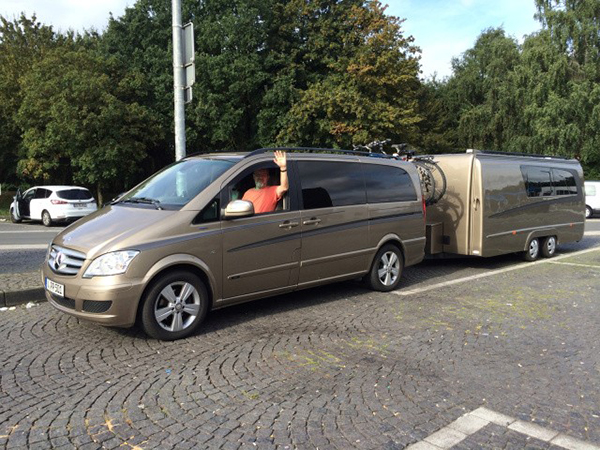 DIY (do it yourself) projects are often means of cutting down expenses, whether we’re talking about something as simple as a manicure that you choose to do at home, or huge projects like a DIY house, a van conversion or building a tiny home from scratch. Peter Pfeil’s unique (and uniquely awesome) trailer falls in the latter category: a project so large in scope and duration that, looking back on it, even he had trouble understanding how he was able to complete it.

Peter Pfeil’s project is not new, since he completed it in 2016 and took it to the Dusseldorf Caravan Show in the fall of that same year, before setting out on its maiden journey. However, it’s one worth revisiting time and again, and a perfect fit for autoevolution’s month-long Celebration Month theme, when we’re looking at luxury transportation, among other things. Pfeil’s home-built Viano trailer might not be luxury transportation if you go by the textbook definition, but it definitely fits the bill once you see how it turned out.

Sometimes, pure luxury is getting your dream-something, whatever that something might be and no matter how impossible it might seem. For Pfeil and his wife, that meant a caravan (trailer) that they could tow with their newly-acquired Mercedes-Benz Viano, that would offer all the creature comforts of home and match the towing vehicle. More importantly, though, the trailer had to have room inside for a garage, because the other thing Pfeil loved besides traveling was driving his Brabus Smart coupe in the Alps.

So how do you fit all these into a smaller-size trailer? As Pfeil told the German media at the time (as cited by Caravaning.de), you don’t. Not unless you’re willing to put in the extra work and build the thing yourself.

That’s exactly what Pfeil did for four long years, starting with 2012, when he bought the Viano. Also then, he bought a tandem axle trailer from English company Brian James, and started working on what would become the Viano’s brother from another mother: a trailer that matched and met all of Pfeil’s requirements.

It helped that Pfeil was an avid model-maker, so he had ample knowledge of plastics processing and GRP technology, as well as skill and plenty of patience. It didn’t help that he started the project without as much as a drawing, let alone a full plan.

Because a body with GRP sandwich panel would have resulted in a boxy trailer, Pfeil set out to create one that would fit the Viano in style and aerodynamics. This meant that a lower profile forced him to opt for a pop-up roof, which turned out to be the biggest challenge of the project. It also meant building the body by adding adjusters sawed from laminated wood and attached to the trailer platform, then adding rigid foam boards to form the outer walls. 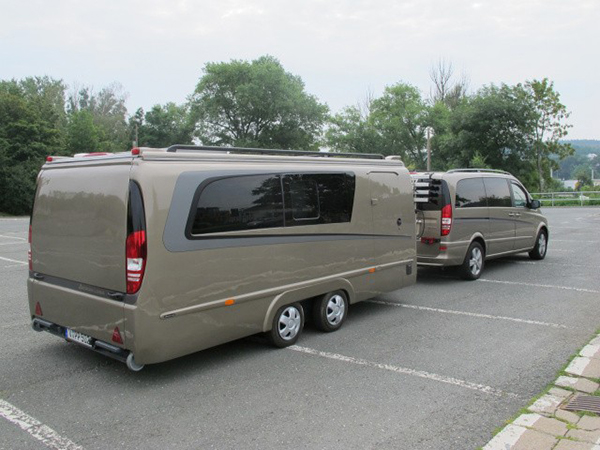 He sanded and filled the structure, and added epoxy resin and fiberglass layers, before sanding and smoothing some more. The only part of the project that he did not trust to do himself was the paintjob, which was carried out at a local specialized shop.

In 2015, the shell was done, so Pfeil could finally concentrate on the interior. Here was another challenge, since he had to build both living quarters and the parking space in the same compact footprint. So, he opted for a fold-out bed slash twin couches and stools that could be backed up against the walls, thus freeing the space for the Smart roadster.

On the end opposite the entrance, he built a kitchen module with a sink, stove and ice box, and enough storage options to guarantee comfort on the road for the missus and himself. He also included a washing facility with a small shower, and hid a portable toilet in one of the cupboards nearby.

Though basic, the interior came out very nice, revealing Pfeil’s nearly-obsessive attention to detail. The entire project is all the more impressive if you consider the fact that he did most of the work out on his driveway, at first whenever he had some free time from work and then, after retirement, as a full-time activity.

When he took the Viano and its matching trailer to Dusseldorf at the caravan trade show, he was impressed by how many people assumed it was some custom job from an established trailer company. He never did say how much he spent on the Viano trailer, but he once complained about taking too long with it.

“In retrospect, I have to admit that it was a bit crazy to tackle a project like this as a do-it-yourselfer,” he said. “I didn’t count the hours worked. But it doesn’t matter, because building was always fun. But honestly? The fun shouldn’t last four years…”

Whatever regret he might’ve felt then was probably washed away by the incredible experiences he soon had on the road with his Viano and the matching trailer.