The 2022 Mercedes-Maybach S-Class is the Swabian definition of pure, ultimate luxury. After the opulence and expense of the double-M badge’s first reinterpretation led to mediocre sales in 2002 and again in 2012, the last generation was a complete success, taking a more pragmatic and modern approach at a more attainable price. Based on the standard Mercedes-Benz S-Class, over 60,000 Maybach-badged sedans left the factory in 2015 and a good 80 percent of those went to China.

The new Maybach, based on the latest W223 S-Class, is set to once again show what Mercedes’ luxury brand can offer the top one percent. And it will do so along the final iteration of an iconic engine: Mercedes’ last twelve-cylinder engine. The twin-turbocharged 6.0-liter V12’s last hurrah will be to the tune of 612 horsepower and 664 pound-feet of torque in the S680. If you’re a philistine, there’s also an S580, with a twin-turbocharged 4.0-liter V8 with 503 hp and 516 lb-ft. The Chinese market’s horrendous luxury tax, meanwhile, will limit the People’s Republic to a six-cylinder Maybach S480. 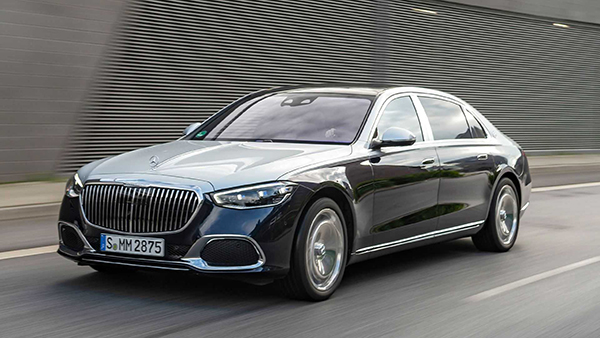 What Do You Get? Whatever You Want.
All-wheel drive is standard in all Maybachs. Customers can also choose from two rear-axle steering systems – one that swings the back wheels up to 4.5 degrees and another that offers up to 10 degrees. The familiar Airmatic air suspension with adaptive damping and Active Body Control should deliver the kind of comfort Maybach customers expect.

In case the standard settings for these systems don’t, though, there’s a dedicated Maybach Mode, which sets the dampers to their softest setting and forces the car to set off in second gear. You’re unlikely to spill your champagne when your chauffeur activates this setting. Oh, and speaking of champers, there’s a refrigerator in the rear and a pair of flutes to accommodate your favorite bottle of bubbly – we recommend Veuve Clicquot. You’ll enjoy the crisp brut while taking advantage of the additional legroom that comes with the Maybach-specific 3.4-meter (133.9-inch) wheelbase (19 centimeters, or 7.1 inches longer than a standard S-Class).

From the exterior, you’ll identify the Maybach by its longer rear doors, a polished aluminum B-pillar, a custom hood with a silver bar, and a huge grilled inspired by the 2016 Vision 6 Concept. Because this is 2021, the Maybach logo in the C-pillars lights up. As for V12-specific touches, there are chrome grilles in the front intake to the V8’s black finish, as well as dedicated 20- and 21-inch wheel options.

Beyond those flashy touches, elaborate two-tone paint jobs are available on request. They take up to a week to complete and include a hand-painted parting line that – forgive me, England – is much cleaner looking than what you get on a Rolls-Royce. Compared to the last-generation car, Mercedes has distanced its Maybach model from the S-Class in a far more dramatic and substantial way. The clientele will be happy about that.

Technologically, the uber-sedan takes the same advances introduced on the current S-Class and goes further. There’s a Maybach-specific active noise cancellation system as part of the Burmester 4D surround audio system. The new door functions, which must have been developed by a handful of very playful engineers, are also an absolute highlight. If opening or closing the doors yourself is just too much of a pain, there are no fewer than seven different ways to manage, including gesture controls. A small swipe and the door closes, as if you’re using The Force. You can do the same magic trick with the sunshade for the huge sliding glass roof.

Of course, the Maybach interior can do a thousand other incredible things, but we’ll get to that in a moment. Because if you want to know whether to spend your hard-earned fortune on a Rolls-Royce Ghost or a Maybach S-Class, you also need to know how Mercedes-based four-door moves. A big plus for the Swabian flatterer is its price: even with a twelve-cylinder engine, it starts at 216,000 euros ($261,954), whereas you’ll have to fork out at least 330,000 euros ($400,207) for the Ghost. 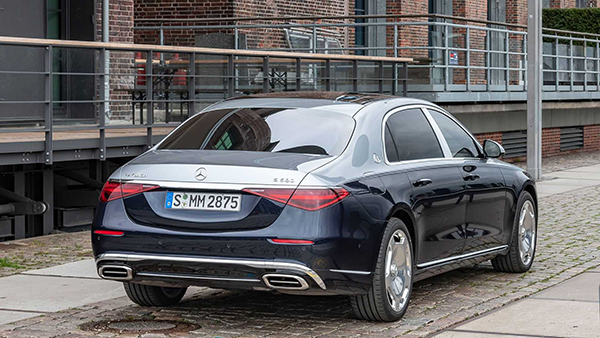 Superlative Luxury, Superlative Driving Experience
Let’s start with the S580 (so there’s still room for improvement). It doesn’t seem to bother the Maybach at all that we get in at the front left instead of the rear right. Anyone familiar with the new S-Class will have no problems here, as at least in row one, the differences are almost non-existent. That’s good, because you can hardly build a cockpit much nicer or of higher quality.

As expected, the XXL-Benz cruises along smoothly and almost silently. The V8 responds to throttle commands elegantly but firmly. A gentle rumble reaches the ear. Potency is undoubtedly present, but that’s all you’re supposed to hear. Like the cabin, the driving experience itself is very similar to what we know from the new S-Class. And yes, that’s excellent news.

The steering is smooth and very coherent. Roll behavior and suspension comfort are in a class of their own. Yes, of course it’s soft in here. And it also bounces noticeably over longitudinal waves, but all that with an excellence and coherence that contributes to complete relaxation. Chauffeur veterans may notice the differences in Maybach mode, but the car feels no more or less like a flying carpet than in Comfort mode.

Irritatingly, “Sport” is also available. So we quickly barked “Hey Mercedes,” commanded the playback of Richard Wagner’s Ride of the Valkyries (the voice control of Apple Music in newer Mercedes products is still an absolute show), and pounded the pin into the floor. Brief shame at the completely unsophisticated “pedaling” of a Maybach gives way to amazement at how well the big sedan carries out my crude commands.

Countless comfort gadgets in the rear and a massive increase in sound deadening (in the wheel wheels, among other areas) give the car an extra 175 kilos (386 pounds) to haul around compared to a long-wheelbase S580. The total weight here is 2.3 tons (5,152 pounds). But thanks to the super-effective 10-degree rear-axle steering, this giant is also agile.

In fast curves, it has amazingly good control. Sure, it stacks and wobbles a bit, but the grip is excellent, and understeer is hardly an issue. This mighty behemoth inspires almost unshakable confidence, even during ambitious driving over narrow country roads. So, if you have enemies and are often on the run – the car shouldn’t be the reason.

Of course, the S680 is even faster – at least in a straight line. But forget the performance, because this is Mercedes’ last twelve-cylinder engine. For that reason alone, you should buy it. If the eight-cylinder was already striving for discretion, it almost seems like an uncouth bruiser against the silky V12.

The combo of smooth power delivery and inexhaustible thrust is hard to resist. The 6.0-liter has a handsome punch, with the momentum that results when so much power pushes so much weight inspiring respect. And fascination. Especially because the S680 exerts its power so discreetly. It never gets really loud, and it doesn’t rev any higher than 5,500 rpm.

By the way, the V12 also handles briskly driven curves with a surprising amount of poise, despite another 60 kilos (132.2 pounds) more on its hips. All in all, it’s a very special experience… and one that most customers will probably miss completely. Because let’s face it, the place to be in this car is clearly the back seat. 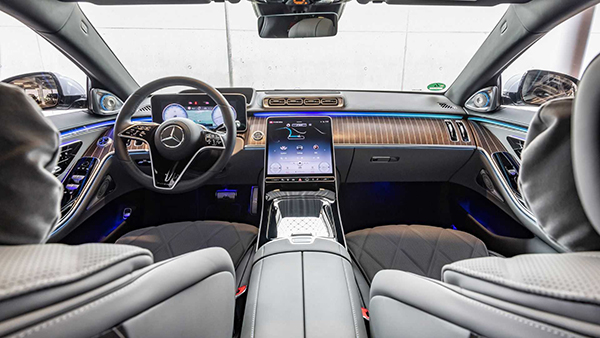 An S-Class, But Better
Well, open the door by remote control, by pressing a button on the chauffeur’s side or – ugh, how mundane – by pulling the door handle. If you’re brave and always have clean pants, you can choose the white interior as shown in the pictures. The individual rear seats recline up to 43.5 degrees and are, of course, endlessly comfortable, especially the additional cushion in the headrest. It’s the epicenter of softness. The seat belts automatically retract towards you and are then anchored in illuminated belt buckles.

The forward view is also very nice. Wood lines the backs of the front seats, which include large screens and fancy little tables. Plus, the front passenger seat tilts forward another 23 degrees beyond the 90-degree position for more legroom.

So you’ve got space galore (I was able to stretch out completely at six feet, one inch), and you can recline nicely, too. All the more so because the leg rest now extends 50 mm (2.0 inches) further and now has a massage function for tired calves. Also new: a heater in the seat that only takes care of freezing shoulders and neck. If it weren’t so pleasant, one would really have to be ashamed of so much luxury. And so much silence. The S-Class is already the leader when it comes to noise, vibration and harshness, but the Maybach goes one better. Among other things, with thicker glass and more insulating foam behind the wheel arches.

As mentioned earlier, the Maybach has the same high-tech features up front as the regular S-Class. That includes the latest MBUX infotainment generation as well as the formidable augmented reality head-up display or the not-so-formidable 3D instrument display, which tends to drive the eyes crazy rather than help in any way.

And of course, the Maybach should still be able to drive autonomously to Level 3 in designated areas by 2021 – if the lawmakers want it to. Sooner or later, the ultimate chauffeur-driven limousine will no longer need a chauffeur. 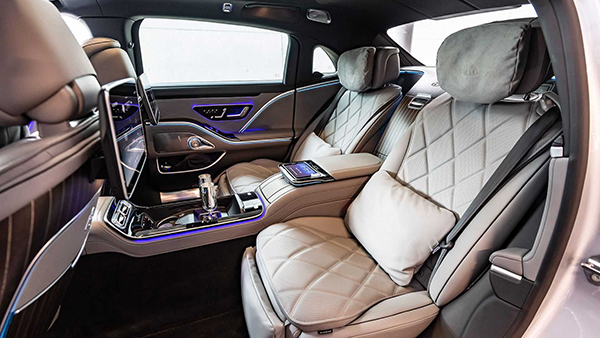 What More Could We Ask For?
The new Maybach takes the technological supremacy of the S-Class, its outstanding ride comfort, and its grandiose interior, to another level. Ambience, workmanship and technical inventiveness in the rear are likely to be unparalleled. And the giant thing doesn’t even drive badly around corners. Moreover, the very last V12 in a Daimler is naturally an event.

It’s hard to imagine that you can travel more luxuriously anywhere, even if some of its competitors cost almost twice as much. Anyone looking for this very small and special niche should consider the new Mercedes-Maybach.