Mercedes-Benz S-Class has been untouchable, until now. Finally, another flagship sedan stands a chance of intercepting Benz intenders before they default to an S-Class, and that party-crasher sedan is from Mercedes itself. The fully electric EQS aims for the same top end of the market as the S-Class, but does so with a fresher formula than its conventional, almost stagnant counterpart.

At the top of the non-AMG EQS range is the EQS580, which keeps up with a Mustang Shelby GT500 in a straight line while suffocating occupants with silence and luxury. But this gas-versus-electricity battle is about more than just numbers and stifling quiet. If you have more than $100,000 for a luxury car that symbolizes wealth and good taste, you’re probably going to look for a three-pointed star. Now, there are two choices when you get to the dealer. Both full-size Mercedes four-doors are 2022 Car of the Year finalists, but only one earns a first-place recommendation in this comparison. Which one is it—the gas model, or the new-age EV? 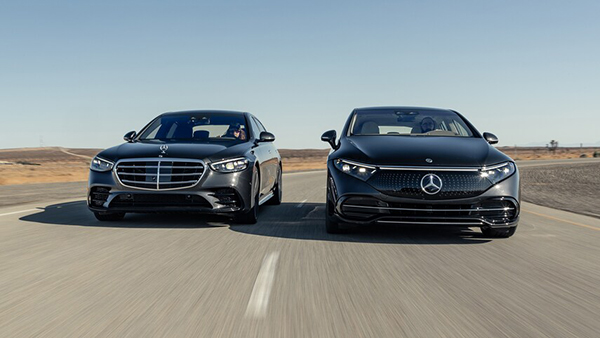 Mercedes Luxury, Imagined Very Differently
“S580” may literally be a part of the EQS580’s name, but the two expensive luxury cars execute six-figure luxury in vastly different ways. The S-Class doesn’t stray too far from what’s made it a dominating force in its segment. Now available with I-6 and V-8 engines, the S-Class will add a plug-in hybrid model soon for those not ready to plunge into a fully electric future. And thanks to the EQS, loyal Mercedes buyers no longer need to look to the nearly $100,000 Tesla Model S or the spectacular—but barely established—Lucid Air. We’re using the term luxury sedan loosely in this comparison; because the EQS580’s rear glass lifts with the trunk lid, it’s technically a hatchback.

Both the S580 V-8 and the EQS580 are far quicker than most owners will expect, yet each car relaxes its occupants with quietness and layer after layer of luxury and technology. Under its long hood, the S580’s twin-turbo 4.0-liter V-8 pumps out 496 hp and 516 lb-ft of torque. Acceleration to 60 mph comes in just 4.0 seconds despite an as-tested 4,961-pound curb weight, impressive in most comparisons but not this one.

The EQS580 weighs 5,822 pounds, but that heft is propelled by front and rear motors combining for 516 hp and 631 lb-ft. With standard all-wheel drive like the S580, the EQS580 hits 60 mph in only 3.7 seconds (the single-motor, rear-drive EQS450+ model is a bit slower). The Lucid and Tesla are (much) quicker but really, who cares? These are luxury sedans, not dragsters. Numbers aside, the sensation of hushed and near-instant acceleration at any speed is an amusing sensation we enjoy, and it’s one the gas-fed S580 can’t quite match.

Surreal Ride Quality
The S-Class also—shockingly—falls behind in ride quality. The way the EQS580 isolates passengers from what’s underneath their feet is simply extraordinary, even when you opt for 22-inch wheels. Compare that with the S580, which delivers a merely decent ride with 21-inch wheels, an experience that improves if you stick with 20s. Still, it’s no match for the EQS, and “merely decent ride” is never a phrase we want to use in the same sentence as “S-Class.”

Four-wheel steering makes both cars more maneuverable at city speeds than you’d expect from four-doors measuring in well over 200 inches in length. Thanks to that technology, the EQS580 has an astoundingly tight 35.8-foot turning radius. We’d recommend considering the option on both cars.

The EQS580’s light-weighted steering belies its Tahoe-esque curb weight, but don’t expect much feel or sports-car-like behavior on a winding road.

“The EQS580 is a gigantic, electric sofa that moves around under its own power,” said deputy editor Alex Stoklosa, encapsulating how the new Mercedes feels.

The S580 handles itself better, but you never forget how much car you’re hauling around those curves. Unless you’re interested in the AMG version of both models, don’t expect the EQS and S to beckon you to drive faster.

No matter how you drive these dueling flagships, neither is engineered with natural-feeling brakes. The S580’s stoppers were described as “mushy,” and the more sensitive types out there (hi, Mom and Dad!) may feel the car slow down uncomfortably quickly right before you come to a stop. Brake feel is worse in the EQS. Technical director Frank Markus called the EQS580’s brakes “spongy and imprecise.” We appreciate the technology behind the brake pedal that moves based on the regenerative braking’s rate of deceleration, which is supposed to make the entire system feel more natural as the driver adds their own braking input to slow the EQS to a complete stop. Even so, take it from road test editor Chris Walton: “The soft brake pedal is not confidence inspiring in the least.”

Comparing Electric To Gas, Mercedes-Style
If the EQS450+ or EQS580 could match the 406-520-mile Lucid Air in EPA-rated driving range, the scales might tip in the favor of the electric Mercedes. But as it is, the EQS580 can drive for 340 miles before needing a full recharge. Compare that with the S580’s 442 miles in the same combined city/highway EPA cycle, or the six-cylinder S500’s 530 miles. As good as the S580’s V-8 is, our experience with Mercedes’ mild hybrid I-6 has been so positive, we’d suggest S-Class intenders try an S500 before signing for an S580.

Like most electric cars, the EQS580 can be recharged to from 10 to 80 percent in only 31 minutes, but the S580 can refuel to 100 percent in 5 minutes at utterly common gas stations. The EV’s disadvantage is only important on a road trip; everywhere else, the EQS wins in the luxury of convenience. It’s hard to beat the convenience of pulling into your driveway, plugging in for the night, and never visiting a gas station again except for pit stops.

The S580 is quiet most of the time, but the EQS580’s EV powertrain takes things to a higher level. There’s nothing like the quiet of an electric car to enhance the sound quality of whatever you’re enjoying on the highway. That hushed cabin and slick aerodynamics come at a steep price, however. To achieve a drag coefficient of only 0.20 on the EQS, it feels to us as though Mercedes sacrificed too much in terms of design. We can appreciate a new design direction, but the blob-like EQS leaves a lot to be desired, stylistically. The Tesla Model S and Lucid Air manage similar or better EPA-rated efficiency with superior range and arguably more pleasing design. 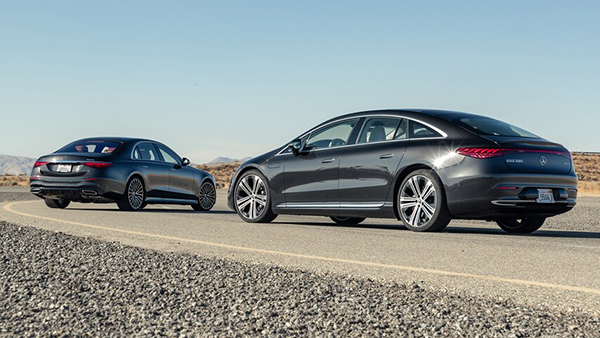 EQS Vs. S: Which Executes The Details Better?
Neither the EQS nor the S-Class inspired uniform praise among MotorTrend editors, but it’s impossible to miss the premium touches everywhere you look. The interiors attempt to mix luxury with technology in such a way that the latter doesn’t overwhelm the former. That’s a challenge in the EQS580, whose Hyperscreen combines a 12.3-inch digital instrument cluster with a 17.7-inch central touchscreen and a 12.3-inch touchscreen for the front passenger. Spend a little time with the system and its voice commands, and you’ll get used to it. The EQS interior feels airier up front than the S-Class and offers exquisitely designed air vents, but we noticed a couple less-than-premium interior materials in both cars. We also found the front seat controls of the EQS and S-Class harder to use than they’ve been in previous models with similar controls. One unusual advantage for the EQS: Its hatchback design makes loading cargo easier.

You sit higher in the EQS than you do in the S-Class, but the high cowl means some drivers may feel claustrophobic inside, as they have a limited view above the dash. That won’t be a deal-breaker for most buyers—there is no such thing as a perfect car—but the back seat of the EQS can’t compare to the excellent rear quarters of the S. What you’ll notice first: The S-Class has a longer and more comfortable seat cushion. The floor of the EQS is also too high for rear passengers, an oddity necessitated by the floor-mounted battery.

Where both cars need urgent attention is—and we’re not joking—the exterior door handles. They sleekly emerge from their flush housings on the doors so you can pull them out and open the door. The problem comes with the strength you must muster to open the doors. It’s a silly issue to have, but it’s real, and we hope a fix is on the way, though in the EQS you can option it with power-opening doors that offer up mechanical assist once the doors are unlatched.

A Frustrating Conclusion
The EQS and S-Class earned their way to the finalist round of MotorTrend’s 2022 Car of the Year competition, despite naysayers in both camps suggesting the Benzes weren’t quite up to par. Some suggested the S-Class had lost its way as a tech leader of the brand, while criticism of our S580 test car’s ride quality and brake feel didn’t help. The EQS has incredible ride quality and a pleasing sense of heft—exactly what we want in a six-figure luxury car. Even brushing aside its odd brake feel and OK driving range, where the EQS really loses is the rear seat and styling.

“The EQS is a technological tour de force, and it’s an even better sensory deprivation chamber,” digital director Erik Johnson said. “It’s a masterclass in luxury, and clearly points the way to what cars will eventually be in our [SAE autonomy] Level 4 or Level 5 future, and how the luxury companies like Mercedes intend to set themselves apart. And yet, the cowl is so high that I feel like I’m sitting at the kid’s table when I drive it, and it looks like a prescription shoe.”

Were we comparing E-Class-level cars, this might go a different way. But despite its imperfections, the S-Class provides a good all-around experience without any significant missteps. That’s why we’re frustrated. We like where Mercedes is headed, but in a segment of cars you want, not need, the EQS can’t yet match the mighty S-Class. That legendary nameplate has been continually updated and improved over a half century; we suspect it won’t take nearly as long for Mercedes to engineer and design a true S-Class of electric cars.

Verdict: Despite its limitations, this is still the luxury sedan standard-setter, for now.

Cons:
– Knees-high rear seat experience
– Space lozenge styling
– EQS580’s Hyperscreen may be too much for some

Verdict: Intriguing and solid electric luxury sedan from Mercedes let down by a couple tough-to-fix flaws.