There’s a major development on the electric car front coming next year for Mercedes-Benz: the flagship EV with motors and battery will launch into the world as the EQS, marking a point when the Germans will forever be committed to going down the electrification path. 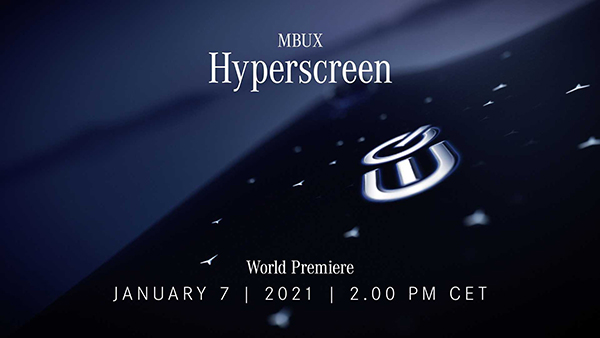 The Mercedes-Benz MBUX Hyperscreen is the German brand’s next-gen infotainment system that debuts January 7 during the 2021 digital version of the Consumer Electronics Show. The automaker is keeping mostly quiet about the tech but says the software now incorporates artificial intelligence for the operation of the infotainment, HVAC, and vehicle functions.

The name Hyperscreen is apparently apt because there’s a curved screen that runs the entire width of the dashboard. Even the front passenger gets access to the display, and Mercedes says this person’s “digital experience is as emotional as it is intuitive and effortless.”

MBUX Hyperscreen will make its debut as an option for the Mercedes-Benz EQS electric sedan. The vehicle doesn’t get a full debut until later in 2021 and goes on sale in the US in the second half of that year as a 2022 model year product. The preview of the system at CES might be our first good preview at the upcoming EV’s cabin.

Unfortunately, Mercedes’ teaser doesn’t tell us much more about the MBUX Hyperscreen tech, but the tech is clearly the next step in the ongoing infotainment size wars where automakers are making increasingly large screens. Largely since the introduction of Mercedes’ own MBUX dual-screen display, companies have been pushing their screen farther across the dashboard.

The Porsche Taycan was the first widely available model to expand its screens so far that the passenger got their own display. The Honda E also adopted dashboard-spanning infotainment, including separate monitors in the corners for the digital sideview camera feeds. At least in concept form, the Jeep Wagoneer showed off a similar style, albeit one that separated the screens with vents or pieces of trim.

Mercedes-Benz is touting the EQS as a gamechanger when it comes to electric sedans. The company is aiming for a range of over 435 miles (700 kilometers) in the WLTP test. In addition, there’s available HEPA air filtration. There are rumors of an AMG version with extra power, too.