Mercedes-Benz will roll out a new infotainment architecture called MB.OS that will replace the MBUX system in all of its vehicles, likely starting with the next-generation MMA compact car platform. 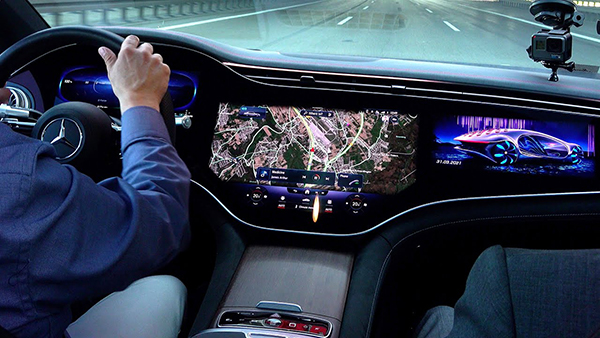 With its new MB.OS architecture, Mercedes-Benz is pairing with ultra-HD video developer Unity to bring gaming realism into the automotive world. It also is upgrading the “Hey Mercedes” personal assistant’s intelligence and interactivity into a 3D “Star Avatar” that will be more akin to a “digital butler,” said Magnus Östberg, Mercedes-Benz chief software officer.

Using the recently launched “Hyperscreen” digital display that spans from pillar to pillar (pictured above, but with the existing MBUX variation found in the Mercedes EQS), the MB.OS system will allow for 3D navigation that can zoom from satellite view down to 10 meters. It also will account for what time of day it is to ensure an accurate real-time display.

“It’s your environment right in front of you. It’s as much reality as possible in a navigation system,” Östberg said. Navus will be the technology partner for the navigation engine.

Östberg, speaking at a media briefing here, said Mercedes has been using machine learning to examine the accuracy, problems, and frustrations with the existing MBUX infotainment system and its “Hey Mercedes” voice controls.

The next-generation interactivity will be able to curate a playlist, and provide eco-driving coaching and hints while the vehicle is in motion, said Benjamin Kuhn, senior manager UX/UI design for Mercedes-Benz R&D North America. The flow of conversation with “Hey Mercedes” will be “more fluid” and be able to understand close-enough driver commands, rather than require specific wording to activate a function. The system will learn and improve its interactivity with each specific owner. And global iterations in software permutations and upgrades will be beamed via over-the-air updates.

On the audio front, Mercedes will equip its vehicles with a Dolby Atmos spatial sound system, which provides a full 3D experience. “It will be like sitting in the middle of your favorite band or orchestra,” Östberg said. The system will allow for a full selection of streaming-audio and -video content.

Why has Mercedes chosen to use an entry-luxury vehicle for a new software launch, rather than a flagship vehicle? It wouldn’t be the first time, as Mercedes launched MBUX in the A-Class platform, including the GLB pictured above. According to UX/UI senior manager Kuhn, those entry-luxury buyers tend to be younger, and thus better at acclimating to a new system – and finding bugs.

Mercedes announced last year that it is hiring an additional 1,000 software engineers to bring MB.OS to life, as well as develop cloud computing and other R&D functions. Why so many new employees?

“We want to own the user interface and APIs, the architecture and integration, because then we own the luxury experience,” Östberg said. “We are owning this responsibility and not outsourcing. If we relinquish data, we relinquish data security.”

This is in contrast to various automakers, including General Motors and Volvo, which are turning to Google and its Android Automotive infotainment suite.

Of course, Mercedes needs software partners to develop apps. But in owning the UI, Mercedes will also own customer’s data. Östberg, who came to Mercedes from automotive supplier Aptiv last August, said Mercedes will observe strict data privacy. If a car changes ownership, Mercedes erases the car’s memory of the previous owner. The data and settings go with the person’s Mercedes Me account, which means certain attributes can be pre-programmed into the next Mercedes a loyal owner acquires.