Take a tour through the updated version of MBUX found inside the new Mercedes-Benz S-Class. We show you all the screens and various features within Mercedes’ latest infotainment system here.

Just like the 2021 Mercedes-Benz S-Class tries to lead the way when it comes to interior luxury, it also aims to be a pioneer in infotainment technology. To accomplish this, Mercedes rolled out a new version of its MBUX software with an also-new screen to go with it.

We’ve had misgivings about MBUX in the past. Most of them revolve around the user interface being difficult to navigate, forcing you to take far too many swipes/steps to execute what might be a simple task in other infotainment systems. Luckily for us, Mercedes attended to this exact complaint with the new version of MBUX. Instead of a revolving door of possible menus to swipe through, the new design takes a one-screen approach by including icons for every possible submenu on the main home screen. Yeehaw!

The new one-screen strategy is made possible thanks to both a new hardware design and, crucially, a new user-interface philosophy. All previous MBUX software played on a widescreen format that showed only three giant icons on its home screen at a time. It looked pretty, but was frustrating to use, as you had to constantly swipe back and forth through the carousel of icons. That’s gone now, replaced by a 12.8-inch portrait-oriented OLED that uses its extra real estate more efficiently. There are eight icons instead of three, which is a more useful and typical number, but because the screen is so large, the new UI doesn’t abandon the previous screen’s aesthetic advantage. Your frequently used options are now staring you directly in the face upon startup in an easy-to-read format, which is just the way it should be.

To our delight, Mercedes didn’t fix what wasn’t broken. If you were familiar with the look and feel of MBUX in other modern Mercedes products, you’ll also be familiar with this infotainment’s finer points. You’ll also be hard pressed to run across a nicer looking interface than MBUX, as it communicates the proper Mercedes feeling of luxury and excess through the pretty graphics and transitions.

Mercedes attempted to retain the physical feel of luxury with a haptic response to your screen inputs, too. It’s relatively weak haptic feedback, but it does improve the experience over a screen without it. Just like we mentioned in our full S-Class interior review, many of Mercedes’ top-notch buttons and switches are deeply missed here. The touchscreen climate controls are easy to use on the MBUX screen, but they offer none of the charm or feel we’re accustomed to from Mercedes’ traditionally great switchgear.

What we get instead are gadgets and gizmos aplenty. Seriously, you’re probably going to be discovering new features and capabilities within this infotainment system for months, if not years, after you buy the car. 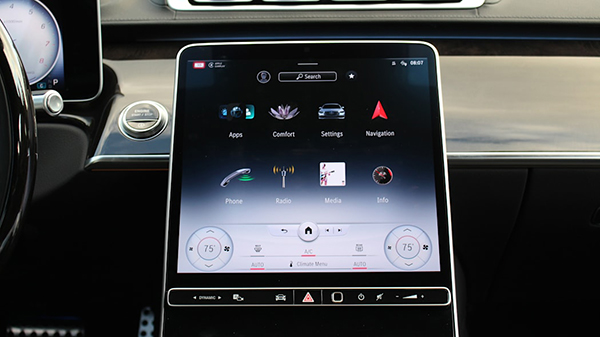 Even if you’ve disliked voice controls in previous cars, you’ll want to give Mercedes’ voice assistant a go. It’s even more capable in this latest version of MBUX, expanding its ability to understand context and have a dialogue in the car. You can ask it about buildings in your area (the car understands where it is), random general knowledge questions, and it’ll even provide examples of animal noises if you want it to. Basically, the system is getting closer to Apple’s Siri or Google’s Assistant with each passing year. Riders in the backseat will have just as much control and access to the car’s settings via voice control, too, since many S-Class owners actually ride in the backseat.

Speaking of the back, if you option the rear seat entertainment package, Mercedes adds 11.6-inch touchscreen tablets to the rear of the front headrests and a 7-inch tablet in between the seats. From here, you can control any aspect of the car you’d like.

Another neat innovation is found in the S-Class’ instrument cluster, which is an extension of the infotainment system with a multitude of customizable screens to cycle through. Mercedes implemented 3D display technology that makes the screen appear as though it is physically popping out at you like you’d experience in a 3D movie (Genesis has something similar). Using specially designed cameras, the car will track your face and constantly adjust the display to make it appear 3D without you needing glasses to make it work. We found it to be slightly distracting at first, but quickly became accustomed to the technology. It doesn’t quantifiably improve your life over a standard digital screen, but it sure is cool, and you can turn the 3D mode off if you want a normal screen experience. Where you might see improved performance is from the advanced cameras’ other uses. For example, Mercedes uses these cameras as part of its biometric authentication system (face-recognition tech) and for improved drowsiness detection to make sure you’re not falling asleep at the wheel.

The last bit of tech that is sure to blow your mind upon trying out this latest MBUX variant are Mercedes’ new augmented reality capabilities. Use the in-car navigation system, and as you approach a turn/merge, a live camera feed pops up in the infotainment system with arrows overlaid on the road telling you where to go. This part is just like Cadillac’s new AR navigation. However, Mercedes takes it a step further by also applying AR to the gigantic head-up display. No need to take your eyes off the road for a second, because both distances and arrows are “projected” onto the road in front of you to communicate where the turn is. It’s undoubtedly the most luxurious and high-tech navigation system we’ve ever experienced. This feature sounds far more useful on tight city streets with turns near each other where a traditional navigation system might cause some confusion as to exactly which turn to take.

Of course, Mercedes provides some of the basics we want in an infotainment system with the latest MBUX, too. You get wireless Apple CarPlay and Android Auto. The smartphone interface takes up the entire screen space that isn’t used by the climate controls, too, so you’re maximizing the usefulness of said features. Mercedes does not accommodate for those who like to be able to split the screen to have CarPlay/Android Auto on one part and audio controls on the other. With the climate controls always living at the bottom of the screen, splitting it would make for some relatively tiny tiles for both the phone projection and radio controls, even with the screen being as big as it is.

By and large, we have few complaints with the new MBUX software. It fixes the worst problems of before, and while some menus can still be rather maze-like, the system is much more usable. This gives us hope that the new C-Class — and other future Mercedes products — with a sized-down version of the S-Class infotainment system will make us just as happy.