It’s been a few months since the last time our spy photographers captured the refreshed Mercedes-Benz GLB-Class out testing. The crossover is undergoing its mid-cycle refresh and receiving minor styling updates, and a new video shows the automaker continuing to prep the vehicle.

The short video captures the crossover sitting at a stop light. The automaker has covered the front fascias with tight-fitting camouflage, leaving little to the imagination. The headlights look like they have the same shape, but Mercedes should redesign the LED daytime running lights, giving the crossover a new lighting signature. The GLB will likely receive a new front bumper design and other minor styling tweaks, and the new one will look a lot like the current car.

There are even fewer changes at the rear, which are visible once the crossover pulls away from the light. A thin strip of camouflage hides the taillights and the gap between them, suggesting that Mercedes has plans to tweak the graphics. However, the company isn’t changing much of anything else.

While our spy photographers haven’t been able to catch a peek at the cabin, we don’t expect any significant changes. The GLB went on sale for the 2020 model year with a dual-screen display sitting on the dash, and the revamped crossover should arrive with the same setup. Mercedes should install its latest MBUX software. It could also make a few other trim tweaks. 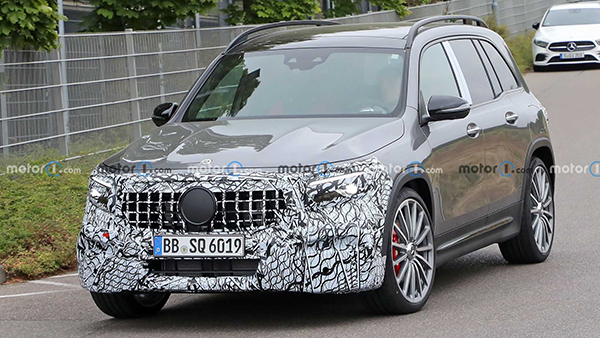 Mercedes offers the GLB in the US with a turbocharged 2.0-liter engine, making 221 horsepower (164 kilowatts) and 258 pound-feet (349 Newton-meters) of torque. The company is unlikely to make any significant powertrain changes, with the current engine essentially carrying over to the new model unchanged.

The automaker will again offer the AMG GLB 35, which our spy photographers captured in September for the first time, a month after spotting the regular model in public. The AMG variant also uses a turbo 2.0-liter, but it makes 302 hp (225 kW) and 295 lb-ft (400 Nm) of torque, rocketing the crossover to 60 miles per hour (96 kilometers per hour) in 5.1 seconds. Expect to find it in the redesigned variant.

The revamped Mercedes-Benz GLB should debut sometime soon. The relatively new model is receiving small revision that shouldn’t take too long to ready for production.