Mercedes-Benz GLB. Powerful proportions with short overhangs and off-road-oriented design as well as optional 4MATIC all-wheel drive and a special off-road light which helps detect obstacles immediately in front of the vehicle at low speeds – the new Mercedes-Benz GLB is a versatile SUV. And a spacious family car: on request it is the first Mercedes-Benz in this segment available as a seven-seater. The two seats in row three can be used by people up to 1.68 metres in height. With powerful and efficient four-cylinder engines, current driving assistance systems with cooperative support for the driver, the intuitively operable infotainment system MBUX plus the comprehensive convenience control ENERGIZING Comfort, the new family member (length/width/height: 4634/1834/1658 millimetres) has all the strengths of the current compact-class generation from Mercedes-Benz. 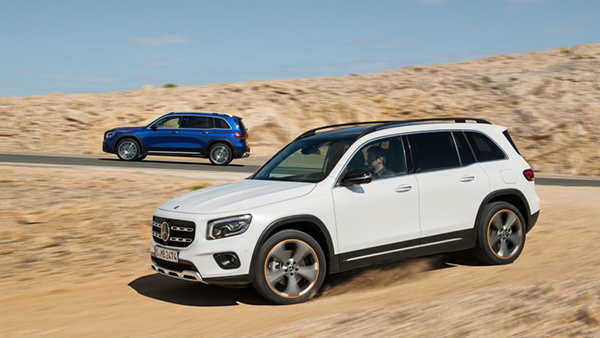 At 2829 millimetres the GLB has ten centimetres more wheelbase than, for example, the new B-Class. Together with the function-oriented greenhouse this is decisive when it comes to the generous amount of space. The headroom in the first seat row is 1035 millimetres – a best in this segment. At 967 millimetres the effective legroom in the rear of the five-seater is at an especially comfortable level.

The load compartment capacity of 560 to 1755 litres (figures for the five-seater) boasts the qualities of an estate. On request the second seat row can be longitudinally adjusted and as standard the inclination of the backrests is adjustable in several stages. This enables the load compartment to be enlarged by up to 179 litres and put to versatile use. 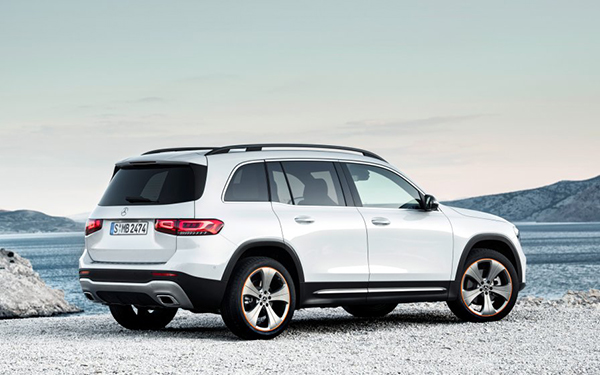 Success story: the eighth model in the compact car family
The new GLB is manufactured at the Aguascalientes (Mexico) plant and, for the Chinese market, in Beijing. The GLB will be coming to the German sales partners at the end of this year.

One in three Mercedes-Benz cars is now an SUV, and one in four a compact model. A compact SUV like the GLB therefore combines all the success factors of the company’s highest-volume segments.

With the new GLB the compact car family from Mercedes-Benz now consists of eight models: the A-Class, A-Class Saloon and long-wheelbase A-Class Saloon, B-Class, CLA Coupé, CLA Shooting Brake and the GLA are already on the market. In 2018 over 609,000 customers all over the world were able to take delivery of a compact model. Since the A-Class was launched in 1997, over 6.5 million vehicles from this segment have been sold worldwide by Mercedes-Benz. 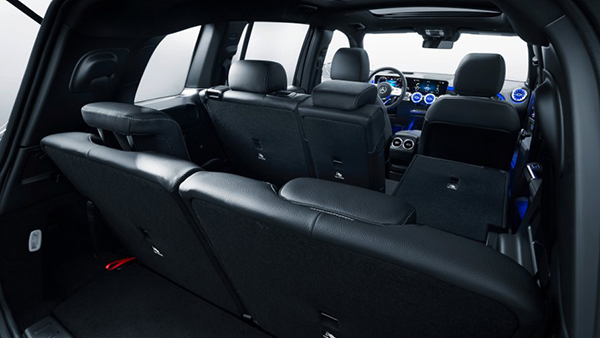 Ready for boarding: up to seven seats
The GLB is the first compact vehicle from Mercedes-Benz to offer a third seat row on request with two additional individual seats. The seats offer people up to a height of 1.68 metres a comfortable amount of space. The extensive safety equipment includes retractable head restraints, seat belts with belt tensioners, a side window airbag which also protects the passengers in the third seat row plus ISOFIX and TOP-Tether anchorages for suitable child seats. These can be used to attach up to four child seats in the rear.

Off-road orientation: the exterior design
The powerful proportions of the Mercedes-Benz GLB underscore the design with its off-road orientation: the surfaces of the forms are emphasised, and reduced lines and precise seams are major features. The upright front section with its striking headlamps is clear evidence of off-road genes, as are the short overhangs at the front and rear.

The muscular and sensuously contoured vehicle shoulder dominates the side view at the height of the C-pillar, an effect reinforced by the rising waistline. The doors reach over the side bar, improving ease of access, and keep the door apertures free of soiling as well as increasing protection in a side impact. All-round protective claddings divide the overall proportions and emphasise the vehicle’s off-road character, as does the simulated underride guard at the front and rear. 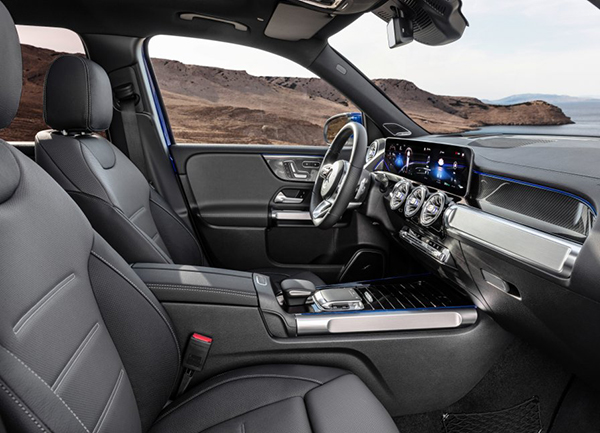 With aluminium details: the interior design
The instrument panel consists of a single piece, which has optical cut-outs in the driver and front passenger area. The driver faces a widescreen cockpit, with control and display via MBUX (Mercedes-Benz User Experience). A new feature is the characteristic off-road tubular element in an aluminium look which rounds off the lower section of the instrument panel and houses the three round centre air vents. These give the dashboard support an impression of robustness, power and a certain fun factor. Below the nozzles is the air conditioning control panel, whose buttons create the impression that they have been milled from a solid aluminium cylinder.

The robust character of the interior continues in the centre console. Tubular elements in a machined look lend solidity to the design of the components and controls. Along the doors, the SUV character is underlined by the horizontal grab handle that, from the design and equipment line Progressive upwards, forms a robust part of the door panel structure and resembles a machined aluminium tube. 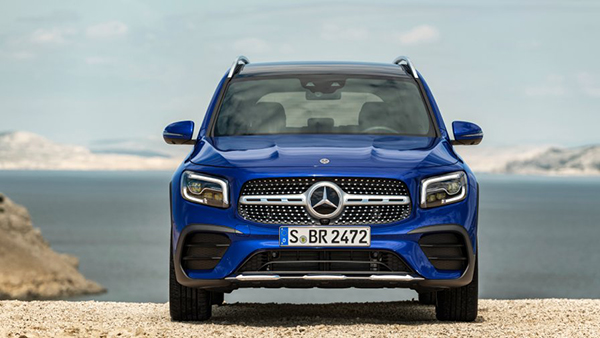 Spot on for hill and dale: the off-road light function
The LED High Performance headlamps and MULTIBEAM LED headlamps are available for the Mercedes-Benz GLB on request. The latter allow extremely quick and precise, electronically controlled adjustment of the headlamps to suit the current traffic situation.

As an option there are also front fog lamps with LED technology. They distribute the light more widely than the main headlamps and thus illuminate peripheral areas better. Their low position in the front bumper helps reduce the risk of dazzling.

4MATIC models include the Off-Road Engineering Package. In combination with MULTIBEAM LED headlamps these models offer a special off-road light function. This makes it easier to see obstacles in rough terrain in the dark. With the off-road light the cornering light on the MULTIBEAM LED headlamps is continuously switched on up to a speed of 50 km/h. This results in wide and bright light distribution immediately in front of the vehicle. 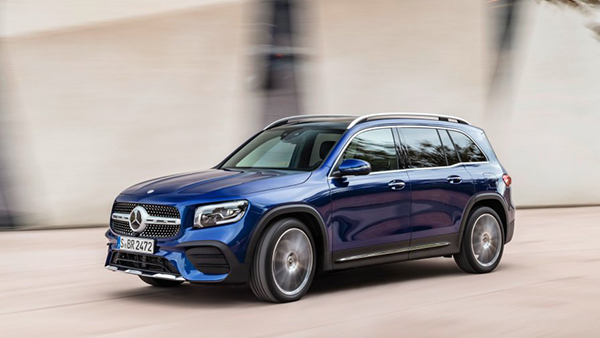 From A for Assistance to W for Wearable linking: the technical details
The GLB benefits from the technical highlights of the current compact-class generation from Mercedes-Benz. These include in particular:
– The four-cylinder petrol and diesel engines, which were completely updated to relaunch the compact model series: Compared to the previous generation, the excel with considerably increased specific outputs, improved efficiency and lower emissions.
– The driving assistance systems with cooperative support for the driver and functionality from the S-Class: thanks to improved camera and radar systems, the GLB can look up to 500 m ahead and can drive partially autonomously in certain situations, for example by conveniently adapting the speed before corners, crossroads or roundabouts using the Active Distance Assist DISTRONIC with recourse to maps and navigation data. As a new function of the Active Steering Assist, among other things, there is also the intuitive Active Lange Change Assist. If the Active Parking Assist with PARKTRONIC is additionally on board, the GLB also has the function extended automatic restart on motorways.
– The comfort suspension: at the front the GLB has McPherson suspension struts, at the rear an acoustically and vibrationally decoupled multi-link axle with compression springs. Adaptive adjustable damping is available on request. With this the driver can change between more comfort or particularly sporty tuning via the DYNAMIC SELECT switch.
– The intuitively operated infotainment system MBUX (Mercedes-Benz User Experience): The powerful computer, brilliant screens and graphics, individualisable depiction, all-colour head-up display, navigation with augmented reality, learning-capable software and the voice control which can be activated with “Hey Mercedes” are the key advantages of the system.
– The ENERGIZING comfort control: it networks various comfort systems in the vehicle, and uses musical and lighting moods plus a number of massages for a wide range of feel-good programs. The ENERGIZING COACH recommends these programs according to the situation. If the Mercedes-Benz vivoactive® 3 smartwatch or another compatible Garmin® wearable is linked, personal values such as stress level or sleep quality improve the precision of the recommendation.

Should a tad more traction be called for: the 4MATIC all-wheel drive
On request the Mercedes-Benz GLB is equipped with the permanent all-wheel system 4MATIC, with fully-variable torque distribution. This sporty all-wheel drive configuration allows the driver to use the DYNAMIC SELECT switch to influence the characteristics of 4MATIC. Three characteristic maps are available to control the all-wheel drive clutch, though the system responds flexibly to the current driving situation in any mode. In regular driving operation, the drive program “Eco/Comfort” is based on an 80:20 distribution (front axle:rear axle), while in “Sport” it is 70:30. In off-road mode the all-wheel drive clutch acts as an inter-axle differential lock, with the basic distribution a balanced 50:50.

4MATIC components include the power take-off to the rear axle, which is integrated into the automated dual clutch transmission, and the rear axle differential with an integrated multiplate clutch. This is electro-mechanically operated. Via a crown wheel and a ball ramp, an electric motor exerts an axial force on the clutch pack to open or close the plates. The rear axle differential compensates the different paths/rotational speeds of the rear wheels. The advantages of this control system are above all non-rpm-dependent operation across the entire actuation range, pilot control of the clutch while still stationary and higher efficiency thanks to the ball ramp concept.

Useful in easy off-road terrain: the Off-Road Engineering Package
In addition to off-road light, the Offroad Engineering package has an additional driving mode. It adapts the engine’s power delivery and the ABS control to easy off-road terrain away from tarmac roads. It can be activated via the DYNAMIC SELECT switch.
Other elements of the Off-Road Engineering Package:
– An animation of the driving situation can be called up in the media display. The realistic presentation of gradient, inclination angle and technical settings helps the driver to judge manoeuvres correctly.
– The hill-start assistance system Downhill Speed Regulation (DSR) automatically adheres to a preselected, slow speed between approx. 2 and 18 km/h, it can be read out in the instrument cluster and in the optional head-up display. With targeted brake applications the assistant helps retain control during steep downhill driving.

Powerful and efficient: the engines
The new Mercedes-Benz GLB places its trust in the four-cylinder petrol and diesel engines which were completely updated to relaunch the compact model series. In comparison to the previous generation, they are characterised by significantly increased power, improved efficiency and emissions.

The gateway to the petrol-model range is the M 282 with a displacement of 1.33 litres in the GLB 200. This engine has cylinder shutoff for efficient operation in the partial-load range.

The two-litre M 260 engine in the GLB 250 4MATIC has cast-iron cylinder liners in its engine block of diecast aluminium, widening at the lower end as per the CONICSHAPE® principle. In-house the cylinder bore process is descriptively known as “trumpet-honing”. This minimises piston friction and cuts consumption. In the aluminium four-valve cylinder head, the CAMTRONIC variable valve timing system allows two-stage adjustment of the valve lift on the intake side.

Thanks to further extended exhaust gas aftertreatment the two-litre diesel (OM 654q) in the GLB 200 d/GLB 220 d with the 8G-DCT dual-clutch transmission already meets the RDE (Real Driving Emissions) level 2 not obligatory until 2020 and is certified in accordance with Euro 6d.