Testing exciting SUVs is usually not in the job description of a Miss Germany. But Leonie von Hase grew up driving all-wheel cars on her family farm in Namibia. So we asked her to take a spin in the new GLB – and thanks to the immersive 360° view, you can come right along and be part of the action. Jump into the passenger seat and enjoy a full view of the GLB’s spaciousness and its off-road capabilities.

Considering her background, though, her enjoying the GLB-Class more than the hot hatch from Wolfsburg makes plenty of sense. That’s because Leonie was born in Namibia, meaning she’s been familiarized with off-road adventures since she was little.

However, we doubt the vehicles her parents drove back then (Leoni was born in 1984) had a lot in common with the GLB-Class. They were most likely Toyota Land Cruisers or perhaps Land Rover Defenders, classic off-roaders that relied on pure mechanicals to get their occupants to their destination. Meanwhile, the GLB is a rather small SUV (though it can seat up to seven) full of modern technology that, in all honesty, feels a lot more at home on pavement than anywhere else.

While that may be true, it doesn’t mean the GLB is completely lost without the comfort of firm asphalt under its wheels. Like most modern SUVs, it can put a shift off-road when required, provided you don’t ask too much of its all-wheel-drive system or its limited ground clearance and angles. 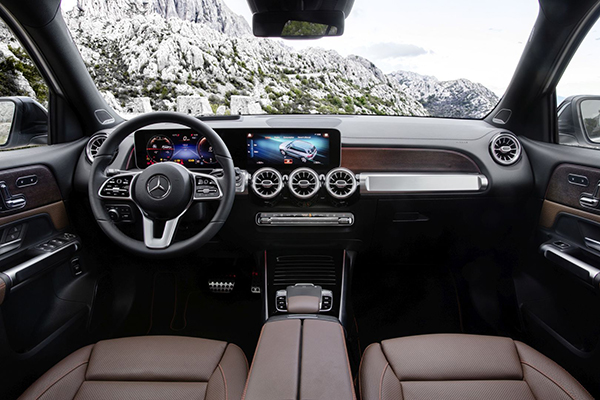 The GLB may not offer anything spectacular in the way of its off-road abilities, but at least visually, it comes as a breath of fresh air in Mercedes-Benz’s lineup. The exterior design is a little chunkier than the rest of the manufacturer’s SUV, with the obvious exception of the G-Class. The GLB does feel a bit like the spiritual successor of the GLK (actually replaced by the GLC), which in turn claimed to have some design cues the mighty G-Wagen, so there is a loose connection between the two.

The 360-degrees clip featuring Leonie doesn’t even come close to testing the vehicle’s limits (as low as they might be), but it does make Miss Germany seem like a very pleasant and capable car reviewer. Too bad the 2021 Miss Germany should happen pretty soon (though it might get postponed considering the you-know-what), which means Leonie will lose her status. Well, if she didn’t already have a successful business, she now knows there is always the option to become a YouTube car reviewer.