Last time, we saw the Mercedes-Benz GLA together with the facelifted models of the A-Class, B-Class, and CLA. Recently, the crossover SUV was once again caught on cam while waiting for the green light at the intersection.

The level of camouflage found in the test car remains the same as the one found in the older spy shots. However, this unit comes in a gloss black finish instead of the white we have been seeing lately.

If the camo-covered areas are an indication, there should be major updates on the front grille, front bumper, and lights. Starting with the fascia of the auto, it appears that the shape of its front grille has been revised to mirror the panel found on its fully-electric relative known as the Mercedes-Benz EQA. Meanwhile, the dent on each side of the bumper wrapping hints at the location of air intakes. Lastly, the peeking headlamps look larger than the present model and the lining on the liftgate suggests a thin LED light going across it, which also bridges the tail lights. 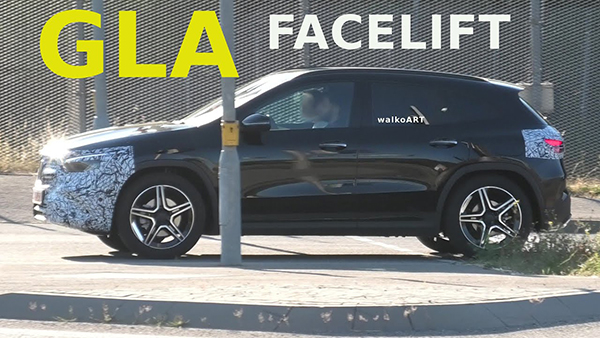 Although not shown in the video, we expect the interior of the upcoming GLA to get major updates, especially in its infotainment system and displays. Again, the most likely scenario is that it will copy the layout of the EQA. As for the powertrains, the facelifted model will probably retain its existing offerings.

The facelifted Mercedes-Benz GLA is anticipated to arrive at the end of the year or early next year.