I AM BACK with the Mercedes-Benz G-Class on our YouTube Channel in G500 G-Class China Blue & Hyacinth Red! In this video, we will be having a walkaround showing you the Extreme Off Road Driving Situations of the Mercedes Benz G-Class G400d!

The Mercedes-Benz G-Class gets a lot of flack by association because so many owners use them exclusively as shopping mall chariots and never take them off pavement unless they have to park in the grass for a music festival. Of course, there are some G-Wagen owners who would love to get them dirty, but they may live too far away from public land where they can (legally) get a little mud on their tires. It’s a shame because the G-Class can do all of the things that the diesel G400d in this video does.

YouTuber Mr. Benz (aka Ben) goes to the one place on Earth where it’s guaranteed that you can drive the Benz strongbox the way it was made to be driven: the G-Class Experience Center in Graz, Austria. He climbs into the shotgun seat and a professional driver named Sven proceeds to drive through, over and around every obstacle in the G400d’s path.

Sven starts off by cooling the G off in a deep bath. In fact, it’s almost too deep because it triggers a warning buzzer in the cabin that indicates the water level is reaching the Teutonic tank’s maximum wading depth. 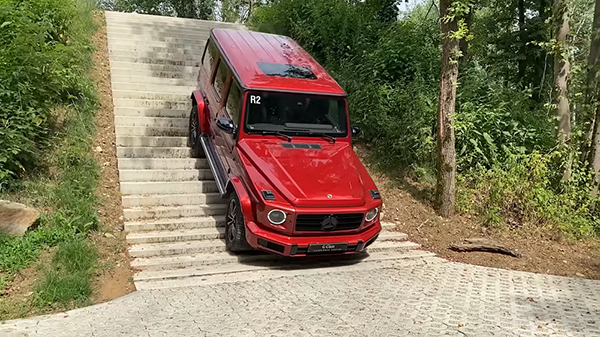 Sven dries off the most badass company car in the world – one wheel and tire at a time – by locking its rear and center differentials and driving it over a series of moguls that turn the four-wheeled marvel into a ludicrously expensive tripod.

The next section keeps all of the G-Class’s tires on the ground, but puts Mr. Benz on pins and needles. Sven takes on steep lateral angles that only leave small margins of the vehicle’s 35-degree limit in reserve. Mr. Benz tells his fearless escort, “It feels so weird. I feel like … literally falling out the car.” 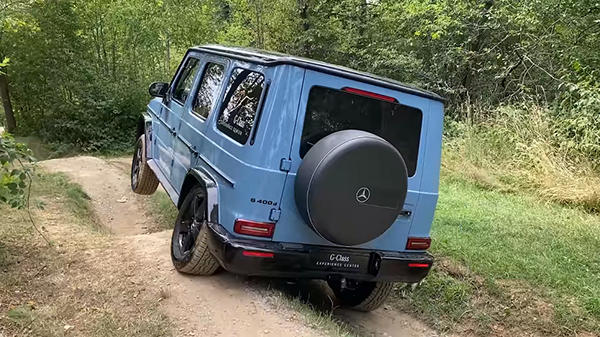 It’s not long before Mr. Benz gets that same sensation from a different direction. After splashing through a mud bog, Sven points the blunt nose of a different G-Wagen at the entrance to the Iron Schöckl and takes Mr. Benz up an eye-widening 100-percent grade. In other words, a perfect 45-degree angle. But it’s just another day at the office for Sven and his work vehicle. “G-Class is always ready.” It makes the climb without a whisper of wheel slip.

The descent down a flight of concrete stairs is much noisier, but once again devoid of tire squeal. The final climb up an 80-percent grade is almost anti-climactic compared to the earlier ascent, but the way down reveals something important. Mr. Benz taps the passenger-side grab handle in front of him and tells the casual daredevil in the driver’s seat, “Now I know why we have this in the G-Class.”

Was this all done on a specially designed course meant to show the G-Wagen’s abilities in the most flattering light possible? Yes. But no test gauntlet, no matter how one-sidedly engineered, can add degrees of flex to a suspension or grip to tires that isn’t already there. And you certainly can’t pick those things up in a high-end department store.