I’m taking 7x F1 World Champion Sir Lewis Hamilton on a tour in Dubai where I question him on some of the most impossible questions.

Seven-time World Champion Lewis Hamilton will compete over the weekend in the last race of the 2022 Formula One season. But ahead of the Abu Dhabi Grand Prix, he had time to skydive and hang out with Supercar Blondie in a Mercedes-AMG G-Wagen.

It hasn’t been an easy season for Lewis Hamilton. The 2022 season seems to be the seven-time World Champion’s only season without a win, but he still managed to score fifth place in the championship.

Ahead of the last race of the season, at the Yas Marina Circuit in Abu Dhabi, Lewis Hamilton had time to go skydiving and ride around with Alex from Supercar Blondie.

The two had a chill conversation while they drove in a Mercedes-AMG G 63, with Lewis talking about different things, including his dislike of driving in real life, his insane traveling schedule (around 320 days a year), or his dog, Roscoe. 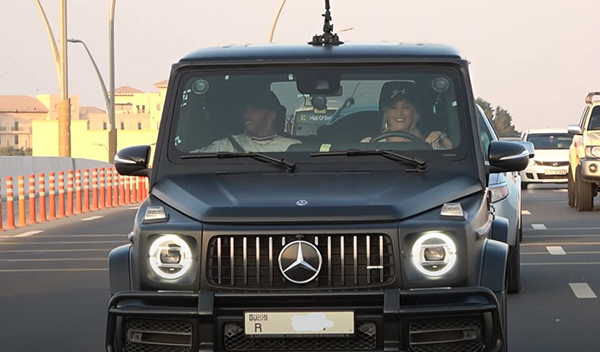 The two also had a fun game of Would You Rather, with Lewis answering questions ranging from an ability to see into the future, whether he’d prefer being the funniest or smartest person in the room, and whether he’d like to have fingers as long as his legs or legs as long as his fingers. Which neither are good for driving.

Since Hamilton is a big fan of jewelry, he was wearing an IWC watch, and the model seems to be the Big Pilot’s Watch Perpetual Calendar, which features a stainless-steel case, a diameter of 46.2 mm, with a height of 15.4 mm. The case is water resistant up to 6 bar and has a see-through sapphire glass back. It’s automatic and self-winding, with a power reserve of up to 168 hours, with 381 components and 54 jewels.

The Mercedes-AMG Petronas driver didn’t take the wheel as he and Alex drove around in a Mercedes-AMG G 63, a powerful and popular choice. The G-Wagen comes with a 4.0-liter twin-turbo V8 engine, rated at 577 horsepower (585 ps), with a top speed of 137 mph (220 kph). But it’s nowhere near as fast as Lewis Hamilton will be in his W13 at the Abu Dhabi Grand Prix.