Drake sees the new year as a new opportunity to remind everyone that he’s the GOAT (greatest of all time). And he does that with inspirational posts on social media about “making it,” while casually flexing his wealth with an expensive watch, plane, or, in this case, a luxurious Mercedes-AMG G 63. 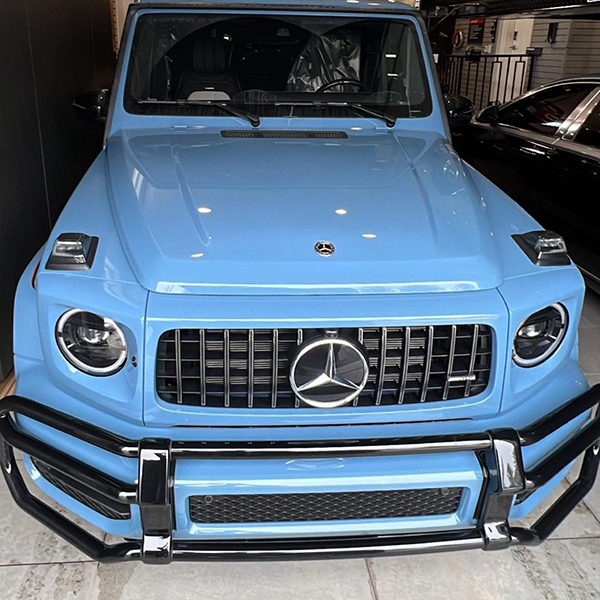 Drake finished 2021 with a net worth of around $180 million and started the year in St. Barts, Caribbean, where he partied with Leonardo DiCaprio and many other billionaires on expensive yachts. He returned home on a high, remembering all that wealth, and started sharing glimpses of his lavish lifestyle.

Most recently, one of his photo dump sets included an image of him casually wearing a $190,000 Richard Mille watch, the RM 11-03 McLaren Automatic Flyback Chronograph, whose current value sits at over $675,000.

Now, Drake’s recent post is very inspirational, claiming that “There’s a point in the “fake it til you make it theory where you actually gotta make it.” To prove that he did everything to “make it,” the Grammy-winning rapper posted some pictures with his friends, two small bags filled with cash, a mirror selfie, a welcome note at five-star hotel The Setai, and a picture of a baby blue Mercedes-AMG G 63, which you can see as the main photo.

The luxurious offroader is a stamp for every celebrity out there because it’s rugged and capable. Under the hood, the German brand put a 4.0-liter twin-turbocharged V8 engine, which sends power to all wheels via a nine-speed automatic transmission, delivering 577 horsepower (585 ps) and 627 lb-ft (850 Nm). When it comes to speed, the G-Wagen delivers again: it has an acceleration from zero to 62 mph (0-100 kph) in 4.5 seconds and a top speed of 137 mph (220 kph).

Drake’s garage also includes other luxurious vehicles, including a Bugatti Veyron Sang Noir, a Rolls-Royce Cullinan and a Phantom, and a Mercedes-Maybach G 650 Landaulet among many others. So, there’s no question about the fact that the Canadian rapper did his part of “made it.”