Generations of Mercedes E-Class buyers would accept no substitute. If you liked the E-Class way of doing things, none of its competitors came close to the relaxed and reassuringly robust feel of a good Benz. But now, with it becoming increasingly inevitable that almost everyone’s next (or next but one) new car will be electric, the E-Class is not such an obvious choice. There are E-Class hybrids, but they’re not full electric. For the zero-local-emissions equivalent, you need to think EQE. 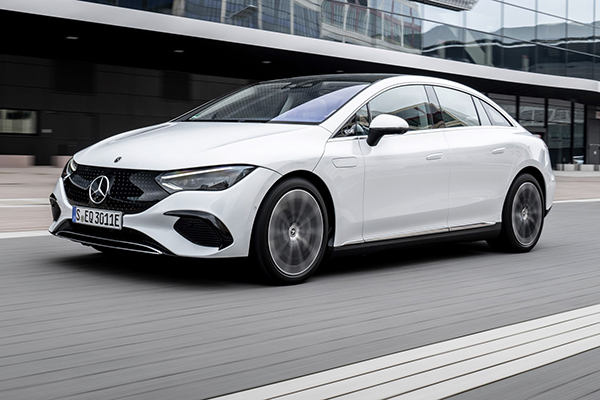 Mercedes already has grabbed the third rail of luxury by turning on the S-Class to electric power; we’ve taken you for a ride in that 2022 Mercedes-Benz EQS and its AMG EQS upgrade.

But what happens now, as it banks its benchmark mid-size sedan into the same EV pocket?

For 2023, the E-Class gets its own electric-car companion in the form of the Mercedes-Benz EQE 350. It sports a similar battery, a single electric motor, a shrunken EQS-like design, and options that include the Hyperscreen control interface and rear-axle steering.

It’ll need them as it takes on rival EVs with more range and quicker acceleration, such as the Tesla Model S and Lucid Air, as well as competitors from its own backyard, including the Audi E-Tron GT and Porsche Taycan. 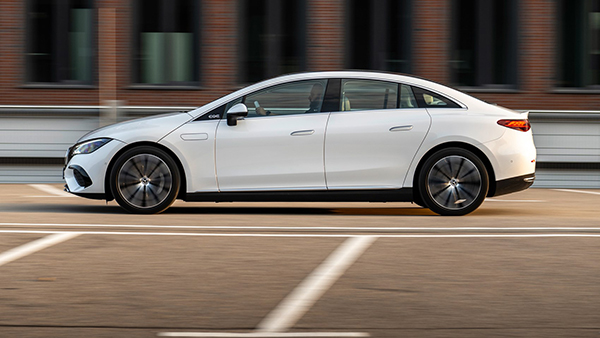 A CLS-sized shape
The EQE breaks no new ground in terms of design. It left the heavy lifting to the EQS, which debuted last year. Inside and out, the EQE looks very similar to the EQS, but the headlights feature different LED daytime running lights that look more E-Class than S-Class. While the EQE still features a cab-forward design with a short hood, short rear deck, and a long cabin, the wheelbase is 3.5 inches shorter than the EQS with an overall length that matches that of today’s CLS-Class. The distinctive black nose band across the front end carries over with an EQE-distinctive treatment, and so does the full-width band of taillights, both EQ hallmarks.

The well-groomed appearance of the EQE has more presence than the EQS because of the slightly abbreviated rear quarters. Still, it’s apparent here as with the EQS that Mercedes penned the cleanest shape it could to extend the car’s usable battery range. It’s a soft and anodyne shape, not nearly as distinctive as the E-Classes of the recent past. Mercedes’ Vision EQXX concept demonstrates how EV range and sensual shapes can co-exist, and underscore that the EQS and EQE are starting points as Mercedes learns how to design longer-range electric cars.

The EQE interior looks like that in the EQS, too, but it’s more dazzling even in default mode. A standard 12.3-inch digital gauge cluster is augmented by a 12.8-inch OLED touchscreen infotainment system. Mercedes’ 56-inch Hyperscreen dashboard—which consists of a single pane of glass, a 17.7-inch touchscreen infotainment system, a 12.3-inch digital gauge cluster, and a 12.3-inch touchscreen for the passenger—is an option. The glorious chaos of Hyperscreen gets muted with the smaller screen setup, but it’s to the EQE’s advantage: it exposes square feet of dash trim that, in our test car, highlighted laser-cut wood with pale-blue checks. Nightclub-like LED lighting comes standard, either way. 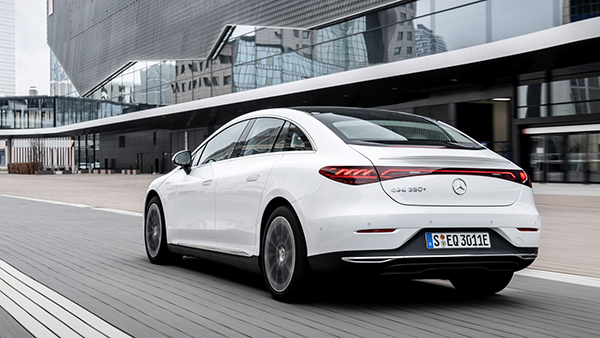 Keeping it in the family
The EQE 350+ sets the initial pace for the U.S. versions of the new mid-size electric sedan, with more powerful models swinging on the on-deck circle.

In the 350+, a 90.6-kwh lithium-ion battery pack powers the single rear motor that produces 288 hp and 391 lb-ft of torque, which goes to the rear wheels through a single-speed transmission. Mercedes said the EQE will run 0-60 mph in 5.6 seconds on its way to an estimated top speed of 130 mph. Compared to the EQS 450+, that’s down about 10 kwh in pack strength, but a few tenths of a second quicker.

Swift and nearly noiseless, the powertrain dupes the driver into forgetting speed limit signs; I’m waiting to see how much the bright speed-camera light that flashed at me on some urban Frankfurt byway will cost. Paddle controls let the EQE slip through a range of regenerative braking modes, including one that adapts with navigation data to adopt the ideal ratio to extend driving range. Flipping through light regen in small German towns for smoothness, kicking into heavy-regen mode for mountain switchbacks, the EQE skimmed through northern Frankfurt suburbs, flung itself around garbage trucks and Fiat minicars in passing zones without fault, and breezed up to 110 mph on the short stretches of autobahn where the slashed white circle on the gauges indicated unlimited speed (though it left no room for a top-end 130-mph clip).

In all forms, the EQE remains mid-pack in pack performance, well off the blistering acceleration and range numbers posted by Lucid and Tesla. But, as we’ve found, those important yardsticks don’t measure the things the EQE can do better. 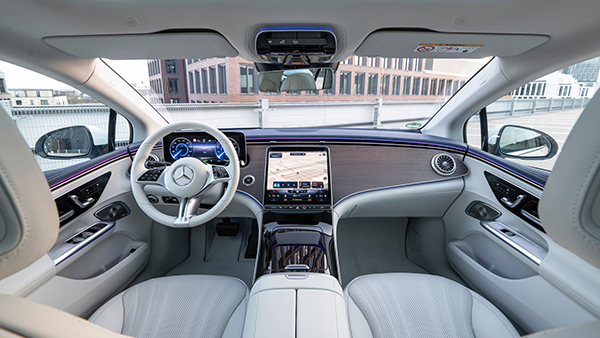 Honed for speed
That list of things can start with ride quality. The EQE doesn’t feel so distant from the EQS in its basic handling parameters, but it is more maneuverable, more firmly sprung, and has more direct and heavier steering than its big hatchback predecessor.

The basics include a four-link front suspension and a multilink rear suspension both derived from the latest S-Class, with an option for an air suspension and adaptive dampers. A choice between rear-axle steering systems offers drivers either 4.5 or up to 10 degrees of steering angle, the latter of which can shrink the turning radius from 41 feet to 35. Base cars will roll on low-resistance 19-inch tires, while 20- and 21-inchers will be available.

Configured with Pirelli P Zero 255/35-21s in front, 285/30-21s in back, and the adaptive suspension, the EQE 350+ unlocks the in-app poise control the EQS can lack. In its Comfort settings, the low center of gravity and light, almost feedback-free steering generates a dreamy ride that leaves lots of wheel travel for scabby pavement—of which Germany has very, very little. It undulates softly and bounds lightly at the front end; with so much weight (in the 5,500-pound range), it snubs off what little road rash it finds in its homeland without much worry.

Flip it into Sport mode, and this EQE 350+ snaps a chalk line for ride control, doing all it can to maintain that horizon line. The damping firms up, the steering loses the vaguely connected quality, but neither render it overly firm or heavy at the wheel. Its extraordinarily stiff body does a lot of the work here, smothering dissent with sheer mass.

That can make the EQE feel like more of a connect-the-dots driving experience on tightly wound roads: pick a point in the distance, press the pedal and hurtle toward it with a little bit of wind noise and a little bit of tire noise, dip into the regen and brakes, let the mass settle into its chosen groove, then twist the steering dial to the next point on its rocket-launch agenda. Driving it, like driving most powerful electric cars, feels something like using autofocus on a professional-grade DSLR—but it’s still a more supple and smooth-riding vehicle than any Tesla or Lucid we’ve driven. 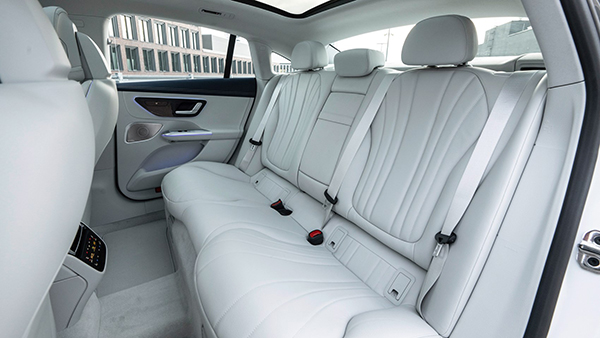 Big pixels, skimpy head room
At 196.6 inches long, 77.2 inches wide, and 59.5 inches high, the EQE lines up against the Tesla Model S, within an inch of those critical measures.

Compared to the larger EQS hatchback, it’s not far off, either, since it rides on the same EVA2 platform. The more striking comparisons come with the gas-powered E-Class: the EQE sits 2.5 inches higher, has 3.5 extra inches of interior room, and sits on a 122.9-inch wheelbase that’s more than seven inches longer than that of the gas-powered E-Class sedan. It’s larger inside, Mercedes says, but it hasn’t produced U.S.-specific interior volumes for a direct comparison.

The EQE’s front seats rival those in any upper-end E-Class, with a great range of adjustment and spicy-hot heating for the steering wheel and seats, if not quite enough lumbar support.

It’s the rear seat that, like that in the EQS, comes up shy on head room. Even under the panoramic roof’s thin fabric shade, a 6-footer will touch that silky material even if they’re slouching on the EQE’s deeply pocketed low bench seat. Knee room is fine, but it would benefit greatly from a more laid-back seat back.

It doesn’t need any advice on stellar trim quality, where Mercedes’ luxury-EV competition falls off and where unlikely badges like Hyundai and Kia mark its real test. The EQE test car provided by Mercedes wore sleek alpine gray paint outside; inside, a blue leather dash cap with contrast stitching set a fabulous tone as paired with laser-etched, blue-studded wood trim and beige leather. It’s as on-point for luxury as Hyundai’s pitch-perfect Ioniq 5 is in its 1980s groove. 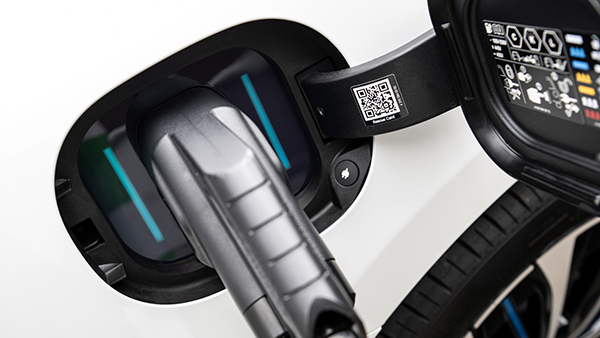 The safety glow-up
Every Mercedes-Benz safety and driver-assistance system will be available on the EQE, ranging from automatic emergency braking and adaptive cruise control to blind-spot monitors and active lane control, and more. It also features car-to-X communication with the ability to communicate with other vehicles about the driving conditions.

There’s so much assistance, the EQE feels more like the vanguard of a truly immersive assisted-driving experience than anything we’ve been in. It helps out with everything, from the automatic stops it performs at traffic lights to the brake hold it releases once the light changes, from cruise control that minds city speed limits with stop-and-go control up to 35 mph. It has active steering assist to stay in the lane’s center, and active lane-change and blind-spot steering assist to ward off approaching cars.

It’s not just in safety that it pitches in, either. The EQE has a welter of environmental assists that have begun to knit the cockpit itself together into a coherent zone where the driver needs fewer buttons to get comfortable behind the wheel. Voice commands can shift the hue of the dash’s pipes of light: “Hey, Mercedes, change the lighting to white,” it hears, and so it is done.

It’s not without execution flaws. The speedometer sits too high on the digital gauge cluster, forcing some tall drivers into selecting a higher steering wheel position than they would otherwise like. The head-up display’s smorgasbord of information can be too bright and can chew up too much of the vision of the road ahead. We only drove the EQE with the lesser setup, but as we’ve found in the EQS, the Hyperscreen environment can be a bit like riding in a pachinko machine, with its constant barrage of colorful, gamer-style information.

Fine, but how much does it cost?
Mercedes hasn’t released prices yet, but the EQE 350+ will come with a 12.8-inch central touchscreen with navigation and wireless Apple CarPlay and Android Auto; wireless smartphone charging; an automatic charging-port door; heated and cooled front seats; synthetic leather upholstery; Burmester sound and satellite radio; ambient lighting; a panoramic sunroof; and 19-inch wheels.

Options will range from the Hyperscreen environment with its three-screen displays under glass; an air suspension; a surround-view camera system; augmented-reality navigation; a fragrance dispenser; a head-up display; a heated steering wheel and heated rear seats; AMG Line trim; and the two rear-axle steering options.

From our first drive of the EQE 350+, it’s clear that differentiation will be the key with battery-powered cars. The EQS has a more slippery hatchback body, a slightly more genteel driving disposition, and more standard gear. Pared of some weight and length, but still equipped with most of the most forward-thinking technology, the lower-priced EQE—how does $70,000 sound?—may strike many drivers as a better step into their own electric future.