So far this year, Mercedes has revealed the E-Class sedan and coupe, and next week it’ll show off the E-Class coupe and cabriolet. It’s happening on May 27 if you wanted to put it in your calendar. Or you can look at the E-Class sedan and wagon to get a solid sense of what to expect. However, Mercedes continues to detail the two two-door models. The latest is a short video that show’s off the company’s new capacitive steering wheel in detail. 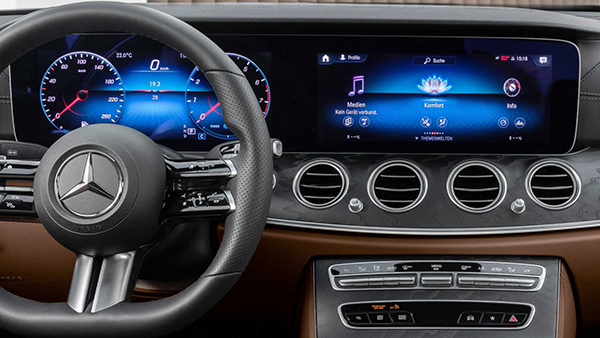 The system works with a sensor mat located under the steering wheel’s surface material – leather or wood – which has one sensor surface on the front of the wheel and one on the back. Gripping the steering wheel causes the sensors to register a change in capacitance. If the driver doesn’t grasp the wheel hard enough, then the system won’t register a touch, and, after a certain period, the car initiates a warning sequence. If the driver fails to respond, the car activates its Emergency Stop Assist.

Mercedes is also showing off the wheel’s new design, which will feature two double-decker spokes finished in high-gloss black with Silver Shadow finish on the rim. Other interior changes will be kept to a minimum. The dual-screen infotainment/digital instrument cluster screen carries over, though Mercedes replaces the old COMAND system with MBUX. We’ll get the full reveal, with all the details, next Wednesday, but don’t be surprised if it sounds familiar.