The C-Class is a bread-and-butter machine for Mercedes-Benz. We’ve seen prototypes of the next-gen W206 model testing on public roads for some time now, and despite the global Coronavirus pandemic, that testing continues. A recent sighting catches a test vehicle with a bit of camouflage peeled off the front fascia, giving us a clearer look at the bumper and headlight design for the forthcoming BMW 3 Series competitor.

Much is still covered, but the lower fascia appears to adopt a smoother design with a faux gray “vent” insert spanning the entire length of the chin. The headlights appear sharper and narrower compared to what we see on the updated E-Class, matching up better with the current A-Class. False panels are still obscuring the hood, but we can obviously tell the overall C-Class shape isn’t changing.

This appears to be a standard model as opposed to something with ties to AMG; we don’t see the typical slotted camo cover used to hide the Panamericana grille, and there are no visible exhaust cutouts at the rear. For that matter, this prototype is running placeholder taillights, suggesting it might be an earlier prototype. We’ve had other sightings with cars using production lenses, albeit still concealed with camouflage. 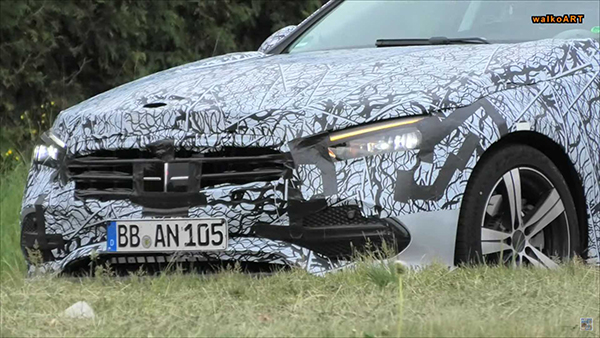 As far as engine options, four- and six-cylinder power is expected. Plug-in hybrid variants are also a virtual guarantee, as it will riding on a revised version of the automaker’s MRA platform. To the best of our knowledge, the range-topping C63 AMG will still offer a V8 punch. You can also expect these powertrains to be complemented with a range of driver-assist technologies.

Though prototype testing continues, it’s possible Coronavirus could delay the sedan’s big debut. We originally expected to see it later this year as a 2021 model during the Paris Motor Show. That show has been canceled, but a special Mercedes-organized livestream reveal could still take place during that time frame.