The fifth generation Mercedes C-Class 2021 marks a significant progress and will take over the MRA II platform and the second generation MBUX system with portrait screen from the new S-Class. The Plug-In Hybrid version will have a range of 100 km. And AMG? Goodbye V8 for a 4-cylinder Plug-In. 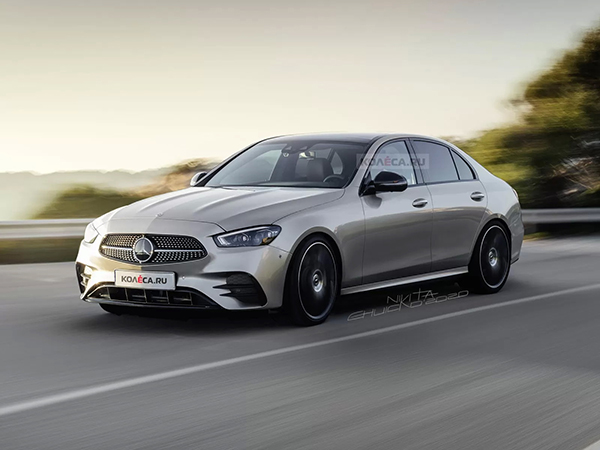 For Mercedes, the C-Class is the main pillar of the range. The best-selling Mercedes model of all time, which since 2013 has exceeded 10 million copies (we also took into account 190) is produced on all continents, in Germany, USA, China, India, Brazil, South Africa, Indonesia, Malaysia and Thailand. That is why replacing the C-Class it is a crucial task. If in football there is a saying that says “never change the winning team”, in this case it is an exact opposite approach.

Ola Kallenius, Daimler’s first non-German boss, explained very clearly: “Until now, the logic was very clear. New technologies introduced in the S-Class and this happen every 7-8 years were then gradually transferred to the lower classes. We have already given up this philosophy in recent years. The new strategy is that each important new architecture or model will receive new technologies. ” 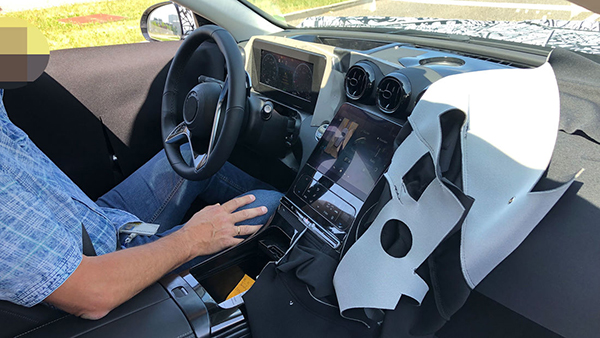 Fully digital dashboard
The current generation W205 was launched in 2014, 4 years before the appearance of the MBUX system in April 2018 in the fourth generation Class A. The floating tablet with a format closer to 4: 3 than 16: 9 is outdated today even if the facelift in 2018 screen proportions have changed. In addition, the floating tablet above the vents does not allow the central insert in the dashboard to be made of wood but only of aluminum look due to the complicated shape.

Mercedes recognized this and even if you order wooden inserts on the center console, in the central area of the dashboard you always have thealuminium look element. A technological necessity that led to a stylistic mistake.

But all these things are a thing of the past. As the first spy photos of the interior showed, the new C-Class will receive the second-generation MBUX system with the portrait display that covers almost the entire center console and will probably have a diagonal of 11.9 or optionally 12.8 inches like in thge new S-Class. In the top 12.8-inch version, the screen will be OLED and can be combined with a 3D display for instrument cluster with camera for face recognition. There will also be a new, larger head-up display and augmented reality with the image appearing virtually at a distance of 10 meters. The display area corresponds to a 77-inch diagonal monitor. At the same time, the MBUX system will be smarter, being able to learn and interact by activating online services and being able to be activated without the phrase Hey Mercedes.

The new Mercedes C-Class 2021 will be built on the MRA II platform, introduced in the new S-Class. This architecture represents an evolution of the MRA, the first longitudinal modular platform from Mercedes that debuted on the C-Class in 2014. It introduced the new multilink front axle with four arms that greatly attenuated understeer behavior. The evolution of the MRA II comes with the integral steering, a suspension with several aluminum elements and the option of the sophisticated E-Active Body Control suspension.

Given that in the currently C-Class less than 10% of customers have opted for air suspension, we believe that the E-Active Body Control suspension will not be offered in Class C. And the level 3 autonomous driving system that will be available at Mercedes S-Class in the summer of 2021 is too expensive for the C-Class.

Electrification on the whole line
The range of engines will also undergo major changes, with Mercedes substantially intensifying the electrification program. In the diesel field, the 2-liter OM 654 engine will be upgraded. The displacement will increase slightly from 1,950 cc to 1,993 cc and the injection pressure will increase from 2,500 to 2,700 bar. All 2 liter diesel versions will have two turbos mounted in series for better response and water cooling for better thermal stability. The steel pistons will have a sodium cooling circuit and the air conditioning compressor will be electric and driven independently of the engine.

The original 1.6-liter Renault diesel engine will disappear from the C 180 d and will be replaced by a more deflated version, about 120 HP, of the modified 2-liter Mercedes OM 654 engine. C 200 d and C 220 d will then follow with the same upgraded 2-liter diesel engine. The C 300 d will receive for the first time an electrified version of the former 2-liter bi-turbo diesel with 245 HP. This is the first diesel from Mercedes to have an integrated starter alternator (ISG) combined with a 48V network.

The starter-alternator is integrated for the first time in the transmission and not in the engine so it can be easily combined with various engines. It delivers 20 HP and 180 Nm right from the start, the maximum power being 265 HP, 20 HP more than the former 2-liter bi-turbo diesel engine and 245 HP. The engine torque also increased by 50 Nm from 500 to 550 Nm.

The OM 656 6-cylinder 3-liter diesel engine will not be found under the hood of the future C-Class.

The petrol range starts with the C 180, equipped with a 1.5-liter turbo of 156 HP, followed by the C 200 mild hybrid (1.5-liter 184 HP engine and integrated starter generator of 14 HP). For the first time, the M 254 engine will be electrified with the second generation of integrated starter generator that produces 15 HP and 180 Nm and will have also the 48V network. In the C 300 it will provide 258 HP as well as in the E-Class facelift.

This will be followed by the Plug-In Hybrid versions for both diesel and petrol which will offer 320 HP for petrol (C 300 e) and 306 HP (C 300 de) and which promise an electric range of 100 km thanks to a larger battery of around 20 kWh.

The dimensions will remain almost unchanged but the range will undergo major changes. The Mercedes C-Class 2021 limousine will appear in the summer of 2021, followed by the T-Model version in a few months. In 2022 will follow the Class C All Terrain for the first time in C-Class but also the new GLC and GLC Coupe. The C-Class convertible disappears from the range and the C-Class coupe will merge with the E-Class coupe and there will be only one coupe as was the case in the previous generation when the coupe called the E-Class was built on the C-Class platform.

In the case of the AMG versions, it seems that the 4-liter twin-turbo V8 engine will disappear from the C-Class.