Mercedes-Benz C-Class All-Terrain gives the wagon a tougher look by raising the ground clearance and equipping the vehicle with standard all-wheel drive. It’s the perfect antidote for people who are sick of crossovers. 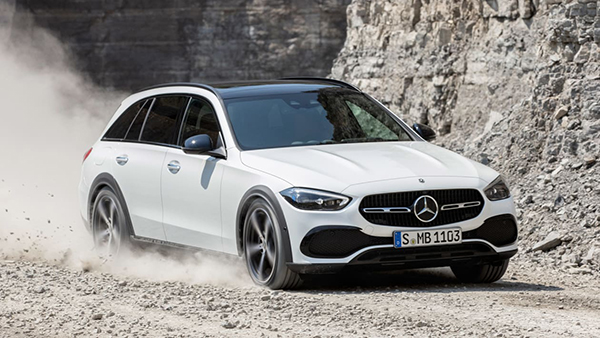 Mercedes-Benz has launched a new car for those who flinch at the thought of owning an SUV – but who still demand a little extra ground clearance – called the C-Class All-Terrain. It’s a more rugged version of the brand’s compact executive estate, which gets four-wheel drive and a raised ride height to give it half a chance when driving off the beaten path.

It’s the second car in Mercedes’s line-up to receive the All-Terrain treatment, following on from the E-Class estate last year. It’ll also become a new rival for the Audi A4 Allroad – but only for European customers, as the C-Class All-Terrain won’t make it to the UK. 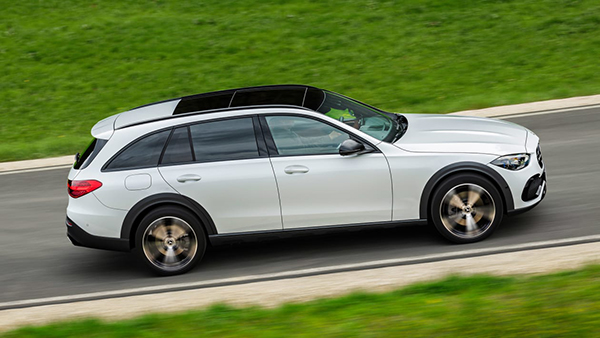 Chassis tweaks over the standard C-Class estate include an extra 40mm of suspension travel, larger steering knuckles and bigger wheels (in sizes from 17 to 19 inches), which Mercedes says makes the car better suited for poor road surfaces. However, unlike the E-Class All-Terrain, the C-Class has passive dampers and conventional springs rather than adjustable air suspension.

The mechanical changes are backed up by some rugged cosmetic revisions, inspired by Mercedes’s range of SUVs. So, there’s a new radiator grille, a redesigned front bumper with a faux skid plate and an unpainted black plastic rear bumper. 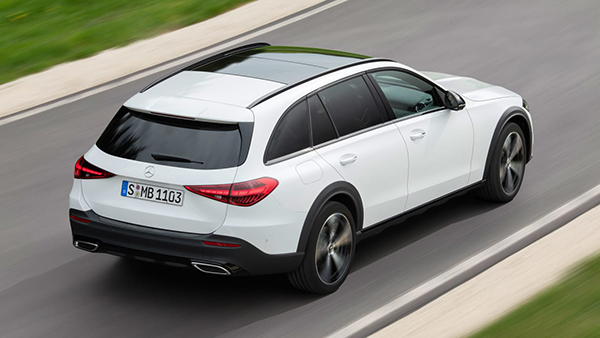 Mercedes has also fitted some new plastic wheel arch flares to clear the larger wheels. They add an extra 21mm to the C-Class estate’s width and are complemented by a fresh pair of grained plastic side skirts. All of the new plastic components can be optionally specified in gloss black with Mercedes’s Night Package.

Inside, there’s a black leather sports steering wheel, an ambient lighting system and a pair of electrically adjustable seats, available in a choice of three leather upholstery finishes – black, macchiato beige and black or brown and black. 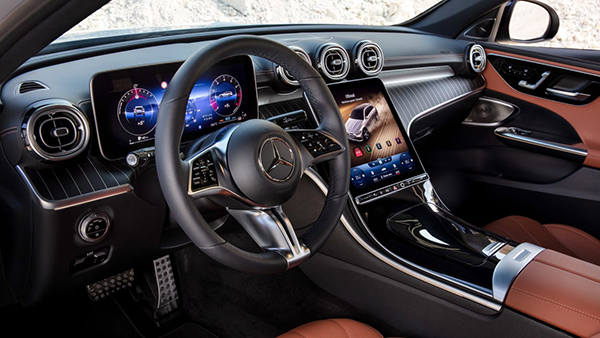 Like the UK-delivered C-Class, the All-Terrain can be specified with an 11.9-inch portrait infotainment system and a 12.3-inch digital gauge cluster. However, the latter screen comes with a new “Off-Road” menu, which displays items such as the car’s incline angle, steering angle and geo-coordinates.

Mercedes also offers a couple of optional extras specifically designed to help buyers tow. These include a partially electric tow-bar and a trailer stabilisation system, which is activated at speeds above 40mph and helps regain control of the vehicle if the trailer starts to fishtail.

There’s also a trailer manoeuvring assistant, which pairs with the car’s 360-degree camera and is controlled using the infotainment. Similar to the system used on larger Mercedes SUVs like the GLS, it aims to make reverse parking with a trailer easier – even for the inexperienced – by taking control of the steering system when parking. All the driver has to do is select the desired steering angle on the touchscreen and the car will maintain the course, automatically correcting the trailer.

Buyers have a choice of two turbocharged 2.0-litre four-cylinder 48-volt mild-hybrid powertrains, both of which come as standard with a nine-speed automatic gearbox. The petrol model develops 254bhp, while the diesel has 261bhp. Both units also have a belt-driven starter-generator, which can deliver an extra 20bhp boost when required.