Mercedes-AMG is still in the early phases of its inevitable transition to full electrification. There are still plenty of cylinders left in the AMG lineup, but they’re dropping like flies. As this progression continues, it will be incumbent on the brand to maintain its performance pedigree without relying on the big, brutish engines that we’ve come to love over the years.

Fear not, though, because even with shrinking powertrains, the Mercedes go-fast department has no intention of slowing down. Case in point: the 2022 Mercedes-AMG C43, which drops the twin-turbocharged V6 of the prior generation in favor of four-cylinder propulsion. And following that, the full-beans C63 will also get a fresh 2.0-liter hybrid powertrain that could make as much as 670 horsepower when it hits the market later this year. I’ll reserve judgment on the latter until that time comes, but as for the AMG-lite C sedan, I’m happy to report that there is still a whole lot to like.

The Heart Of the Matter
The C43’s new turbocharged 2.0-liter mild-hybrid four-cylinder is the same mill from the CLA 45, an AMG-specific engine built in Affalterbach by a single technician (unlike the last-gen V6). Engineers rotated the engine 90 degrees, for a longitudinal fitment and added a new electric exhaust gas turbocharger. This fascinating technology first debuted in Lewis Hamilton’s F1 car, and with some very heavy modification is now ready for roadgoing AMGs.

The turbocharger has its own electric motor placed between the turbine and the compressor wheel on the intake side. This is different from the EQ Boost system, in that it replaces the compressor with a more substantial electric motor. The e-motor powers the turbocharger’s drive shaft before exhaust gas hits it, reducing lag time. With combined power from the exhaust gas and the e-motor, this turbo can hit up to 175,000 RPM producing nearly 50 PSI.

And with the fancy new F1 turbocharger, the engine makes more power than it does in the CLA 45: 402 hp compared to 382. In theory, Mercedes could’ve carried the whole unit over to the C43 with the same conventional turbo, but it didn’t. This electric-assisted unit has a lot more to give in future applications. Suddenly, the insane 650-plus horsepower rumors we’ve heard about the upcoming C63 sound more realistic. Though admittedly, AMG engineers didn’t flinch when this assertion was thrown their way. 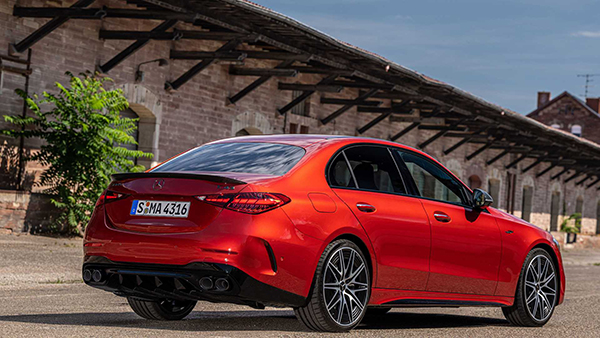 Rainy Day On The Playground
Eager to try this new setup, I ran outside to see a row of C43s parked, absolutely soaking wet in the rain. With the rest of the day left to test the car and no sun in sight, I headed for the hills after getting a tip from an ice cream vendor that the nasty weather tends to break in the higher elevation areas close by. And a big thanks to that guy who will probably never read this, because he was absolutely right.

Getting there was a different story. Leaving the quaint town of Colmar, France for mountain roads, the rain was truly relentless. So much so that I decided to seek temporary shelter off the main highway and admire some of the C-Class’s other features.

My friend and colleague Brett T. Evans laid out the list of what’s new when he drove the 2022 C300 last month. I agree with his main takeaway: the C-Class went through a major glow-up with this generation, influenced by the S-Class more than ever before. With that DNA as the starting point, the C43 looks even better with some tasteful AMG makeup.

This test car had the AMG Night Package, which turns the lights out on many of the important exterior features, like the Panamericana vertical-slat grille. The wheels are now bigger with 20 and 21-inch options to pick from – the latter looks wonderful with its functional aero inserts and brushed metal finish.

Things are even better in the rear with a large trunk lid spoiler and quad-oval exhausts, both of which carry over as C43 signatures from the previous model. It wouldn’t be outrageous to assume this is the fastest model in the range, because the firecracker sedan looks more aggressive than ever.

At first, I thought my affinity for the C43’s cabin was because of its protection from the deluge outside. Thing is, this interior is just fantastic in any scenario. Beneath the 11.9-inch MBUX infotainment screen is a stunning piece of glossy carbon fiber that runs the entire dash. This complements the red-hot seatbelts and matching stitching that borders the door panels and seats.

Those optional AMG Sport seats, by the way, are still a sore point for me – and I mean that literally. With such little cushion, these thrones belong in something that will spend time at an actual track.

Skip those seats and you have the best interior of any car in the segment. With this new C-Class, I hoped that Mercedes would put some more distance between it and the CLA to justify the extra money, and it did exactly that. 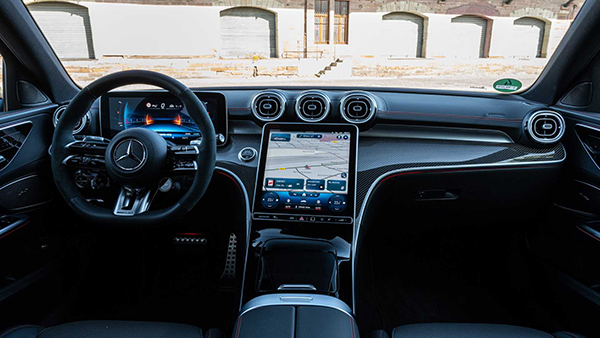 Better Weather
After killing some time asking the voice assistant to tell me jokes, I finally set out to fulfill the ice cream man’s prophecy and put this car through its paces without the wipers on full blast. Thankfully, the rain finally broke, though the roads remained wet.

I started slow, giving the C43 a chance to find its footing in drier conditions. In Comfort mode, the car was compliant with pleasant ride quality from the adaptive dampers. The steering was quick and felt light in the hands. Nothing about its demeanor was too aggressive for everyday driving. But this was far from an everyday drive, so it was time to hustle.

The first few miles of quick driving felt oddly familiar. Different noises from under the hood, sure, but this is still a small-ish sedan that knows how to handle its business around a twisty road. This C43 is trending away from the compact designation, though. It’s four inches longer overall, with an extra inch between the wheels compared to its predecessor. To help mask this growth spurt, every C43 comes with rear-axle steering that gets its power from the onboard 48-volt system.

With all four wheels changing direction, the car turned in with surprising agility. And even with effectively no temperature in them, the Michelin Pilot Sport 4S tires offer exceptional grip all the way through corners. Switching the drive mode to Sport and Sport Plus showed predictably marginal intensity upgrades. The dampers firmed up to keep the car more stable, and the steering feel weighted up. Both of these changes provided more confidence as I encountered tighter hairpins.

But the C43’s party piece is exiting a turn, where its turbocharger kicks in with serious vigor. If reducing turbo lag was the main priority, then mission accomplished, because it felt impossible to catch this powertrain off-guard. The nine-speed automatic would urgently downshift to increase the pace, but with 369 pound-feet of torque available, there was plenty of shove even in a gear too high.

The standard all-wheel-drive system has a fixed setup feeding 31 percent of the power to the front wheels, and 69 percent to the rears. Even in the wet the car never felt precarious or uncontrollable. The C43 is just one of the cars that has the perfect output for a sports sedan.

But there is still an elephant that needs addressing. I won’t say that the four-cylinder sounds better than the prior V6… because it doesn’t. As expected, the four-cylinder lacks the higher-pitch whine that made the V6 so delicious. But AMG loves the drama when it comes to noise and the C43 provides plenty of growls, pops, and snarls. This is the biggest downside of downsizing powertrains, and it’s a price that I’m willing to pay. 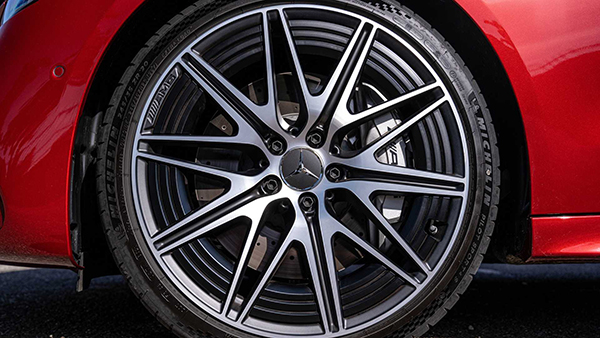 Descending Reflection
Inevitably, the drops on the windshield began to collect again as I started returning down the mountain. While the weather precluded me from experiencing this hot-rod sedan in its full form, it did grant me plenty of time to ponder the car’s place in the modern Mercedes landscape.

We’re still a few months shy of tasting AMG hybrid performance in its most potent form. Both the aforementioned C63 and other models like the AMG GT 63 S E-Performance will indicate whether or not the brand’s transition is going according to plan.

But the C43 is a car that has to balance speed and luxury as equals to do its job well. This second-generation strikes that middle ground even better because of its new engine, not in spite of it. With the days of combustion-powered AMGs inching closer to the finish line, it’s good to see that new models aren’t getting overlooked in the mad rush to electrify.