First thing first, the T-Class is the most affordable vehicle to have the three-pointed star brand, yet that is not the reason you should consider getting one. Instead, it has different attributes that make it a worthy proposal, and one of those is interior space. It may even be suitable as a camper conversion, but that is an entirely different affair. 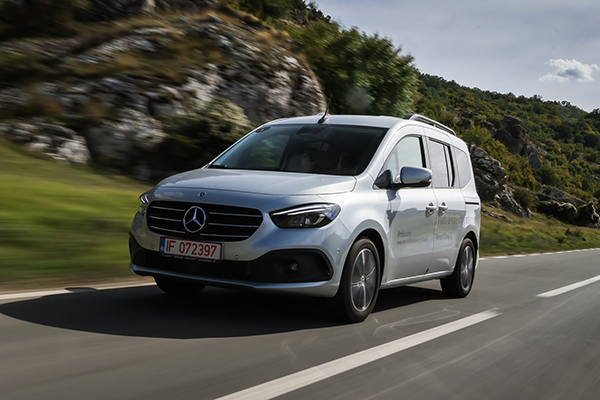 Second, the T-Class is impressively practical, as it has a large trunk, numerous storage compartments for both front and rear passengers, and it has sliding doors for its rear seats, which come in handy in various situations.

Third, the T-Class has five EuroNCAP stars for its safety rating in standard trim, while its platform sibling, the Renault Kangoo, does not. Instead, the French model has four stars, while the German-badged cousin comes with the best rating in the class, matched only by the Mercedes-Benz Citan.

The latter was not eliminated from the range with the debut of the T, as the T-Class is a complementary model to the Citan, at least for now. The Citan will continue to be available in panel van form, while the T-Class is not offered in that form.

The T-Class will later be available in a seven-seat form, with an extended wheelbase, and it is more affordable to get in a more generous configuration than a Citan, Mercedes-Benz Van’s officials have explained.

Mercedes-Benz offers four power levels, split between two engines for the T-Class. There is also an EV variant called EQT, but that one is not among the four variants mentioned above. The line-up starts at 95 metric horsepower with a 1.5-liter diesel and a six-speed manual as standard, and a seven-speed DCT as optional equipment. 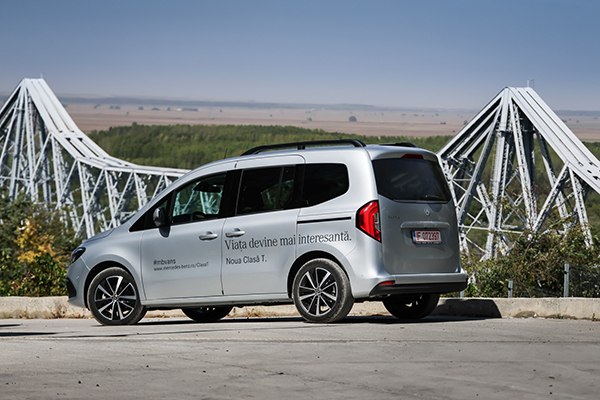 We are writing about a range that has a starting price of EUR 25,741 (ca. $27,447) with tax included, but this model started at EUR 30,633 (ca. $32,664) with all taxes included. However, the demonstration vehicle was priced at EUR 39,658 (ca. $42,287) with all equipment and options as shown. The amount would get you a diesel A-Class with an automatic transmission in Europe, as a reference, but that model will not be as practical as the T-Class can be.

As I noted above, the T-Class’s main selling point is the fact that it is practical and roomy, and it can be economical as well. It even has a fair bit of comfort to it, not to mention safety. It is matched in its five-star configuration by the Ford Tourneo Connect and the Volkswagen Caddy.

The Mercedes-Benz comes with a nicer infotainment unit, including the firm’s MBUX tech. The latter is in a sort of “light” version, so it is not as you might find it on the A-Class, but close enough to be among the nicest in the class, if not the nicest.

Again, this is not a vehicle that is meant to have its owner burst with pride that they are driving a Mercedes-Benz, but one that is practical and familiar in several ways to people who have owned a recent model of the German brand, as target consumers include both empty-nesters and active professionals who are looking for a roomy vehicle that can carry their hobby gear, as well as tow if necessary, without being an SUV. 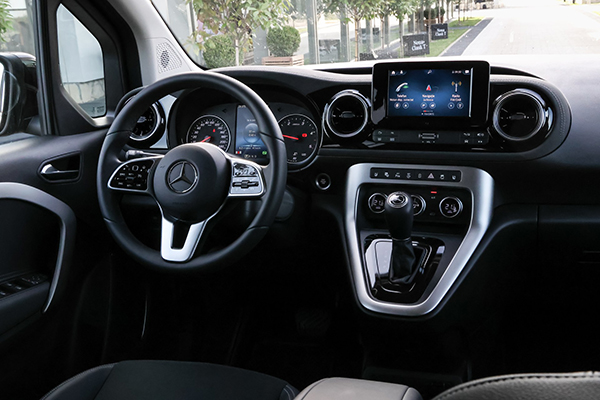 Yes, those customers exist, and Mercedes-Benz Vans technically has two models in its line-up to cater to their potential needs. The T-Class is also suitable for a young, but larger-than-usual family, as it can have three child seats installed side-by-side on the backseat.

The latter part is a rare feature even in this segment, as it involves quite a bit of necessary space to make it work, as well as ISOFIX mounts. The passenger airbag can be deactivated too, so you can install a fourth seat there as well.

Or you like to ride bicycles, but hate those roof mounts, and just want to get your bikes in the back of the vehicle you are driving. The same applies to various other outdoor activities. With a bit of care when handling, you might fit a surfboard inside, but it depends on the kind of board that you have, as well as how you fit it. Measure before you buy just to be safe.

Interior materials are not as good as in an A-Class, but they do not feel bare-bones-cheap either. It is better than the first Citan, for that matter, and it may feel nicer than a Volkswagen Caddy or a Ford Tourneo, but only just a small margin. Soundproofing is sufficient at highway speed, and the vehicle feels more than compliant while driving at a docile pace and sticking to the speed limit.

Think of it like driving to a vacation or a place of leisure, but without having to go faster to catch the ferry or something like that. Your passengers in the rear might not appreciate it if the driver goes a bit too far with speed, as well as with quick successions of hard braking, turning, speeding up again, and so on. The vehicle will manage it and stay on the road for as long as physics allows, but it is not meant for that, and it will feel uncomfortable in the back. 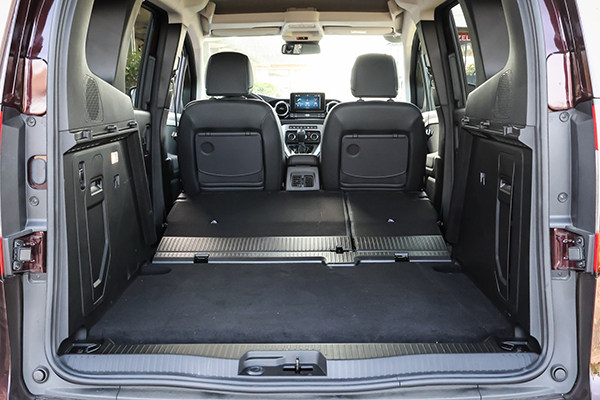 We also got to sit in the backseat for a bit while a colleague was driving, which led to the realization that the rear door cards could have used a bigger elbow rest.

Otherwise, it might be a reasonable compromise for a new vehicle that has five-star safety, all the driver assistance tech that you can expect from an entry-level Mercedes-Benz in 2022, and reasonably attractive styling.

From a driving perspective, it is a comfort-oriented vehicle, with an easy-going steering rack, but firm enough to provide confidence at highway speed. The suspension is soft, but it will feel a bit more planted with more weight on the rear axle, as many passenger versions of van-derived people carriers feel when they are unloaded versus loaded.

Remember, the engineers who configured the suspension made it behave adequately with plenty of weight on the back, so it might feel like its rear becomes bouncy at speed while driving on less-than-ideal roads. Again, this is not a vehicle meant to be driven hard, but one meant to be used for long trips while getting good fuel economy out of the whole deal.

Our drive in the T-Class involved a highway route for two-thirds of our time in it, as well as regular roads for the rest of the time, with minimal city driving.

This resulted in an average speed of 81 kph (ca. 50 mph) for our bit of the route, and an average fuel consumption of 6,0 liters per 100 kilometers (ca. 62 mi), which is the equivalent of 39.20 U.S. MPG with no special effort to save fuel, only normal driving on the road, and even checking out the acceleration of the 1.5-liter mill.