Mercedes-Benz has confirmed it will reveal the T-Class later this year, on April 26, 2022, on its Mercedes me online platform. The model is described as being completely new, and it will be a small van in the premium segment that will be offered both to families and leisure enthusiasts. 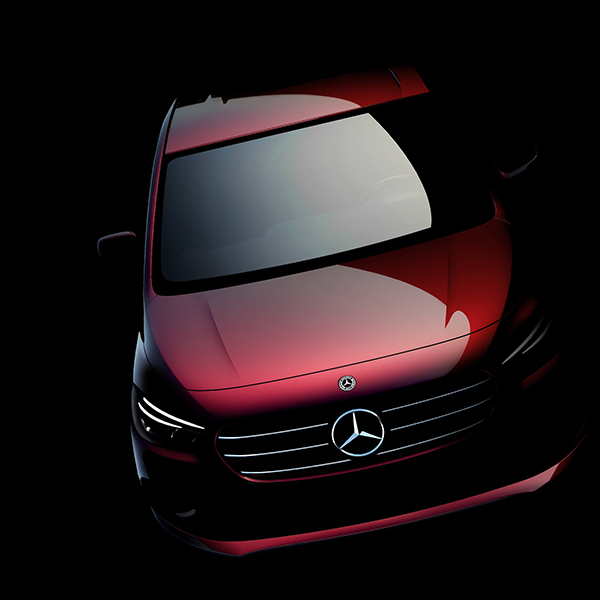 Mercedes-Benz first teased its new T-Class van back in 2020, previewing the van’s shape. A year later, Mercedes introduced the Concept EQT, an all-electric version of its new model. Mercedes said that it would launch the new T-Class in 2022, and it’s keeping that promise. The new van debuts on Tuesday, April 26, and Mercedes has dropped a new teaser to show it off.

The lone image is of the van’s front end, showing the brand’s familiar-looking grille and headlights wrapped in modern Mercedes styling cues. The T-Class differs from the Concept EQT at the front, with the all-electric concept sporting a one-piece grille-and-headlight design that’s unlikely to make its way across the rest of the T-Class lineup. Mercedes will offer the T-Class with a range of powertrains, including gasoline engines that will need grille openings for fresh air to operate.

The new T-Class will join the Citan already in the Mercedes lineup, which got a big redesign for the 2022 model year. The Citan is a joint effort between Daimler and Renault, with the Citan sharing a lot of bits with the Renault Kangaroo. However, Mercedes positions the Citan as a commercial vehicle even though it’s also available as a passenger van.

Mercedes is taking a different approach with the new T-Class, positioning the van as a “premium small van for active lifestyles.” What that means or how Mercedes will differentiate the two waits to be seen. Mercedes’ says the new T-Class will “offer a variable interior,” which suggests some configurability beyond folding down or removing the seats. It’ll come packed with technology and safety tech, too. If the Concept EQT was any indication, the new van will be a nice place to spend time.

Powertrain details remain anyone’s guess, but Mercedes should offer it with a range of gasoline and diesel engines, and possibly hybrids, too. It’s unclear whether Mercedes will reveal the entire T-Class range next month. It could reveal some of the variants, holding the all-electric EQT back for a dedicated event at a later time. We’ll know when Mercedes reveals the new T-Class on Tuesday, April 26 at 2:00 p.m. CEST (8:00 a.m. EDT).