There’s a new arrival in the van-based MPV sector in the shape of the Mercedes T-Class. It replaces the slow-selling Citan Tourer, and is a rival for smaller models such as the Volkswagen Caddy, Ford Tourneo Connect and Citroen Berlingo. However, Mercedes claims that the new T-Class delivers a level of premium luxury that hasn’t been seen in the sector before. 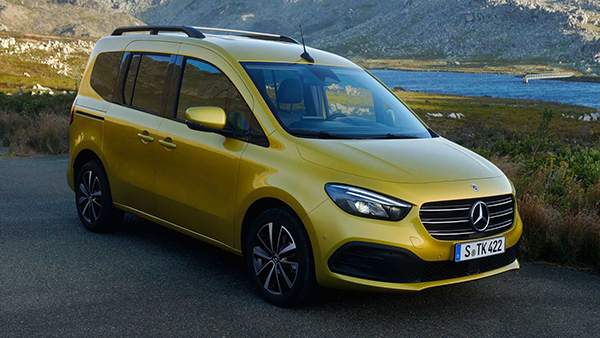 This will be a key selling point for models such as this in the near future, since most manufacturers have now abandoned the pure-MPV class (the latest departure being the Citroen Grand C4 SpaceTourer/Picasso), so it will fall upon van-based models to cater for drivers that need the maximum amount of space from their vehicle.

The Mercedes T-Class is based on the latest Citan small van, which is due to go on sale in the UK in 2023. The people-carrying version is kitted out with more creature comforts and a second row of seats, but the van’s twin sliding side doors are carried over. There’s a top-hinged tailgate at the rear, too, although Mercedes will also offer the option of asymmetric barn-style back doors with glass and wipers. 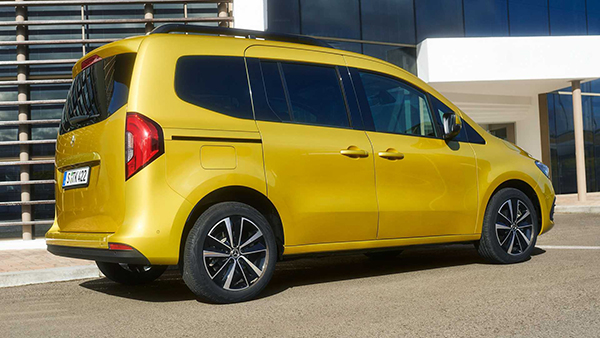 Those sliding doors open to reveal a three-seat layout in the back, but while rivals such as the VW Caddy require you to remove these seats for maximum carrying capacity, the T-Class’s bench fold flat into the floor in a 60:40 split to create a versatile cargo area. An official carrying capacity hasn’t been revealed, but there’s a low sill of 561mm to help with loading heavier items, while Mercedes will offer a variety of accessories to help promote the T-Class as a lifestyle vehicle.

Back-seat passengers have plenty of room, and there are two sets of Isofix mounts with top-tether attachments on the outer two chairs. In addition, the T-Class’s front passenger seat also comes with Isofix as standard. If you need more seating, Mercedes has confirmed that a long-wheelbase T-Class with seven-seats will be revealed later in 2022 as well. 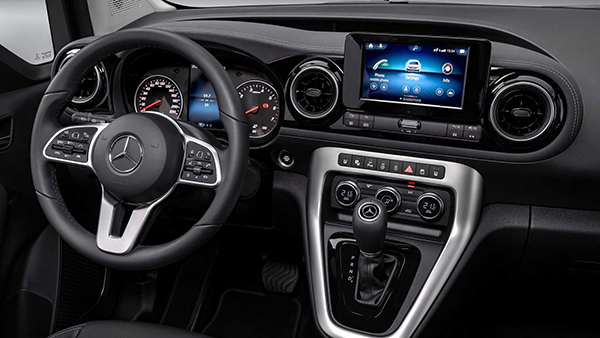 Style and Progressive trims are on offer, and both feature plenty of kit to help separate them from the Citan van. Style cars feature tinted windows and 16-inch alloy wheels, Artico man-made leather trim and gloss black dashboard plastics, which can be specified in vivid Limonite Yellow to give the cabin a lift. Progressive trim adds LED headlights, different artificial leather, electric rear windows for the sliding doors and extra chrome trim elements. 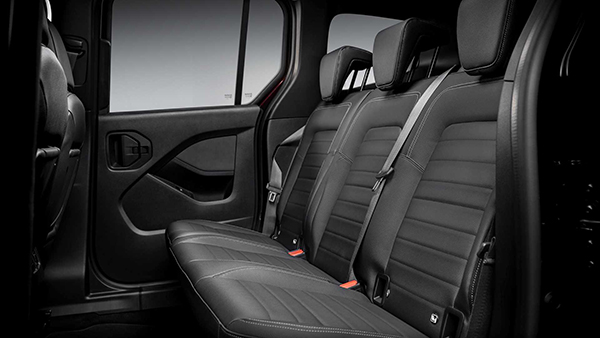 Power comes from a choice of two petrol or two diesel engines, ranging from the 94bhp T 160 d to the 129bhp T 180, all with front-wheel drive. Stop-start helps to save fuel, while six-speed manual or seven-speed twin-clutch automatic gearboxes will be offered. Emissions range from 138-162g/km depending on engine and trim, while 0-62mph figures are quoted between 13.2 and 15.3 seconds.

Pricing and full specifications for UK models will be announced closer to the car’s official launch here, plus we’ll also see an all-electric version, badged EQT, later in the year.