The all-electric Mercedes EQ line-up has gained another member with the new EQT MPV. It sits beneath the EQV as an EV alternative to the T-Class. We expect the EQT will go on sale later this year for around €49,000 (approximately £42,000) in the coming months. 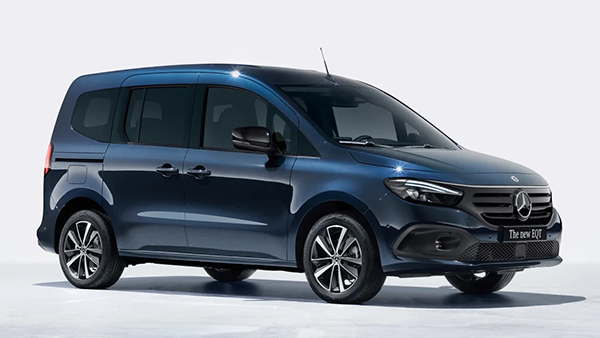 Like the T-Class, the EQT is a van-based people carrier, but an even more practical camper version will arrive later in the shape of the Marco Polo, which has already been previewed by a concept model pictured below.

The EQT uses the same underpinnings as the T-Class and the Renault Kangoo (and Kangoo E-Tech). Like most electric vans and MPVs, there’s not much to distinguish between the EQT and T-Class on the outside, save for a blanked-off grille. A new set of optional LED headlights are visible on the launch model, along with some 17-inch wheels – smaller 16-inch will be standard.

At the side, we can see the same sliding rear doors as the T-Class and the interior features are nearly identical too, with a folding three-seat bench in the second row. The base-spec EQT is trimmed in black fabric upholstery with certain elements finished in man-made synthetic leather, while a long wheelbase version – set to arrive later in 2023 – will offer additional cabin space.

From launch, the MPV offers 120bhp and 245Nm from a front-mounted electric motor, powered by a 45kWh battery mounted within the floor. Official range stands at 175 miles – which is around the same as Stellantis offerings such as the Citroen e-Berlingo, Vauxhall Vivaro Electric and Peugeot e-Partner. Thanks to 80kW DC charging capability, the EQT can replenish its cells from 10-80 per cent in 38 minutes. There’s an onboard 22kW AC charger, too. 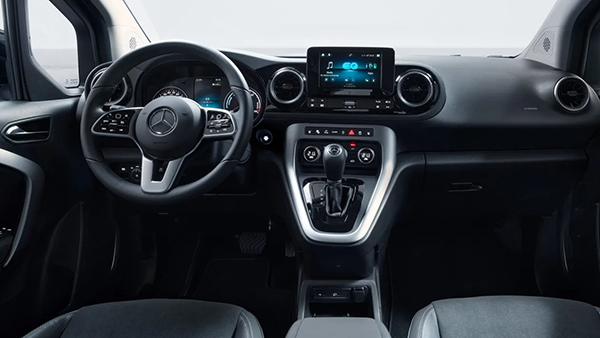 The EQT’s tech suite is built around Mercedes’ MBUX software, albeit with a smaller seven-inch touchscreen to those found in its mainstream models. Changes over the combustion-engined T-Class includes a pair of analogue dials that display speed and energy usage – split by a 5.5-inch instrument binnacle display. A “Hey Mercedes” voice assistant is available at extra cost, but every EQT receives Apple CarPlay, Android Auto and a DAB radio. Hill start assist, a driver fatigue monitor and lane keep assist are also included.

Premium Plus brings the most standard equipment, such as keyless go, exterior chrome trim and bigger wheels, alongside a Navigation Plus package. 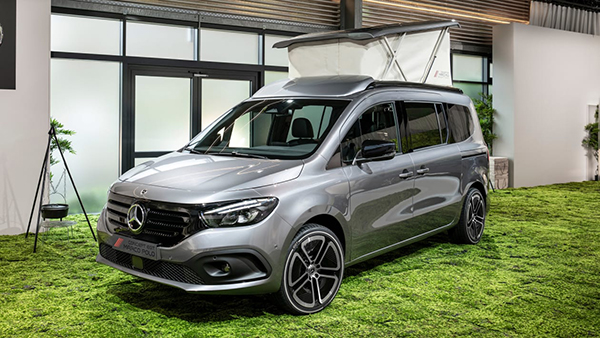 Mercedes EQT Marco Polo Concept
Alongside the EQT, Mercedes has also pulled the covers off a Marco Polo campervan version, which will arrive in the second half of 2023. Taking the long-wheelbase variant as a base, the concept adds a forward-hinged pop up roof, allowing passengers to stand in the rear of the cabin. On the show car, a solar panel has been integrated into the roof for additional power. There’s also a side awning and space for a roof bed, along with a further sleeping area in the main cabin.

The Marco Polo will rival the likes of the Dacia Jogger (provided you’ve ticked the Jogger’s camping package option) and the Volkswagen Caddy Camper with plenty of helpful features to make holidaying in the great outdoors that much easier. Mercedes has fitted a 16-litre fridge and washing facilities behind the driver’s seat, too, and numerous drawers and storage areas have been designed to cater for camping trips. To add to the Marco Polo’s outdoor credentials, there’s an induction hob, gas cooker and an electrically adjustable folding table inside.

The concept has been engineered to be versatile beyond its use as a camper, and Mercedes claims that the interior furniture can be removed by two people in less than five minutes, opening up the space for everyday use.

Standard EQT owners can add elements of the full-blown camper by way of the optional Marco Polo module, which fits into the load bay of the short wheelbase model. It provides a folding bed and optional kitchen facilities, along with window blinds and an insect protection sheet.