Daryl built out a custom 2017 Mercedes Benz Sprinter camper with enhanced accessibility features so he and his wife can travel together.

Patrick, the host of the New Jersey Outdoor Adventures YouTube channel, helps bring to light fantastic camper build of all kinds. This time, he met with Darryl, who transformed a 2017 Mercedes Sprinter 4×4 into a camper van. The 4×4 version is especially sought-after by van lifers, but you should expect to pay significantly more for this option.

Here’s the reason behind the build: Darryl’s wife has a “mobility issue,” so they needed a capable vehicle that could be driven to spots with challenging access, such as beaches. Furthermore, the two are avid tandem cyclists, so they needed space to store their bikes.

I’ll start with the interior – the van follows a typically used layout for campers: the kitchen, followed by a central bathroom, and the bed housed toward the rear. Darryl went for a modern, white aesthetic complemented by wooden details.

The kitchen features a decently sized refrigerator, two beautiful wooden countertops, and a 15-inch (38-centimeter) deep sink. They’re surrounded by many storage spaces, both above and below. One of the best parts about this van is that it’s very configurable. That’s why all utilities, such as the stovetop or microwave, are detachable and are stored separately.

The smaller countertop is on the side of the door. It’s strategically placed so Darry and his wife can prepare food while taking in the surrounding views. A detachable table can also be used while sitting in the driver or passenger swivel seats.

Next up, let me tell you about the bathroom. The area is relatively small, just enough to care for your daily hygienic needs. There, you’ll find a cassette toilet, shower valves, and a stainless-steel pan under the teak flooring, which drains the water. The space also doubles as a closet the couple uses to store their clothes.

The bench seat is located just opposite the shower and boasts a standard seating area, complete with a swivel table. The place does look a bit packed, especially with the table extended, but Darryl made full use of the space. A nice detail for the table is that it features rubber inlays, which provide additional grip, and the raised edges further help prevent things from falling off. 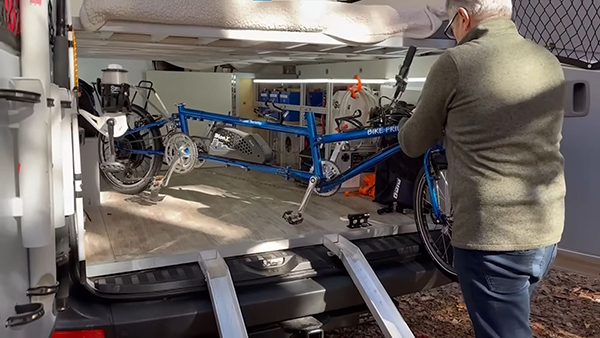 The bedroom is critical for any camper – you need a proper place to rest. Darryl opted for the same modular approach for the space. He chose a 4-inch (10-centimeter) trifold mattress, which can be easily moved if needed; even the bed frame can be detached. Light comes in through two tiny windows with slides on both sides of the vehicle, and the overhead cabinets follow the same design as the rest of the van. Darryl ensured adequate safety by fitting carbon dioxide and smoke sensors near the bed.

Last but not least, we have the garage space under the bedroom, accessed via a small door from the interior or by opening the two rear doors. That’s where the couple stores their bikes, electrical system, as well as some tools. What’s also impressive about this Sprinter’s interior is that most components are easily detachable; even the bedroom side panels can be quickly removed if necessary.

Darryl equipped his DIY build with intricate, hidden-away utility systems. Not wishing to operate with any propane in the vehicle, he opted for diesel instead. There’s also a 17,000 BTU heating system, complete with a blower and heat exchanger. This component is housed right under the smaller countertop, just by the entrance to the van.

The owner adopted a smart approach toward engineering the electrical system – to minimize the use of wires, he devised two separate units, one for each side of the van, with controls for the thermostat and heaters easily accessible on the sides of overhead cabinets.

Part of the electrical system is securely housed inside a metal cage bolted to the floor and boasts three 100 Ah batteries, which can be charged in three ways. Power can be provided by the alternator, the 200 W solar panels, or by the 3000 W inverter.

The van’s exterior doesn’t reflect its insides – besides the small windows, there isn’t any specific indicator that hints toward the finely arranged interior. The underbelly of the Sprinter is where you’ll discover an 18-gallon (68-liter) grey tank.

Clearly, lots of work went into building this 2017 Mercedes Sprinter – its many accessible features make it a wonderful home on the road. At the end of the video, Daryl surprises us by saying this is his first van build, and most of his research was done on YouTube and at RV Shows. Hopefully, his creation will inspire you to embark on your dream DIY project.