In today’s MercBenzKing’s episode, we present to you the all-new Klassen Van based on the Mercedes-Benz Sprinter. Luxurious travel van with a PS5 installed. A new 3.0 Liter 6 cylinder diesel with 190hp. Top speed is around 180km/.

A van has utility in mind, but the space it offers inside makes it ripe for sprucing up. Case in point, take a look at the conversion vans and, more recently, overlanders built around vans. If you prefer the VIP look, the van can handle that too.

Klassen’s Mercedes-Benz Sprinter is a solid example of the VIP theme. From the outside, it just looks like a Sprinter with a different grille, a sportier bumper, and fancier wheels. That said, Klassen’s front kit will give you an idea of what an AMG version of this van might look like should Mercedes-Benz build one.

While the exterior upgrades are relatively mild, it’s the opposite for the interior. At the front area, the dash design is still the same as the standard Sprinter. However, nearly every surface gets brown leather trim, from the steering wheel to the door panels. There is also a refrigerator and a sizable wireless charging pad that doubles as the front armrest. It also gets deep pile carpets for good measure. 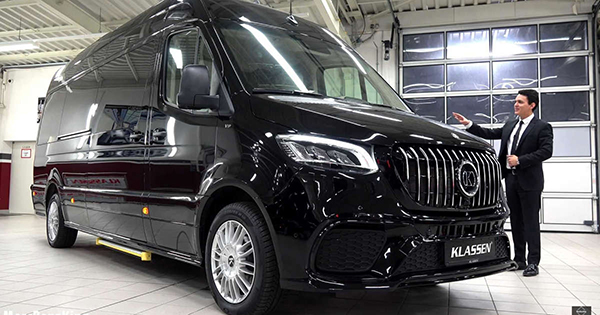 The VIP treatment is at the back with four Ottoman seats and a bench in the fourth row. A control panel on the side controls the ambient lighting and the climate control system. There is also another screen to control the infotainment system, so the passengers don’t have to give instructions to the driver. Other creature comforts include a sliding tray with pop-out tables, a minibar, and blinds to shut out prying eyes.

Moving on to the gadgets and gizmos, the Klassen Sprinter has a TV hanging from its ceiling. While it’s common to have that in luxury conversion vans, the tuning company was kind enough to hook it up with an Apple TV system. But if playing games is what you or your passengers prefer, Klassen also included a Playstation 5 to keep everyone entertained. Audiophiles can also appreciate the van’s surround-sound audio system from the third row.

Klassen did not mention the price for the VIP Sprinter but expected it to be well over $200,000. That makes this van more expensive than a fairly-optioned Mercedes-Maybach S580. Then again, installing a PS5, a minibar, and wide TV is difficult to fit in the flagship sedan, plus you can’t beat the space the van has to offer.